Today leading multi-platform entertainment company Wind Sun Sky Entertainment, announces a partnership with Tafi to bring My Singing Monsters, the award winning musical mobile game with over 115+ million downloads, to the Samsung Galaxy Store’s AR Emoji marketplace. This worldwide phenomenon franchise, helmed by the leading mobile game Big Blue Bubble, is one of the first ever licensed properties to land in the …

Today leading multi-platform entertainment company Wind Sun Sky Entertainment, announces a partnership with Tafi to bring My Singing Monsters, the award winning musical mobile game with over 115+ million downloads, to the Samsung Galaxy Store’s AR Emoji marketplace. This worldwide phenomenon franchise, helmed by the leading mobile game Big Blue Bubble, is one of the first ever licensed properties to land in the Galaxy AR Emoji marketplace, and is in excellent company alongside global brands in the entertainment, athletic and lifestyle space.  This news comes as My Singing Monsters Fandemonium, the ground breaking 8 part live animated variety show, is set to launch on March 12 . 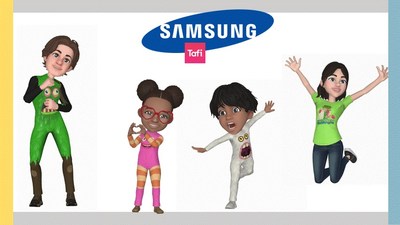 “The world of My Singing Monsters is rapidly expanding into a multi-platform world and this is just another amazing way for its millions of fans to showcase their passion,” said Catherine Winder , CEO, Wind Sun Sky Entertainment.  “Owners of Samsung mobile devices will have the unique ability to customize their avatars with My Singing Monster’s Fandemonium themed onesies and T-shirts. This fun collaboration will be the perfect way to kickoff what we promise will be a big year for the franchise.”

“We are thrilled to be working with Wind Sun Sky and Big Blue Bubble to bring the My Singing Monsters franchise to life through the Galaxy AR Emoji marketplace,” said Tafi Chief Marketing Officer Stephanie O’Farrell .  “We know that game fans are a passionate group and we’re thrilled to give them a unique way to interact with their favorite monsters and celebrate the live interactive animated show MY SINGING MONSTERS FANDEMONIUM.”

My Singing Monsters, developed by Big Blue Bubble, is a beloved and critically acclaimed top-grossing game with more than 115 million players worldwide. The free-to-play, family-friendly title explores rich intriguing worlds as players are engaged in discovery, creativity, and delight by breeding and feeding Singing Monsters to build unique melodies.

Wind Sun Sky Entertainment (WSS) is a Canadian multimedia company led by former LucasFilm executive, Catherine Winder ( Invincible, The Angry Birds Movie 1 & 2, Star Wars: The Clone Wars, Robert Kirkman’s Secret History of Comics ). Based in Vancouver , Wind Sun Sky Entertainment (WSS) builds franchises with a focus on creator-driven content for the global marketplace, producing in all mediums including interactive, film, television (live action and animation), podcasts and mobile apps. Under the WSS umbrella is Skybound North, which provides a unique U.S. based partnership with Skybound Entertainment LA, one of the most innovative media studios in the industry. WSS has recently produced and delivered Invincible, an animated 8 X 1 hr. dramatic adaptation of Robert Kirkman’s comic book for Amazon Prime. Additionally, WSS is in development on the successful Canadian mobile game My Singing Monsters, which is being adapted into television, interactive, merchandise and more. They have also created Camp Bonkers, a kids’ variety show on YouTube and Toonavision, an APP which will launch in 2021 as well as an Audibles podcast for its’ property, Death By Unknown Event. https://windsunsky.com

Founded in 2019, Tafi’s mission is to make personalized avatars and branded digital content available to anyone who wants to level-up their digital personality. Partnering with mobile phone platforms and software applications, Tafi puts its world-class avatar content engine at your fingertips. Learn more at MakeTafi.com .

Big Blue Bubble is an established video game developer with over 15 years of experience creating fun, innovative, and accessible titles. With more than 100 titles to date, Big Blue Bubble maintains a proven track record of being the first to market with a variety of innovations in technology and game design, establishing the company as a long-standing industry veteran. Big Blue Bubble’s commitment to producing fun, engaging games has earned the studio recognition from prestigious organizations around the world, such as Deloitte, BAFTA, and IGN. Big Blue Bubble continues to produce award-winning titles that stand the test of time, including their top-grossing flagship franchise, My Singing Monsters. Big Blue Bubble is a part of the EG7 (SE:EG7) group of companies headquartered in Stockholm, Sweden . More information about Big Blue Bubble can be found at: www.bigbluebubble.com .