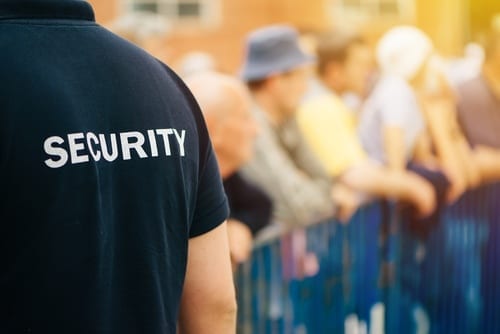 Citizens expect to go about their everyday lives without fearing for their safety. To ensure that right, we entrust law enforcement, security personnel and first responders to keep us safe from potential threats. It’s not a pleasant thing to think about, but the tragedies of recent years have highlighted the absolute need for comprehensive and effective security solutions at every type of public event, from sporting events and festivals to elections and public rallies. In order to preserve public safety, existing security methods are now being reinvented and augmented in ways that allow security professionals to identify and respond to threats as quickly as possible.

By proactively responding to threats, first responders can ensure that individuals that intend to harm the public never get the opportunity. Perimeter security is one of the most effective means through which security professionals and first responders can give themselves a heads up. Security professionals are applying new technology and techniques to make perimeter security work in the modern world, and technology companies are developing tools that could give them that 10 to 15 second advantage that could save lives.

Perimeter security is about a lot more than just walls and fences. The goal of all perimeter security setups is simple: establish a perimeter, identify any potential threats and respond immediately. Once a perimeter is breached, security personnel are expected to respond as quickly and efficiently as possible, making every second of response time critical to the safety of those attending the event.

Due to this, responders work to maintain total situational awareness (TSA) and must be in a position to restore TSA when breached. The use of effective perimeter security techniques helps to ensure that law enforcement, security personnel and first responders are never taken by surprise. With a perimeter clearly established, security personnel following TSA protocols should be well-positioned to respond immediately once a threat has presented itself.

“Perimeter security solutions are evolving to provide first responders with a 10 to 15-second heads up when somebody has been identified as a potential threat and has breached a perimeter. Our research suggests that 10 to 15 seconds can be the difference between life and death,” said Robert Delamar, CEO of First Responder Technologies. “Ten to 15 seconds can save lives, and moving the perimeter out can enable a quick response.”

The first step in setting up perimeter security is designating the boundaries of the perimeter. This is simple for spaces housed entirely within single buildings or contained within a fenced area, but it’s not always so cut and dry. Major events like protests, city marathons, post-sporting event celebrations or festivals can take place over multiple city blocks without clearly defined borders. It’s up to law enforcement and other security personnel to determine the radius of the protected space and identify the access points at which people entering can be monitored.

It’s one thing to be able to track who enters the perimeter, but it’s another to identify security threats. The threat of concealed weapons has become the number one security concern at public events. Public spaces such as festivals have a constant flow of people moving in and out, which can make screening at entry points a slow, cumbersome and in some cases unreliable process. Placing standard metal detectors and bag check stations at entrances can be effective for reducing the risk of concealed firearms and explosives getting inside, but this creates bottlenecks and takes up significant manpower.

First Responders Technologies is developing a perimeter security system that includes the use of Wi-Fi to detect potential threats entering the perimeter of a protected space. The system sends out RF signals that bounce off objects within range. The system then applies machine learning to the received signals to determine if any objects match the profile of a suspicious object such as a firearm, even when items are purposefully concealed. First Responder Technologies is developing its technology so that it can be deployed quickly at entryways as security checkpoints or placed around the perimeter as an expanded perimeter security solution. Liberty Defense Holdings (TSX:SCAN) and Patriot One Technologies (TSX:PAT) have developed similar concepts that use other scanning methods in place of Wi-Fi tech.

“Timely, accurate information provided to persons in authority and/or first responders in the context of a mass shooting or terrorist event can save lives. Having a cheap, easily deployed sensor network that can detect weapons at the perimeter of a property can increase the warning time,” said Mr. Delamar. “Time saves lives in the context of these events.”

By detecting a threat before it manages to get in the door, first responders can intervene without delay. Even if these measures only save a few seconds, those few seconds could be enough to save multiple lives. By combining the use of tried and true perimeter security methods with new techniques and technologies, security personnel can make public spaces more secure, allowing the public to continue its day to day life without worry.

This article was originally published by the Investing News Network in October 2019.

The information contained here is for information purposes only and is not to be construed as an offer or solicitation for the sale or purchase of securities. Readers should conduct their own research for all information publicly available concerning the company. Prior to making any investment decision, it is recommended that readers consult directly with First Responder Technologies and seek advice from a qualified investment advisor.