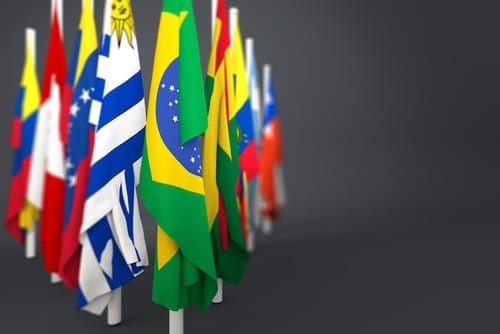 Latin America’s medical cannabis market is home to the first country in the modern era to fully legalize both medical and recreational cannabis.

Uruguay’s legalization of marijuana sparked a wave of more liberal policies toward the medical use of the plant throughout the region. Between 2015 and 2017, countries including Mexico, Colombia, Argentina, Peru, Paraguay and Chile have all established policies allowing the use of medicinal cannabis, hemp or CBD products. With a total population of 620 million people and a potential cannabis patient pool of 68 million, Latin America’s medical cannabis market is quickly emerging as the next stage for global expansion for the world’s leading cannabis companies.

Latin America is already one of the largest trade regions in the world, attracting significant amounts of foreign-investment capital, totalling $161.7 billion in 2017. The region’s low-cost agricultural sector and favorable growing environment has attracted the attention of Canadian cannabis producers such as Canopy Growth (TSX:WEED,NYSE:CGC), which launched a Latin American division in July. Not to be left out, Aphria (TSX:APH) acquired all of Scythian Biosciences’ (TSXV:SCYB) network of cannabis businesses across Jamaica, Argentina and Colombia in a deal worth $193 million. Both companies view the region as a strategic new market in which to deploy capital and have publicly announced Latin American expansion plans targeting key markets such Colombia, Argentina and Brazil.

Mexico: Medical legal and recreational on the horizon

Mexico legalized medical marijuana in June 2017 allowing for the import, sale and consumption of products with less than 1 percent THC as well as the the cultivation and production of derivatives for scientific purposes. Industry experts are already looking to 2019 for legal recreational use and cultivation.

“Canada has already decriminalized, as well as almost half of the states in the United States. What are we thinking? Why are we killing ourselves when North America and many European countries have decriminalized?,” Olga Sánchez Cordero, Mexico’s Interior Secretary and former Supreme Court Judge, said in a recent radio interview. Sánchez Cordero supports legalizing recreational use marijuana as a way of fighting back against the cartel violence surrounding the black market.

With a population of approximately 123.5 million people and access to nearly 11.7 million patients for medical cannabis, the country is expected to become one of Latin America’s leading cannabis markets. It’s North American address and high rank among the world’s largest economies makes it a prime destination for Canadian companies looking to expand into other emerging cannabis markets.

In May 2018, the CannaMexico World Summit brought together companies across a variety of fields including scientific research, finance, medicine, government, technology, and agriculture to participate in open discussion about medical cannabis. The first-of-its-kind conference was hosted by former Mexican President, Vicente Fox Quesada..

“Our objective is to push forward the process of legalization through informing and educating Mexican authorities of legalization’s economic advantages,” Fox Quesada said of the event. The former president turned advocate for medical marijuana told cannabis-focused online magazine Civilized that, “[t]here is a lot of pressure from citizens aimed at authorities to start discussions on the topic of cannabis. The first step was taken by allowing medical use of cannabis but we need to go for the ‘whole enchilada’ and achieve full legalization.”

Fox Quesada recently joined the board of directors for the newly TSX venture-listed Khiron Life Sciences (TSXV:KHRN), the first company to become fully-licensed for cultivation, production and distribution in Colombia. “His appointment to our board also significantly expands our scope of influence and relationships within Latin America’s medical cannabis market,” said Khiron CEO

Alvaro Torres. In Mexico, Khiron is watching for the government to begin allowing imports of cannabis from Colombia by early 2019 and plans to incorporate a Mexican subsidiary to begin the licensing process.

Colombia: a contender on the global cannabis stage

Colombia’s own medical marijuana market is on the road to becoming a powerhouse on the global cannabis stage. Domestically, the country has a population of 48.8 million and is home to 6 million potential cannabis patients. Colombia has the most comprehensive medical marijuana framework in Latin America, allowing for the sale and export of low and high THC-based medicinal cannabis extracts, but not flower. Under the regulations, two license types are available: cultivation of cannabis plants and manufacturing of cannabis derivatives. Cannabis companies are allowed to hold both licenses, meaning manufacturers of cannabis derivatives can cultivate their own flower, allowing for vertical integration.

Colombia’s licensed producers are now working on plans to export medical-grade cannabis extract products to Canada and other emerging medical cannabis markets, especially in Latin America. Recent estimates show Colombia could supply as much as 44 percent of global demand for medical cannabis in 2018.

When it comes to overall global trade, Colombia is already an established agricultural leader and ranks second in the Latin American region in the World Bank’s Doing Business annual report. A member of the Organization for Economic Co-operation and Development, Colombia has free-trade export agreements with most of its neighbors as well as countries in the EU and North America.

As part of its plan to expand into Latin American, Canopy Growth acquired Colombian Cannabis in a deal suggested to be worth $96 million in Canopy stock, reports Financial Post. Renamed Spectrum Cannabis Colombia SAS, the company owns a 126-hectare farm and plans to begin building value-added production facilities in 2018. Aphria has a 90 percent stake in Colcanna, a local medical cannabis producer with licenses for the extraction, production, research as well as the importation and exportation of medical cannabis products. Khiron recently became the first company in Colombia to receive licensing for CBD-based skin care products.

Cannabis markets are advancing in all three of North America’s economies, and now South America’s top economies are beginning to turn green as well. Colombia ranks third in GDP among its South American neighbors. The remaining top five economies on the continent are Brazil, Argentina, Chile and Peru — all of which may be on their way to joining their sister nation in the region’s emerging cannabis market.

In July 2018, Brazil’s Worker’s Party members introduced a house bill to legalize cannabis for both medical and recreational use. Brazil is the most populated nation in the region with 200 million people. Support for the bill is high amongst the country’s citizenry with 57 percent reporting a favorable view of legalization in a government survey. For now, legal cannabis use in Brazil is limited to specialty cannabis oil products for therapeutic purposes.

Argentina legalized cannabis research and medical marijuana in March 2017 with the government regulating prescriptions and distribution of cannabis oil products to patients. Production remained illegal under the 2017 legislation so the country has relied on imported cannabis products. However, in July 2018 the government announced it was allowing cultivation to commence on a three-hectare farm in Jujuy Province. “[In the future] Jujuy will provide cultivation, extraction of cannabis and the future development of a medicine factory in the province, which will deliver to all the hospitals in the country,” said the Minister of Health for northwestern province Jujuy, Gustavo Bouhid. “And [there will be] the future possibility of commercialisation in a public-private undertaking.”

In October 2017, Peru became the sixth country in Latin America to legalize cannabis for medical use. The country’s lawmakers voted 68-5 to allow medical cannabis oil to be locally produced, imported and sold. The legislation followed the controversial police raid in February of that year on a makeshift operation run by a group of mothers producing cannabis oil for their children who were suffering from ailments such epilepsy and tuberous sclerosis.

Chile’s government authorized the cultivation and sale of medical cannabis products in 2015 and pharmacies began sales in 2017. The country is also home to the largest medical cannabis farm in the Latin America region. In May 2018, at least 80,000 people marched through the capital city  of Santiago, calling for legalization of recreational cannabis.

This INNspired article is sponsored by Khiron Life Sciences (TSXV:KHRN). This article was written according to INN editorial standards to educate investors.