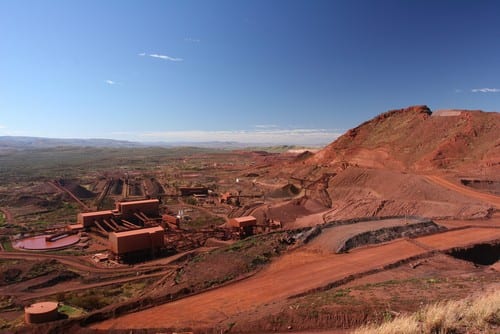 High-grade iron ore pellets are in high demand as China looks to fight air pollution while maintaining its economic growth.

Faced with a changing climate and the societal impact of harmful pollutants, many industries are increasingly shifting their focus to more sustainable and environmentally conscious manufacturing practices. As global economic powerhouse China looks to surpass the United States as the world’s largest economy, the Asian nation is dealing with an enormous amount of industrial-related air pollution. The heavy smog rampant in many of its major industrial hubs is having a devastating impact on Chinese citizens’ health as well as crop yields. In fact, each year air pollution in China kills an average of one million people. The early deaths on top of lost crop production are costing the economy an estimated US$38 billion annually.

To put a stop to the loss of life and drain on the economy, China has declared a war on pollution. Chinese President Xi Jinping has described this war as one of the “three critical battles” his nation faces alongside ending poverty and protecting against financial risk. Recently the environmental crackdown has begun to influence China’s steel industry, which is now considered the country’s biggest industrial polluter. As the largest steel producer in the world, China accounted for nearly half of total global crude steel production in 2018.

Black Iron Inc., developers of the Shymanivske iron ore mine in Ukraine, is ranked by market intelligence group CRU as having the lowest projected operating costs and second-lowest capital intensity of all iron ore pellet feed development projects in their database.Send me an Investor Kit

The Chinese government is imposing new ultra-low emissions standards on steel producers which ultimately could result in increased demand for high-grade iron ore pellets and pellet feed resulting in higher price premiums for these products. Pellets typically trade at a premium because they have environmental and productivity benefits over other iron ore products used in steel manufacturing. “China’s demand for iron ore pellets and high-quality ore is expected to accelerate in 2020 as a result of Beijing’s push to shift dozens of steel mills to coastal regions in its battle to stop smog blanketing industrial cities,” reported Reuters.

The increasing demand for pellets has created opportunities for resource companies with high-grade iron ore projects. “Iron ore producers who can sell pellet-feed into China will be better placed than those who don’t have such products,” said Ian Roper, general manager at Chinese metals market research company Shanghai Metals Market.

Over the past few years, China has been targeting coal-powered electricity plants in its campaign to curb pollution. Now the nation’s leaders are shifting focus to steel manufacturing plants, which have replaced coal-powered plants as the country’s biggest pollution emitters in the industrial sector. “In 2017, the emission of particulate matter in the steel sector was 2.81 million tonnes, making up 20 percent of the total emissions of PM in China,” according to He Kebin, dean of the school of environment at Tsinghua University in Beijing.

Steel is a high demand commodity in countries such as China that are experiencing significant economic growth. The strong alloy metal is widely used in major infrastructure projects as well as in products associated with a rising middle class, such as cars and home appliances. Iron ore is one of the main materials used in the fabrication of steel, with 98 percent of all mined iron ore destined for use in steel making.

Many of China’s steel manufacturing plants use what’s known as “sintering”, a dirty process that involves mixing low-grade iron ore with other products including coking coal. The sintering stage is considered the most polluting of the steelmaking process. However, steelmakers can bypass the sintering process by using iron ore pellets with high grades of 64 percent or more. By switching to less carbon-intensive iron ore pellets, steel manufacturers can cut sulfur dioxide and nitrogen oxide emissions by between 47 percent and 95 percent.

The Chinese government is offering financial assistance and tax breaks to incentivize steel manufacturing plants to complete the upgrades required to meet the new emissions standards. China’s goal is to have 80 percent of existing plants make this transformation by 2025. Reuters has reported that more than 50 Chinese steel companies are planning to replace old relatively small steel mills that use sinter plants with bigger, more efficient furnaces resulting in almost 25 million tonnes of capacity coming on-line in 2020. Another 33 companies are expected to build out 47 million tonnes of new capacity in the next three years.

On the supply side, global iron ore production totals 1.5 billion tonnes annually of which approximately 60 million tonnes is high-grade (67 percent or higher iron content), according to a research report by Tormont 50 Group. In an already tight market, the world’s leading high-grade iron ore producers in Brazil and Australia are experiencing significant supply constraints. “Australian miners are depleting iron ore resources with low impurities and replacing them with lower-quality, higher impurity resources,” said Tormont 50 Group. “In Brazil, the January 2019 Vale (NYSE:VALE) tailings dam collapse and its aftermath, which resulted in the country banning all cheap upstream dams, is likely to reduce global iron ore production by around 75 million tonnes per annum.”

There are a few iron ore projects under development and exploration that have the potential to supply high-grade iron ore to the steel market outside of Brazil and Australia. In Canada, Alderon Iron Ore Corp’s (TSX:IRON) development-stage Kami project is situated near three producing iron ore mines and has the potential to produce high grade (65.2 percent) iron ore concentrate with ultra-low impurities. Results from metallurgical testing at privately-held Afferro Mining’s Ntem project in Cameroon have shown iron grades of 65.2 to 68.5 percent iron and the potential for a low-cost operation.

Black Iron’s high-grade (68 percent iron) Shymanivske project in Ukraine ranks as having the highest development stage IRR (at 36 percent) for an iron ore project, according to market intelligence firm Wood Mackenzie due to the close proximity of rail, power, ports and skilled labor. CRU has said the project has the potential to boast the lowest operating costs (at US$31/t) for an iron ore project globally if put into production. In pursuit of this goal, Black Iron recently signed an MOU with Glencore plc (LSE:GLEN) for an investment in project construction in exchange for purchasing future product.

China has shifted the focus of its environmental policies to tackle harmful emissions from steel manufacturing plants while still producing the materials needed to feed its growing economy. To meet both its environmental and productivity goals, Chinese steel manufacturers are turning to cleaner-burning, more cost-effective pellets and pellet feed. With the global supply of high-grade iron ore tightening, new resources could be needed to match rising demand.

The information contained here is for information purposes only and is not to be construed as an offer or solicitation for the sale or purchase of securities. Readers should conduct their own research for all information publicly available concerning the company. Prior to making any investment decision, it is recommended that readers consult directly with Black Iron and seek advice from a qualified investment advisor.