US Defense Stocks Rocket Through 2019 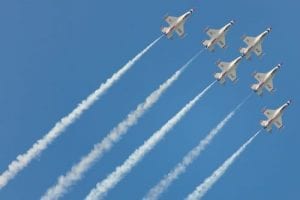 Major defense contractors in the US have been posting impressive gains year-to-date on the NYSE, and Trump is part of the reason why.


This year has proven a boon for some industries, while others are struggling under the volatile weight of the trade war between the United States and China.

One industry in particular in the United States has been steaming along quite nicely, especially given President Donald Trump’s efforts to increase government spending in the sector by 4.7 percent to US$750 billion for the 2020 fiscal year.

The sector? Defense, for which the United States already has the largest military budget in the world — and the big corporate names in the sector have been reaping the benefits as 2019 rolls on.

While the final US budget to be agreed upon didn’t quite reach the US$750 billion Trump wanted, it got pretty close, with US$738 billion to be splashed on military spending in the 2020 fiscal year — if the House of Representatives passes a two year budget and debt limit deal on Thursday (July 25).

Some of the big names that have seen gains through 2019 are companies like L3 Technologies (which has merged with Harris to become L3Harris Technologies (NYSE:LHX)), which develops advanced defense technologies in communications, Lockheed Martin (NYSE:LMT), which leads the development and manufacture of the F-35 multirole combat aircraft and is the largest defense contractor globally, and General Dynamics (NYSE:GD), which is perhaps best known for building the M1 Abrams main battle tank.

These companies aren’t just up by a few percentage points year-to-date in 2019 — many of the major defense contractors in the United States are up by significant double digits.

“Defense stocks have performed very well,” said Robin Lineberger, who is the global aerospace and defense industry leader at Deloitte.

He said that defense stocks are outperforming the S&P 500 Index (INDEXSP:.INX) by a significant margin so far, with the index up by 21 percent year-to-date, while the aerospace and defense industry index is up by over 35 percent.

The stocks mentioned by Lineberger have since continued upwards, with Leidos up by 81 percent, L3Harris up by 49 percent, Lockheed Martin up by 39 percent, Northrop Grumman up by 42 percent and Science Applications maintaining its gain.

“Other international defense stocks have performed more in line with the broader market, reflecting an uptick in global defense spending, but still below the growth in US defense budgets,” said Arment.

In explaining the US sector’s performance so far, Arment said that the US president’s push for more spending on the military has been a big driver.

“Trump’s recapitalization plans for the DoD (Department of Defense) budget have been a major factor in current performance, as revenues are poised to grow through at least 2021.”

Lineberger noted that the US sector’s expansion into foreign markets and those of US allies is another driver for the sector’s performance.

“US defense companies are expanding into foreign markets rapidly, taking advantage of the geopolitical tensions in the Middle East and elsewhere. The US defense industry is generating billions of dollars worth of exports that are increasing year-on-year in the long term.”

Though like Arment, he said that Trump is a factor.

“Moreover, President Trump’s focus on strengthening the US military is driving the growth of the sector and, in turn, the stocks.”

Speaking of stocks, besides the performances already noted, a roll call of major defense contractors in the US backs what Arment and Lineberger have said about the sector overall.

A major player that has been in the news — Raytheon (NYSE:RTN) — was up by 20 percent year-to-date when news that it would be part of a merger broke in June. It has maintained that position since then, with the company up by 23 percent as of late July.

Raytheon is the world’s largest producer of guided missiles, and in June it was revealed it and United Technologies (NYSE:UTX) were looking at a “merger of equals” in a deal that would create one of the largest defense contractors in the world.

On whether the growth across the sector is sustainable going forward, Arment said that it is indeed very sustainable for the next few years given Trump’s campaign promises and continued interest in revitalizing the US military.

Lineberger also said that there are plenty of other factors boosting the US economy that are pulling the defense sector up as well.

“Macroeconomic statistics like the unemployment rate and GDP growth are boosting US economic growth prospects, setting the stage for more upside in the defense industry, since a strong economy typically supports defense funding.

“With nations like Japan and India raising their defense budgets, this strong performance is expected to continue in the near term. Moreover, improved margins and the large US defense contractors’ shareholder-friendly actions (using excess cash to reward their shareholders) will likely drive strong stock price performance in the future too.”

The president’s interest in increasing funding for the US military isn’t the only card on the table though — he has also been adamant in his campaign for America’s allies to increase their own defense budgets, continually saying throughout his term that America’s NATO allies are foregoing their responsibilities to maintain defense spending at 2 percent of their GDP.

NATO recently announced that overall, its members will be increasing their defense budget expenditures for the fourth year running.

“Though the defense budgets of European countries remain far smaller than (that of) the US, spending levels will likely rise in some NATO member countries, driving the investor expectations of defense stocks,” said Lineberger.

Click here to learn more about the defense industry and investing in US defense stocks.


Grab Your Report!
See our exclusive index of companies on the move
EXPLORE