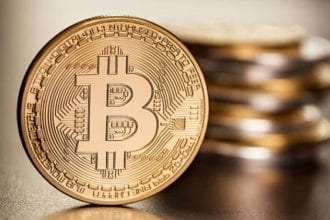 The bitcoin price reached a high of $3,500–what’s next for the cryptocurrency giant?

If it seems as though bitcoin is regularly breaking new records–that’s because it is.
On Tuesday (August 8), the cryptocurrency monster soared to its latest record high of $3,500 a token, which is more than triple the value it was at the beginning of 2017. By Wednesday (August 9), however, bitcoin stepped back slightly to $3,357.27 as of 2:48 p.m. EST.
When compared to precious metals like gold, the price of bitcoin has surged roughly 236 percent year-to-date, while the yellow metal has only increased 11 percent–from $1,150 an ounce to $1,276.67–as of 3:17 p.m. EST Wednesday.

Give me my free report!
In an interview with CNBC, Thomas Lee, co-founder of Fundstrat said that over time, bitcoin “would be seen as an alternative to gold.”
“I think bitcoin is going to have increasing institutional sponsorship given the pending trading of bitcoin options and bitcoin futures,” he continued.
Similarly, Brian Stutland, managing member of Equity Armor Investments said in a Futures Now video interview with CNBC that cryptocurrency is a type of exchange that can be traded more freely without having to go through a third party.
“Obviously that makes it easier instead of carrying around a bag of gold on [my] shoulder and exchanging that, I can walk in and have my iPhone and pay somebody in bitcoin,” he continued.
Despite bitcoin’s impressive percentage gains this year–much like other safe haven assets, such as gold–the cryptocurrency isn’t immune from volatility.
According to a Financial Advisor article, while the rules surrounding cryptocurrencies are in a transition period, its volatility is also going up. As the price of bitcoin increases, so does its risk factors, the article states.
“The latest price jump has the hallmarks of a kind of relief rally, as traders bet it can ride out those changes to its underlying market structure.”
Still, that doesn’t mean it’s bad new by any stretch for the digital currency. With the implementation of bitcoin cash on August 1, the Financial Advisor writes while bitcoin cash has gone down, bitcoin has continued trending upward. “That reassures those faithful to the core bitcoin currency.”
As a result, a number of analysts are bullish on bitcoin’s long-term outlook, which poses the question, “how high can the bitcoin price go, and why?”
Ronnie Moas of Standpoint Research projects that bitcoin can reach $5,000 by 2018, Quartz reported. According to Moas, he said it would not be surprising to see cryptocurrencies account for 4 percent of global investments by that point.
The report suggests that the latest innovation the cryptocurrency community, the Lightning Network, will be instrumental in bitcoin’s price increase. CNBC further states the newest development will enable immediate transactions.
“The Lightning Network is a game-changing innovation, which utilizes smart contract technologies to enable instant micropayments using cryptocurrencies such as bitcoin,” Aurélien Menant, founder and CEO of Gatecoin told the publication.
The article goes on to say that the bitcoin network has approved an additional new software called ‘segregated witness’, or SegWit, which will help facilitate additional transactions.
As such, Arthur Hayes, CEO of BitMEX told Business Insider that SegWit will “solve bitcoin’s scaling problems.”
“With Segwit implemented, I believe $5,000 Bitcoin is within striking distance,” he told the outlet.
Don’t forget to follow us @INN_Technology for real-time news updates!
Securities Disclosure: I, Jocelyn Aspa, hold no direct investment interest in any company mentioned in this article.