New Age Metals Inc. (TSXV:NAM; OTCQB:NMTLF; FSE:P7J.F) is pleased to announce that through its Lithium Division, Lithium Canada Developments (LCD) it has acquired 100% of the Lithman West Extension Project, by way of staking, in southeast Manitoba.

New Age Metals Inc. (TSXV:NAM; OTCQB:NMTLF; FSE:P7J.F) is pleased to announce that through its Lithium Division, Lithium Canada Developments (LCD) it has acquired 100% of the Lithman West Extension Project, by way of staking, in southeast Manitoba. The project has good infrastructure and is located in a region known for mining in the province.

The new Lithman West Extension Project consists of 12 claims for a total of an approximately 2725 hectares (6734 acres) (Figure 1). It is located approximately 4 kilometers west from the Tanco Mine Site. The world-class Tanco Pegmatite has been mined for Tantalum, Cesium and Spodumene (one of the primary Lithium ore minerals) in varying capacities, since 1969 at the Tanco Mine.

The Tanco Pegmatite has been postulated to be situated in a limb of a fold. The axial plane trace of this fold runs through both projects and therefore the potential of the area to host a similar pegmatite such as the Tanco Pegmatite is the exploration goal of the Lithman West and Lithman West Extension.There also are several other axial planes of regional folds that run through the project area. 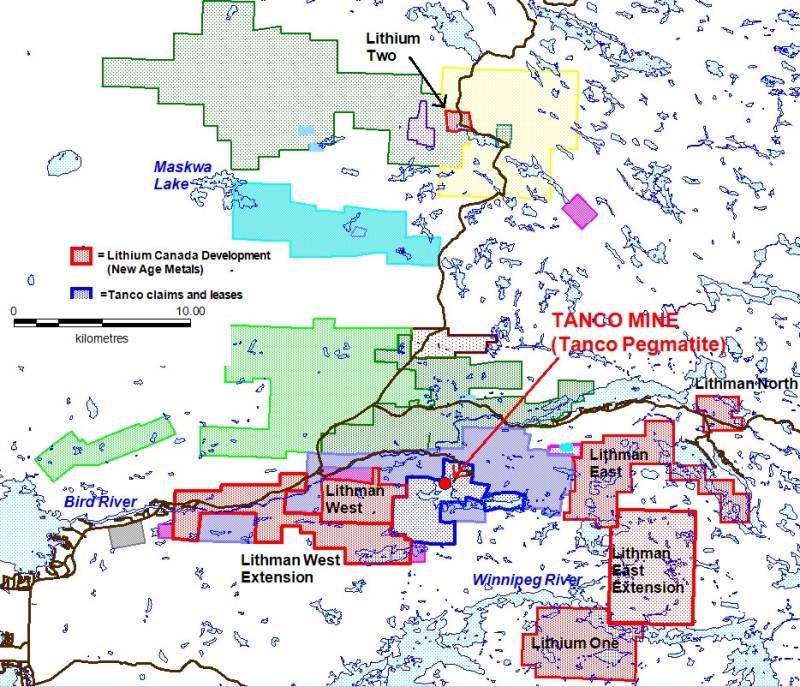 The pegmatites in this region of southeast Manitoba are described as being a part of the Winnipeg River Pegmatite Field. Several large lithium-bearing pegmatites exist in this region and exploration activity in the region is increasing (Figure 3). This pegmatite field is host to the world-class Tanco Pegmatite, which is a highly fractionated Lithium-Cesium-Tantalum (LCT Type) pegmatite and has been mined in varying capacities since 1969. The LCT-type pegmatites can contain large amounts of spodumene (one of the primary ores used in hard rock lithium extraction) and are a primary geological target in hard rock lithium exploration. They also can contain economic qualities of tantalum and cesium as well as other lithium bearing minerals such as mica.

Figure 3: Idealized outline of the Winnipeg River Pegmatite Field and the location of the world-class Tanco Mine which has been in operation since 1969.

Work permits have been applied for with the province of Manitoba for surface exploration. Once the permits are granted, field crews will be mobilized. Exploration on the Lithman West Extension Project will consist of prospecting and sampling the known surface pegmatites and their surrounding areas with the objective to outline new drill targets.

The recent project acquisition of this new project has made the New Age Metal/Azincourt Joint Venture the largest claim holder for Lithium Projects in the Winnipeg River Pegmatite Field. At present, the Joint Venture has seven projects in the pegmatite field exploring for lithium-bearing pegmatites.

NAM’s flagship project is its 100% owned River Valley PGM Project (NAM Website – River Valley Project) in the Sudbury Mining District of Northern Ontario (100 km east of Sudbury, Ontario). Presently the River Valley Project is North America’s largest undeveloped primary PGM deposit with Measured + Indicated resources of 160 million tones @ 0.44 g/t Palladium, 0.17 g/t Platinum, 0.03 g/t Gold, with a total metal grade of 0.64 g/t at a cut-off grade of 0.4 g/t equating to 3,297,173 ounces PGM plus Gold and 4,626,250 PdEq Ounces (Table 1). This equates to 4,626,250 PdEq ounces M+I and 2,713,933 PdEq ounces in inferred (see March 21st, 2018 press release). Having completed a 2018 NI-43-101 resource update the company is finalizing its 2018 exploration programs which will include geophysics, and extensive drill programs, which are all working towards the completion of a Preliminary Economic Assessment (PEA).Our objective is to develop a series of open pits (bulk mining) over the 16 kilometers of mineralization, concentrate on site, and ship the concentrates to the long-established Sudbury Metallurgical Complex. Alaska: April 4th, 2018, NAM signed an agreement with one of Alaska’s top geological consulting companies. The companies stated objective is to acquire additional PGM and Rare Metal projects in Alaska. On April 18th, 2018, NAM announced the right to purchase 100% of the Genesis PGM Project, NAM’s first Alaskan PGM acquisition related to the April 4th agreement. The Genesis PGM Project is a road accessible, under explored, highly prospective, multi-prospect drill ready Pd-Pt-Ni-Cu property.

The results of the new resource estimation are tabulated in Table 1 below (0.4 PdEq cut-off).

1. CIM definition standards were followed for the resource estimation.

5. Numbers may not add exactly due to rounding.

6. Mineral Resources that are not mineral reserves do not have economic viability

7. The quantity and grade of reported inferred resources in this estimation are uncertain in nature and there has been insufficient exploration to define these inferred resources as an indicated or measured mineral resource and it is uncertain if further exploration will result in upgrading them to an indicated or measured mineral resource category.

The Company has seven pegmatite hosted Lithium Projects in the Winnipeg River Pegmatite Field, located in SE Manitoba, with focus on Lithium bearing pegmatites. Three of the projects are drill ready. This Pegmatite Field hosts the world class Tanco Pegmatite that has been mined for Tantalum, Cesium and Spodumene (one of the primary Lithium ore minerals) in varying capacities, since 1969. NAM’s Lithium Projects are strategically situated in this prolific Pegmatite Field. Presently, NAM is the largest mineral claim holders for Lithium in the Winnipeg River Pegmatite Field. On January 15th 2018, NAM announced an agreement with Azincourt Energy Corporation (see Jan 15, 2018, Feb 22nd, 2018 and April 11th, 2018 Press Releases) whereby Azincourt will commit up to $4.35 million dollars in exploration, up to 3.5 million shares of Azincourt stock to NAM, up to $210,000 in cash, and a 2% net smelter royalty on all 7 projects. Exploration plans for 2018 are currently in progress, whereby a minimum of $600,000 will be expended this year. For complete details on the terms and conditions of the NAM/AAZ option joint venture please see the press release dated Jan 15th, 2018.

The contents contained herein that relate to Exploration Results or Mineral Resources is based on information compiled, reviewed or prepared by Carey Galeschuk, a consulting geoscientist for New Age Metals. Mr. Galeschuk is the Qualified Person as defined by National Instrument 43-101 and has reviewed and approved the technical content of this news release.

Cautionary Note Regarding Forward Looking Statements: This release contains forward-looking statements that involve risks and uncertainties. These statements may differ materially from actual future events or results and are based on current expectations or beliefs. For this purpose, statements of historical fact may be deemed to be forward-looking statements. In addition, forward-looking statements include statements in which the Company uses words such as “continue”, “efforts”, “expect”, “believe”, “anticipate”, “confident”, “intend”, “strategy”, “plan”, “will”, “estimate”, “project”, “goal”, “target”, “prospects”, “optimistic” or similar expressions. These statements by their nature involve risks and uncertainties, and actual results may differ materially depending on a variety of important factors, including, among others, the Company’s ability and continuation of efforts to timely and completely make available adequate current public information, additional or different regulatory and legal requirements and restrictions that may be imposed, and other factors as may be discussed in the documents filed by the Company on SEDAR (www.sedar.com), including the most recent reports that identify important risk factors that could cause actual results to differ from those contained in the forward-looking statements. The Company does not undertake any obligation to review or confirm analysts’ expectations or estimates or to release publicly any revisions to any forward-looking statements to reflect events or circumstances after the date hereof or to reflect the occurrence of unanticipated events. Investors should not place undue reliance on forward-looking statements.