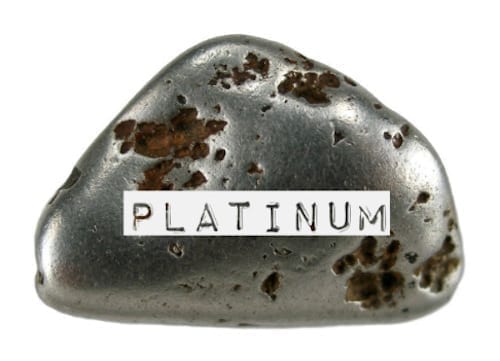 Platinum uses are incredibly varied — the metal can be used in autocatalysts and jewelry, as well as for medical and industrial purposes.

Platinum may be rare, but today it is the third-most-traded precious metal in the world. Platinum uses vary widely across many sectors. Most notably, it’s used in autocatalysts and jewelry, as well as for medical and industrial purposes.

Those interested in investing in platinum would do well to be aware of the many platinum uses. After all, by knowing which industries require platinum, it’s possible to understand supply and demand dynamics, and to be aware of how the metal’s price may move in the future.

With that in mind, we’ve put together a list of the four main platinum uses. Scroll on to learn more about them, or click here to see a breakdown of platinum’s key applications in infographic form.

One of the main platinum uses is in the construction of autocatalysts. An autocatalyst is a “cylinder of circular or elliptical cross section made from ceramic or metal formed into a fine honeycomb and coated with a solution of chemicals and platinum group metals.” When mounted inside a stainless steel canister, autocatalysts are known as catalytic converters.

Catalytic converters are installed in vehicles’ exhaust lines, between the engine and muffler, where they moderate the dangerous qualities of exhaust. Specifically, the autocatalysts that vehicles contain convert over 90 percent of hydrocarbons and carbon monoxide into carbon dioxide, nitrogen and water vapor. They can also convert pollutants from diesel exhaust into carbon dioxide and water vapor, which is immensely helpful in reducing pollution.

Autocatalysts have been used in the US and Japan since 1974, and are now so common that more than 95 percent of new vehicles sold each year have one. As a result, they are a significant source of platinum demand that is not likely to disappear in the future. Indeed, as pollution rules become more stringent, car companies are looking into the possibility of creating even more efficient autocatalysts.

Platinum has many qualities that make it ideal for use in jewelry, and that is second-largest source of platinum demand. For instance, the metal is strong, resists tarnish and can repeatedly be heated and cooled without hardening or oxidizing. When used to make jewelry, it is commonly alloyed with other platinum-group metals, as well as copper and cobalt, so that it is easier to work with.

The history of platinum’s use in jewelry is long. More than 2,000 years ago, indigenous people in South America made rings and ornaments out of the metal. Egyptians used platinum for decoration as early as the 7th century BC. Meanwhile, Europeans began to use the metal in jewelry in the 18th century and continue to do so to this day. Currently, China is the largest market for platinum jewelry.

Platinum’s industrial applications could fill a book all on their own. For instance, platinum catalysts are used to manufacture fertilizer ingredients, and the metal is a key component in silicones, hard disks, electronics, dental restoration, glass-manufacturing equipment and sensors in home safety devices.

Another platinum use is in the construction of hard drives with extremely high storage densities. And, because it is reactive to oxygen, oxides of nitrogen and carbon monoxide, platinum can be used to detect changes in the amount of those materials in vehicles and buildings. For the same reason, platinum is also used in medical sensors, particularly medical instruments that measure blood gases, to detect oxygen.

Platinum is used in electronic medical devices like those mentioned above, as well as in catheters, stents and neuromodulation devices. It is ideal for these applications because of its durability, conductivity and biocompatibility. The metal is also inert within the body, making it safe for implantation.

To meet other medical needs, platinum can be formed into rods, wires, ribbons, sheets and micromachined parts. Further, it helps fight cancer in the drugs cisplatin and carboplatin, which are widely used to treat testicular cancer, as well as ovarian, breast and lung cancer tumors.

What platinum uses interest you most? Will you invest in the metal? Tell us in the comments.

5 responses to “4 Platinum Uses for Investors to Know”