Palladium’s price point has risen nearly 50 percent during 2010, nearly twice that for gold and three times that for platinum, palladium’s chemical cousin. 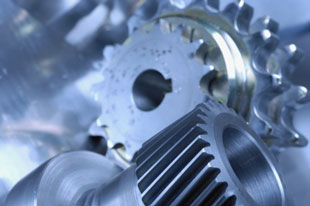 The year of 2010, filled with uncertainty and risk adversity, will go down in the history books as a time when investing in precious metals was catapulted to center stage. While talk show pundits have debated the various methods for owning gold and silver, palladium, the “other white metal,” has quietly gained dominance in the statistic that matters most, price performance over the past year. Palladium’s price point has risen nearly 50 percent during 2010, nearly twice that for gold and three times that for platinum, palladium’s chemical cousin.

Price’s for palladium are reaching their highs for the decade, and these levels would be a record had not the market been distorted back at the turn of the millennium. The following price history chart is worthy of discussion: 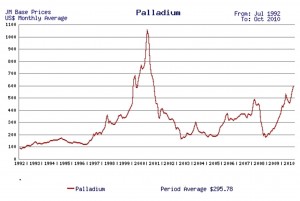 The two largest producers of palladium, Russia and South Africa, account for roughly 45 percent of the market apiece, with Canada and the United States splitting the remaining 10 percent. Approximately half of this production is used in making catalytic converters for the global automobile industry, and Ford Motor Company, fearing a shortage brought on by ongoing political instability, stockpiled the metal at market-panicked prices, as noted by the severe spike in 2000. When tensions subsided, Ford recorded a financial loss of over $1 billion after prices plummeted back to reality.

The recent recession and the related drop in global manufacturing caused the dip in prices in 2008. Palladium may often be substituted for gold, silver and platinum in jewelry settings, but consumer demand is not the primary driver for demand. Uses for the metal may start with catalytic converters, but they also wind their way through electronics, dentistry, medicine, hydrogen purification, chemical applications and groundwater treatment.

As environmental concerns continue to dictate stiffer emission controls for autos and trucks and consumers continue to be fascinated with the latest electronic gadget, whether it be a computer, mobile phone or television, palladium prices will rise to meet growing manufacturing demands. Newer technology in the energy production market has also begun to focus on the fuel cell industry where hydrogen and oxygen are combined to form electricity. Palladium actually performs a key role in this conversion process. Intrinsic value, derived from its many complex industrial uses, heavily influences this metal’s pricing dynamics.

With both old and new technology contributing to demand for palladium, a growing concern for industrial users is the obvious investment potential of the metal for global investors. Mutual funds, ETFs and bullion safekeeping firms are avenues for retail investors to benefit from the metal’s recent price run up, but the “hoarding effect” of these entities may drive the price even higher than is market justified. A weakening Dollar in the forex market may also cause appreciation and speculation based on forex news alone.

Speculation will always follow situations such as these, leaving someone holding the proverbial “bag” at some point. However, the global recovery of the manufacturing sector will benefit palladium prices in the long run.

Presented by Forex Trading. Check them out for forex news.