Grid Metals Corp. (TSXV:GRDM) is pleased to provide an update on the ongoing 2020 diamond drilling program at its 100% owned East Bull Lake palladium property in Ontario.

Grid Metals Corp. (the “Company“) (TSXV:GRDM) is pleased to provide an update on the ongoing 2020 diamond drilling program at its 100% owned East Bull Lake (“EBL”) palladium property (the “Property”) in Ontario. The Company plans to test the main structural zone on the property at several locations along its 12 km extent. In the first phase of drilling anomalous palladium grades were intersected in both of the targets tested at the Parisien Lake target area. The East Bull Lake Property covers approximately 85% of the palladium-bearing East Bull Lake Intrusion, located approximately 80 km west of Sudbury, Ontario.

Proposed hole locations for the fall drilling program are shown in Figure 1. 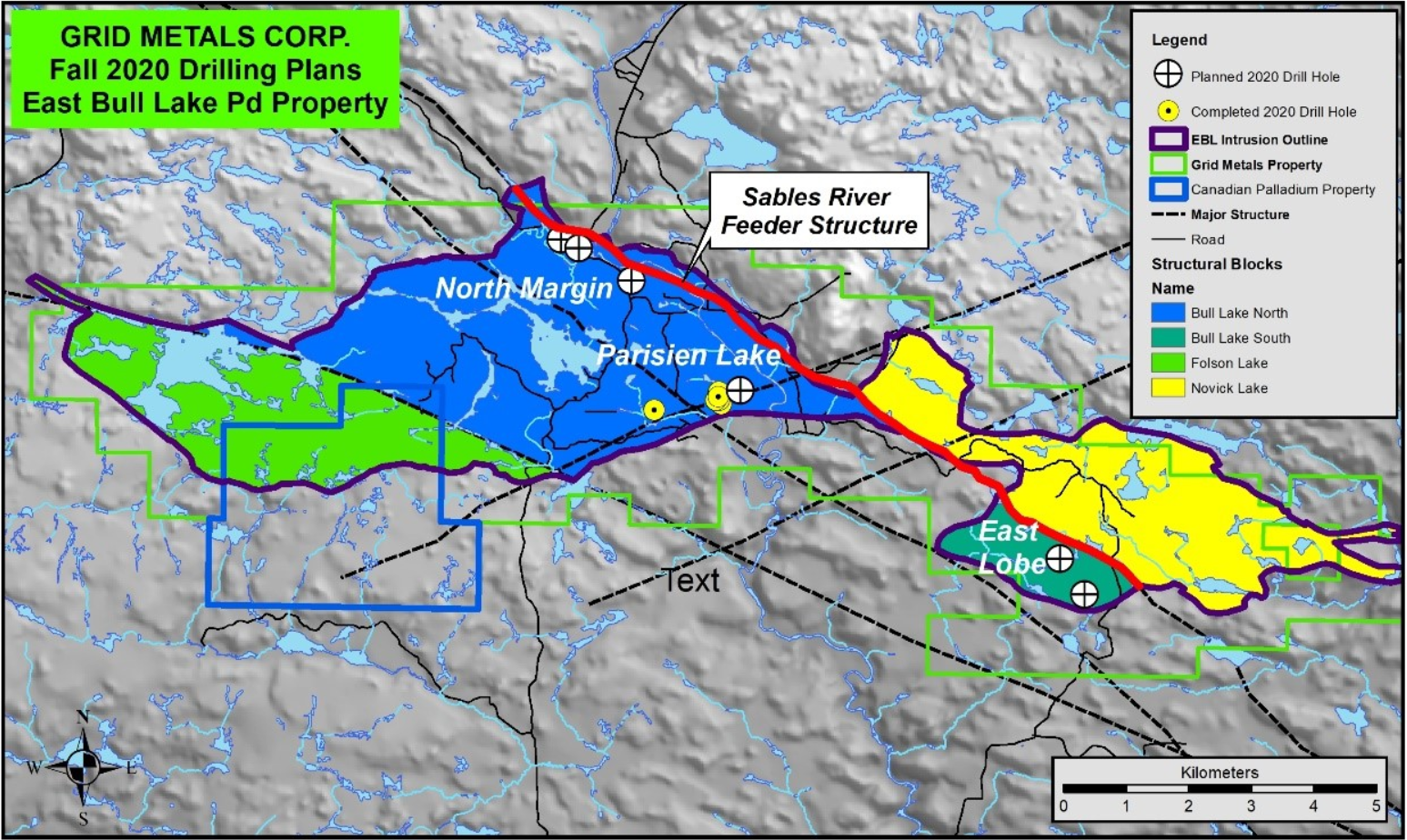 The technical program of the Company is being overseen by Dr. Dave Peck, P. Geo., who is a leading global explorer for platinum group metals and nickel. He commented “We have planned the next phase of drilling to further vector towards areas of higher grade palladium mineralization at the Property. We will continue to test near surface geophysical anomalies that we believe to represent areas of enhanced sulfide content and Pd grade. We are specifically focusing on anomalies associated with an interpreted, 12 km long primary feeder structure – looking for zones of enhanced Pd grade and thickness within or directly adjacent to this structure.”

Holes EBL20-06 and EBL20-07 were drilled to follow up on encouraging results observed in hole EBL20-05 as reported on in the Company’s August 6th, 2020 news release. These holes targeted the western edge of an extensive, near surface resistivity anomaly identified from the spring 2020 magnetotelluric (MT) survey on the property. Selected analytical results are tabulated below.

Plans for the Fall 2020 Drilling Program

The first hole to be drilled in the fall campaign will test a stronger part of the near surface MT anomaly intersected in holes EBL20-04 to 07. The new hole will be collared several hundred metres to the east of hole EBL20-05 (Figure 1) in closer proximity to the interpreted main feeder to the intrusion – the Sables River structure.

The Company also plans three holes in the North Margin area, an area of the East Bull Lake property with only one previous drill hole, EB12-05 (Figure 1). This hole is located 500 metres to the southeast of the southernmost of the planned holes. It intersected 5.50 metres averaging 1.91 g/t Pd and 0.44 g/t Pt including a 2.0 metre sub-interval with 4.26 g/t Pd and 0.89 g/t Pt. The three planned drill holes will be widely spaced and will cover an approximately 1.3 km long section of the near surface (i.e., 50-200m depth) MT anomaly that adjoins the Sables River structure in this area.

The Company currently has two drill holes planned for the East Lobe South Margin target area (Figure 1). The area has been the subject of extensive surface sampling that has defined two sub-parallel, east-striking zones of palladium mineralization (Central and South zones) located immediately west of the Sables River structure. Ongoing field investigations are focused on validating historical sampling and ground truthing several MT anomalies in the area. The holes will test both near surface Mt anomalies and significant, historical surface sampling results.

Grid Metals applies best practice quality assurance and quality control (“QAQC”) protocols on all of its exploration programs. For the current drilling program, core is logged and sampled at a core facility located in the town of Massey, Ontario – approximately 30 km south of the property. NQ-size drill core samples are cut into halves using a diamond saw. Standard sample intervals of 1.00 metre length are used unless a major geological, structural or mineralization boundary is encountered. Samples are bagged and tagged and driven by Company consultants to ALS Laboratories’ sample preparation and analytical laboratory in Sudbury, Ontario. ALS analyzes each sample for Pd, Pt and Au using a lead collection fire assay on a 30 g pulp split and an ICP finish. Copper, Ni and Co are analyzed by ALS using a multi-acid digestion and an ICP finish. The Company uses two PGE certified reference materials (“CRMs”) and one analytical blank purchased from Canadian Resource Laboratories to monitor analytical accuracy and check for cross contamination between samples. One of the CRMs or the blank are inserted every tenth sample within a given batch. The analytical results for the two CRMs and the blank for the sample batches reported here did not show any significant bias compared to the certified values and the results fell within the acceptable limits of variability.

Grid Metals Corp. is an exploration and development Company that has a diversified portfolio of projects in the nickel-copper-platinum group metal sectors. These commodities are vital to the emerging battery metals, energy storage and automotive sectors. All of Grid’s projects are located in secure North American mining jurisdictions. The Company is focused on timely advancement of its property portfolio through prudent exploration and development activities.