VVC Exploration Corporation (TSXV:VVC) (“VVC” or the “Company”) is pleased to provide a summary of final results from the 2017/2018 diamond drilling program at Company’s Samalayuca Copper project in Northern Chihuahua state, Mexico (the “Property”).

VVC Exploration Corporation (TSXV:VVC) (“VVC” or the “Company”) is pleased to provide a summary of final results from the 2017/2018 diamond drilling program at Company’s Samalayuca Copper project in Northern Chihuahua state, Mexico (the “Property”).   The drilling program was conducted in three phases, beginning in August 2017 and ending in November 2018. Sixty-two (62) drill holes (DDH’s) totalling 6700 meters tested a 5-kilometer long mineralized zone covering approximately two thirds of the length of the property.  A total of 2,990 core samples were taken.   Fifty-seven (57) of the 62 holes had sections with copper grades greater than 0.1% copper, with some sections as high as 0.95%, and estimated true mineralization widths up to 36 meters, as detailed in News Releases on Jan. 17, 2019, and Oct. 11, Aug. 17, Aug. 2 and Feb. 8, 2018, including accompanying maps and sections (Oct. 11 and Aug. 17, 2018) which are filed on SEDAR.  A plan map of the drilling is shown on Map 1 (attached and filed on SEDAR) with drilling highlights summarized on Tables 1 and 2.

The drilling gave encouraging data on two fronts. First, from the three areas with the most intensive drilling, the Gloria, Gloria Extension, and Gloria Extension East (Table 1) where the extensive copper mineralization was defined by the drilling, the data indicates that the Company should continue planning towards a proposed pilot mining program (see “Pilot Mine Planning” below). Second, the results from the 5 other areas drilled (Table 2) also show good copper values with less detailed drilling and will require more detailed exploration. 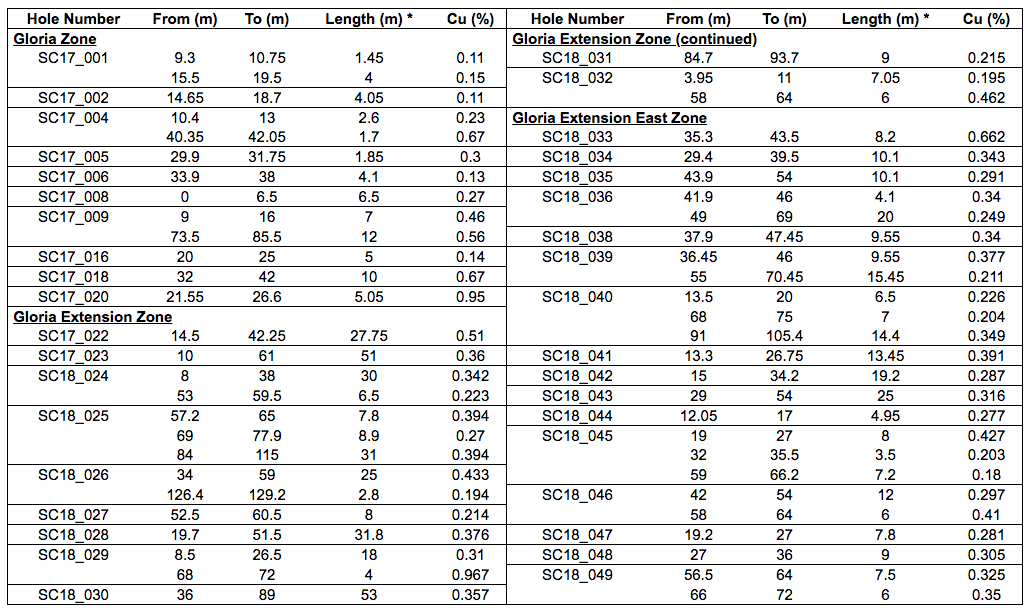 Chairman Terrence Martell commented, “We have always believed that the Samalayuca Copper Property had tremendous potential.  Our belief was based on the sheer size of the vast property and the quantity of green oxidized copper mineralization on the surface.  The data and understanding of the Property that we have gleaned from this two-year drilling / exploration program has justified our belief in the tremendous potential inherent in this project.”

Geology
The Samalayuca property covers copper mineralization in the Samalayuca Sierra, characterized as a Stratiform Copper Deposit type, by qualified persons, Michel Gauthier and Jocelyn Pelletier (2012), and Jacques Marchand and Michel Boily (2013).  Fine disseminated chalcopyrite-bornite and associated oxide copper minerals, common to these deposits, are noted in a wide chloritized zone along the Sierra with mineralized zones from 3 to 36 m wide, true thickness, as defined in the artisanal surface pits.  The stratigraphy strikes NW and dips gently, approximately 25 degrees NE, although it is variable.  Vertical faults can also generate supergene copper enrichment when they cut the mineralized strata.  The old pits dug by the artisanal miners (gambusinos) targeted higher grade, surface, copper zones, exploiting them by shallow (< 20 m deep) open pits and hand cobbing the ore for direct shipping to a smelter.

It should be noted that there has been no feasibility or prefeasibility study or preliminary economic analysis, relating to production, carried out on the Samalayuca project and no NI 43-101 compliant reserves have yet been defined and, as such, the project has not been shown to be economic.  Inferred Mineral Resources of 4,100,281 T at 0.47 % Cu and 5.8 g/t Ag, were defined in a report dated April 20, 2013 by Dr. Michel Boily (PhD. P.Geo.), an independent qualified person (QP) under NI 43-101, which was filed on SEDAR on October 7, 2013.   One of the partners in the Project, Firex S.A. de C.V. has committed to proceed to production without the requirement of the above noted studies, once all permits are in place. Note that a decision to proceed to a pilot mining program, if taken, does not constitute a decision to proceed to commercial production.

Further Exploration
Drilling at the Concha, Suerte, El Paso, Gloria NW, Thor, and Juliana zones showed good copper values however, the drilling was limited and further exploration is required to define these mineralized zones (Map 1).  Table 2 shows significant values for Cu > 0.1% for these zones.  Future exploration will also target three zones, previously mined by artisanal miners, not yet drilled by VVC, including Zorra, Trinidad and San Nicolas (Map 1).  Surface samples from the Zorra zone showed the highest copper values from the Samalayuca property.  The Company has received regulatory approval for drilling and exploration of these three untested areas.

Analysis and QA/QC
Core samples results were received from the ALS Chemex laboratory in Chihuahua city, MX following analysis by their ICP61 technique.  For more details on the analytical procedures, refer to the previous news release filed on SEDAR.

This news release has been reviewed for accuracy and compliance under National Instrument (NI) 43-101 by Peter M. Dimmell, BSc. P.Geo. (NL, ON), a VVC Director and Qualified Person as defined by NI 43−101, Standards of Disclosure for Mineral Projects.  He has approved the scientific and technical disclosure in the news release.

About VVC Exploration Corporation
VVC is a Canadian exploration and mining company focused on the exploration and development of copper and gold deposits in Northern Mexico, specifically the Samalayuca copper property in Chihuahua State.  VVC has other projects in Mexico and Canada, including gold and silver prospects, Cumeral and La Tuna, in Sonora and Sinaloa States, Mexico and a grassroots gold/VMS prospect in the Timmins area of northern Ontario.

This news release contains “forward-looking information” (within the meaning of applicable Canadian securities laws) and “forward -looking statements” (within the meaning of the U.S. Private Securities Litigation Reform Act of 1995).  Such statements or information are identified with words such as “anticipate”, “believe”, “expect”, “plan”, “intend”, “potential”, “estimate”, “propose”, “project”, “outlook”, “foresee” or similar words suggesting future outcomes or statements regarding an outlook.  Such statements include, among others: planning towards a proposed pilot mining program, will require more detailed exploration, believe that the Samalayuca Property has tremendous potential, believes that these zones are all excellent candidates for a proposed pilot mining program, proceed to production without the requirement of the above noted studies, further exploration is required to define the mineralized zones.

Such forward-looking information or statements are based on a number of risks, uncertainties and assumptions which may cause actual results or other expectations to differ materially from those anticipated and which may prove to be incorrect. Assumptions have been made regarding, among other things, management’s expectations regarding exploration results, the Drilling Programs, financing efforts, future development and growth, plans for and completion of projects by Company’s third party relationships, availability of capital, and the necessity to incur capital and other expenditures. Actual results could differ materially due to a number of factors, , without limitation, operational risks in the completion of Company’s anticipated projects, delays or changes in plans with respect to the development of Company’s anticipated projects by Company’s third party relationships, risks affecting the ability to develop projects, risks inherent in operating in foreign jurisdictions, the ability to attract key personnel, and the inability to raise additional capital. No assurances can be given that the efforts by Company will be successful.  Additional assumptions and risks are set out in detail in the Company’s MD&A, available on SEDAR at www.sedar.com.

Investors are cautioned that notwithstanding the expectations described herein, there can be no assurance that the plans described herein will be completed as proposed.  Trading in the securities of VVC should be considered highly speculative.  All forward-looking statements contained in this press release are expressly qualified in their entirety by this cautionary statement.