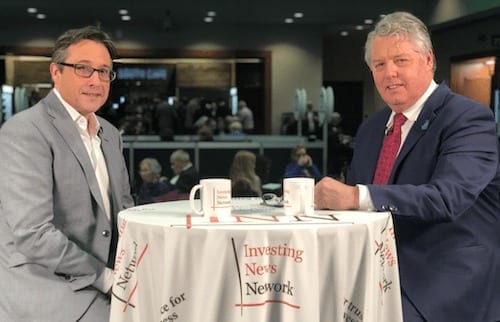 Nexus Gold (TSXV:NXS,OTCQB:NXXGF,FWB:N6E) CEO Alex Klenman believes that West Africa is a misunderstood mining jurisdiction that offers a wealth of opportunities for investors.

In the interview below, Klenman dispels preconceived notions about Burkina Faso as a mining jurisdiction and discusses the implications of developing a compliant resource for Bouboulou. The Nexus Gold Bouboulou concession is located on the Boromo-Goren Greenstone Belt with multi-million-ounce deposits on all sides, making it an optimal target for development. According to Klenman, mining in West Africa is “an acquired taste,” which has caused skepticism surrounding Bouboulou and other projects in Burkina Faso. Despite these concerns, Klenman feels that his company’s Bouboulou project offers significant mineralization with the necessary infrastructure to develop the property.

Nexus Gold recently acquired one of Canada’s most prolific mining operations, the Bralorne gold camp located in British Columbia, Canada. According to Klenman, the property’s long history of production made Bralorne an optimal spot for Nexus’ next project. The company intends to spend the summer exploring its Canadian properties, mapping and sampling to determine drill targets at both Bralorne and its Red Lake project in Northern Ontario.

Below is a transcript of our interview with Nexus Gold CEO Alex Klenman. It has been edited for clarity and brevity.

Investing News Network: Please give our investor audience an overview of Nexus Gold’s assets in North America and Africa.

Nexus Gold CEO Alex Klenman: We’ve been in West Africa for years. We’ve found that many North American investors lack the confidence and knowledge to invest there, and we’ve expanded into Canada in the past six months to open up our audience.

INN: Where are your Canadian properties located?

AK: We have one near Bralorne in Central British Columbia. There’s a long history of production in the area. The second property is in the Red Lake district in Northern Ontario. We’re really excited about this project as it has some great historical numbers.

INN: Tell us about your Burkina Faso assets.

AK: We have four projects that cover 550 square kilometers on well-known greenstone belts. There is production and multi-million-ounce deposits all around us. One of the projects is moving towards a resource assessment, which we hope to release in 2019.

INN: Is your focus on this advanced-stage project?

AK: Correct. It’s our quickest path to a higher valuation. We’re also an exploration company and we like to develop and make discoveries on grassroots projects.

INN: Why is Burkina Faso an attractive option for investors?

AK: Investing in West Africa can be an acquired taste — some people like it, others don’t. The upside to West Africa is that you can get large, cheap land packages that haven’t been pin cushioned by another company. It gives us the opportunity to make discoveries and delineate a large deposit, which you don’t often get in well-known jurisdictions. We’re happy where we are.

INN: What’s unique about the resources in Burkina Faso?

AK: West Africa’s mineralization is amenable to low-grade bulk tonnage operations. These deposits are near the surface, average up to 2 g/t, are economically viable, easy to get to and open-pittable. All the infrastructure you need is in West Africa. There are mills, drill contractors, everything.

INN: Where are you at in the process of cozying up to the majors?

AK: We’re in the right area. We’re on the Boromo and Goran greenstone belts and have multi-million-ounce deposits on all sides. It’s just a matter of time before we bring something large to the market and capture the interest of the majors.

INN: How do you get to that point?

AK: We have to establish a sizeable compliant resource, and we’re working on that. We’re currently working on the Bouboulou concession. We’ve drilled about 60 holes and are halfway to a resource. The more we drill, the bigger the deposit will probably be, and we’re focused on that right now.

INN: What’s Burkina Faso like as a mining jurisdiction?

AK: Burkina Faso has paved roads, water, power, everything we need. Most importantly, there are mills and producing mines. We’re not out in the boonies; we’re in the heart of the district.

INN: Is there anyone from your management team whom you’d like to highlight?

AK: We have some experienced members on the team who bring a lot of value to Nexus. Our Vice President Exploration and Director Warren Robb has worked in Burkina Faso off and on for 10 years. He was the chief geologist for Roxgold (TSX:ROXG) when they made the Yaramoko discovery, which is now one of the highest-grade mines in the world. Robb and his team know Burkina Faso well. Our director Ian Stalker has a long history in the industry and also knows West Africa well.

INN: What are the next steps for your North American assets?

AK: We’re going to spend the summer at both properties. We’ll be doing some mapping and sampling to determine drill targets. We’ll also be completing geophysical work to limit our misses. You need to collect data before you drill so that you can mitigate potential downsides. We want to put the first holes in the ground on our Canadian properties, but we’re going to do it methodically.

INN: Why is now a good time to invest in Nexus Gold?

The information contained here is for information purposes only and is not to be construed as an offer or solicitation for the sale or purchase of securities. Readers should conduct their own research for all information publicly available concerning the company. Prior to making any investment decision, it is recommended that readers consult directly with Nexus Gold and seek advice from a qualified investment advisor.