Prime Meridian Resources announces that the Company has executed a purchase agreement to acquire new mineral claims in the western Pakwash Lake area.

Prime Meridian Resources Corp. (“PMR” or the “Company”) (TSXV:PMR) announces that the Company has executed a purchase agreement (“Agreement”) to acquire three new mineral claims in the western Pakwash Lake area of the Red Lake Mining District of Ontario. The New claims (556590, 556591, 556592) are due south of the TNT target of BTU Metals (BTU.TSXV) and are contiguous to claims already optioned by the Company and previously announced in a News Release on September 5, 2019 to the East and South of the BTU Metals Dixie Halo Project. 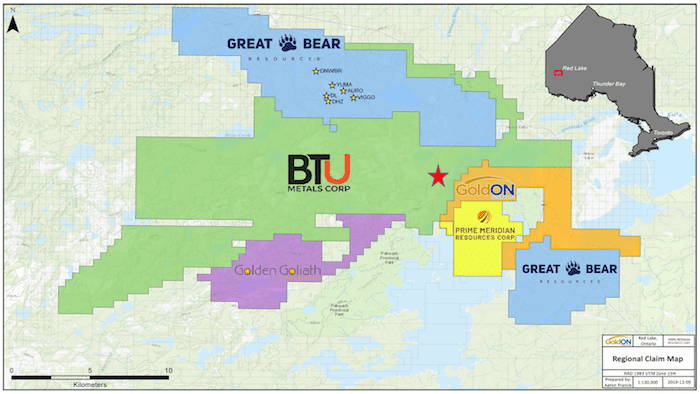 Drilling is ongoing to further explore the TNT target to the east and south of the location of hole 13, the polymetallic discovery hole. The Company has begun undertaking work planned to define the full scope of the TNT chargeability target and understands the footprint of the target to be at least 1000 metres northsouth and between 200 and 500 metres east-west as defined by IP chargeability and resistivity survey data. The target remains open both to the north and to the south. Holes 19 and 20 were drilled to the East of hole 13 while recently completed holes 21 and 22 were drilled approximately 800 metres to the south of where 13,19 and 20 were drilled. Mineralization intersected in the holes completed to date is comprised of strong disseminated pyrite with scattered disseminated to occasional stringer chalcopyrite. 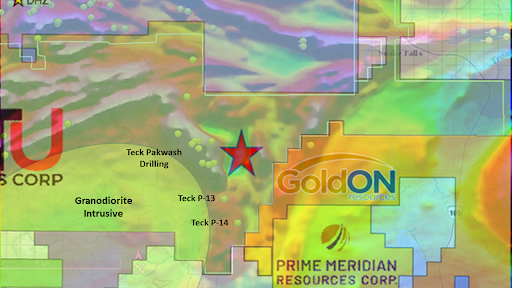 The Company has acquired a 100% interest in the three new claims for a one-time payment of $15,000, subject to a 1% royalty in favour of the vendor that can be purchased by the Company for $500,000. The transaction and formal agreement are subject to acceptance by the TSX Venture Exchange.

Subject to approval from the TSX-V, the company has previously announced a non-brokered private placement financing of up to 10 million units at a price of 10 cents per unit to raise proceeds of up to $1 million. Each unit consists of one common share and one common share purchase warrant, with each warrant entitling the holder to acquire one additional common share at a price of 30 cents per share for 12 months from closing. The warrants will be subject to the right of the company to accelerate the exercise of the warrants if the shares of the company trade at or above 50 cents for a period of 10 consecutive trading days. Fees may apply to the private placement and all securities issued will be subject to a fourmonth hold period.

On behalf of the Board of Directors of Prime Meridian Resources Corp.

The TSX Venture Exchange has in no way passed upon the merits of the proposed transaction and has neither approved or disapproved the contents of this press release.

Click here to connect with Prime Meridian Resources (TSXV:PMR) for an Investor Presentation.