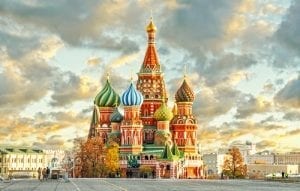 Surrounded by 12 seas and bordering 16 countries, investors should know Russia has an improving investment climate and an abundance of natural resources.

As the largest country by landmass on Earth, Russia boasts a massive reserve of natural resources, placing it in the top three for most of the world’s most valuable commodities. The country ranks number one in reserves for gas, tin, zinc, titanium, niobium, nickel, iron ore, diamonds and silver. Russia also hosts substantial coal, gold, platinum and copper resources.
Today, Russia is one of the world’s leading metals and minerals producers. Mining is Russia’s second-largest industry after oil and gas, and represents about 5 percent of the country’s GDP and 16 percent of its exports. Surrounded by 12 seas and bordering 16 countries, Russia is a hotbed for international trade.
In spite of the prominence of resource mining in Russia’s economy, most mining operations cover a small percentage of the nation’s vast landscape, leaving much of the country underexplored and ripe for discovery opportunities. In fact, Russia is considered to have some of the most virgin exploration territory in the world — especially in the Far East region.
However, Russia’s reputation for being a nation controlled by oligarchs, along with its history of political and economic turmoil, have caused many foreign investors to avoid what some see as a shaky investment climate with too many risks. Yet those with experience in the region say Russia is undergoing an economic and regulatory transformation brought about by a government that recognizes the critical importance that foreign investment has in the country’s long-term economic growth and stability — presenting new opportunities for foreign investment.

The 2014 financial crisis in Russia — brought on by declining oil prices and economic sanctions following the annexation of Crimea and military intervention in Ukraine — has impeded Russian President Vladimir Putin’s ambitions for the country’s economic prowess on the world stage. The situation has significantly affected the investment climate, encouraging Russia’s government “to search for and implement new ways to achieve economic development,” according to a report by advisory firm KPMG.
Economic growth in Russia would require about US$75 billion annually, and Russia’s minister of the economy, Maxim Oreshkin says his government is working to reach that level by attracting more foreign investment, reports InvestorIntel.
Over the past few years, Russia has “continue[d] to make improvements in its investment environment, as shown in its steady increase in the World Bank’s Doing Business survey. In 2015, for the first time, Russia received the overall best ranking among the BRIC countries,” Randi B. Levinas, executive vice president and chief operating officer of the US-Russia Business Council, told the Wharton School of Economics online business analysis journal.
Patricia Dowden, president and CEO of the Center for Business Ethics and Corporate Governance, notes that in EY’s Global Fraud Survey (2016) Russia ranked 31 out of 57 countries — ahead of the US, which ranked 32 — in response to a survey question regarding bribery and corrupt practices. “In my experience, the progress [in Russia] has been remarkable,” said Dowden. “Multinationals have had a big influence on developing an impressive contingent of Russian compliance professionals, and Russian-owned businesses, including state-owned companies, have also shown great interest in addressing corruption. The Russian government has also officially supported aggressive prosecution of corruption.”
Another EY survey, “Investment Climate in Russia — Foreign Investor Perception,” states that over 50 percent of respondents with business operations in the country believe “regional authorities are directing more efforts to improving the investment climate as compared with a few years ago, and that they are demonstrating a solid commitment to create attractive business conditions for foreign investors.” In addition, 50 percent of respondents “plan to expand their business in Russia as they are optimistic about the future growth prospects for their industry.”

Russia’s oil and gas industry is mostly state owned, but the nation’s mining industry is largely privately owned. Since 2014, Moscow has also been working to improve mining policies and tax incentives aimed at attracting foreign companies, including Canadian miners.
A prime example of a western company successfully operating in Russia is major miner Kinross Gold (TSX:K,NYSE:KGC), which has been in the country since 1995 and holds as many as 14 mining sites from which it generates nearly a third of its total worldwide gold production.
“Russia’s economy is largely based on natural resource extraction, and exports of those commodities represent a significant source of revenue. The industry is viewed as the best mechanism to develop some of the less developed parts of Russia, for example in the Far East,” explains Dusty Nicol, president and CEO of Azarga Metals (TSXV:AZR). Azarga Metals is advancing toward a preliminary economic assessment at the large, high-grade Unkur copper-silver deposit in Russia’s Far East province of Zabaikalsky. The province, known for its large copper deposits, shares a border with China and Mongolia.
Nicol, whose over 40-year career includes managing exploration and mining projects across the globe, says Russia compares favorably with many other jurisdictions in terms of infrastructure, government support, tax incentives and ease of permitting. “Not only are there supportive regulations in place, but there are supportive fiscal incentives for the development of mining and operations. The environmental permitting process is straightforward and therefore there’s not a great deal of permitting risk in Russia,” he says. There are also no restrictions on foreign ownership of base and precious metals deposits.
Compared to much of Europe, “if you were to simply read the regulations in black and white, you’d have difficulty distinguishing the Russian regulations from European regulations,” says Nicol. “The intangible difference is the overall attitude in Russia is one of cooperation in the development of natural resources, where I can tell you having spent the last five years of my career working in Central Europe, it’s quite a different environment there.”

Russia’s Far East region covers an immense area of land in the northeastern portion of the country that stretches from Lake Baikal in Eastern Siberia to the Pacific Ocean and shares borders with China and North Korea to the southwest. Through the Far East, Russia has direct access to Asia-Pacific markets.
The Far East region holds a large share of the country’s resource base, including oil and gas, iron ore, diamonds, copper and about half of its gold and silver reserves. Legislation in 2015 recognized the Far East as a “Territory of Priority Development,” and laid out plans to encourage economic growth and improve the investment climate in designated “Special Economic Zones” in the region.
Russia’s Far East Development Fund is a cornerstone of the government’s push to facilitate investment in the development of its natural resources. That investment includes resource exploration and the infrastructure — i.e. transportation and utilities — necessary for developing mining projects.
In September 2017, China announced it would be contributing $15 billion to fund joint projects in the region targeting various industries, including manufacturing, resources exploitation and infrastructure. China is the second-largest export destination for Russia’s Far Eastern Federal District.
Russia’ Far East has many of the attributes that make a region attractive to resource exploration companies, including underdeveloped mineral resources, key infrastructure, a favorable climate for field work and government-backed fiscal incentives. Under the Far East Development Fund, the government is offering direct financial help to qualified projects during the construction stage, as well as tax and royalty relief during the operation’s payback period.
“This is not unique to Russia, there are other countries that have that type of program, but it’s a very well-established program that encourages exploration by lowering the hurdle for an economic project, that’s the direct tangible effect,” says Nicol. “Anyone who has tried to build a mine knows such programs are reflective of a positive attitude; government support of mine development makes a project that much more viable.” Azarga won the rights to the Unkur concession through a government-run auction.
Other resource companies in the Far East region include Ireland-based Ovoca Gold (LSE:OVG,FWB:OVXA), which holds two gold projects in Magadan province; and Silver Bear Resources (TSX:SBR), which is advancing toward production at the high-grade Mangazeisky silver project north of Yahutsk in the Republic of Sakha.
As for the cold climate, Nicol compares it to working in Alaska or the Yukon. Year-round drilling and exploration work is feasible even in Russia’s Far East with the abundance of ice roads. Other infrastructure includes the well-established railway system. Russia is home to the world’s longest railway, the Trans-Siberian, which crosses eight time zones as it passes through 87 cities. Altogether, the nation’s railways cover 86,000 kilometers.
Perhaps the Far East’s most attractive feature for exploration companies is the blue sky potential for a great discovery in a region with exceptional geology, harkening back to Ivanhoe Mines (TSX:IVN) founder Robert Friedland’s discovery of what would become the $6-billion Oyu Tolgoi copper mine in the emerging mining jurisdiction of Mongolia.
“Russia is very vast, and it’s underexplored. To give you an example, when I started working in copper exploration 42 years ago, one of my mentors told me that I should get used to the fact that anything I would find in my career would be blind, meaning it wouldn’t outcrop because all of the outcrop in copper deposits had been discovered,” says Nicol. “On our property in Russia, walking in the creek I hit with my hammer an outcrop running 3-percent copper that didn’t appear on any maps. Russia is geologically very fertile, it’s underexplored and I think there’s opportunity there for world-class mineral discoveries.”

The consensus on Russia seems to be that those who stand to benefit the most from future growth in the economy are those with a more long-term view. “I’m very much an advocate of the longer-term view on Russia,” says Nicol. “I think it’s an issue of perception. The geologic opportunities and discovery potential aren’t going anywhere. And I think that the fundamentals for working in Russia are very sound. Although the geopolitical issues are nothing to make light of, I think their effect on investment will be transitory.”
Russia “has proven a profitable market for many companies over time, and that has been based on strategies that approach Russia as a long-term play, where a company works hard at building relationships of trust in the market; where senior levels of the firm give Russia their attention and time, and where the firm has an appetite to manage uncertainty. Some firms are more comfortable and prepared to do this than others,” said the US-Russia Business Council’s Levinas.
This article was written according to INN editorial standards to educate investors.