Concern that Chinese and Indonesian tin smelters will reduce output has sent tin prices on a rollercoaster ride in recent weeks.

Concern that Chinese and Indonesian tin smelters will reduce output has sent tin prices on a rollercoaster ride in recent weeks. Currently the price of the metal is US$17,330 per tonne.

While a US$400 uptick from one day to the next is significant, tin hit a four week high on Monday (September 2) when it skyrocketed by US$1,380 over 48 hours.

Despite the recent positive price movement, the value of tin has otherwise slipped consistently since hitting a year-to-date high in late February of US$21,900. 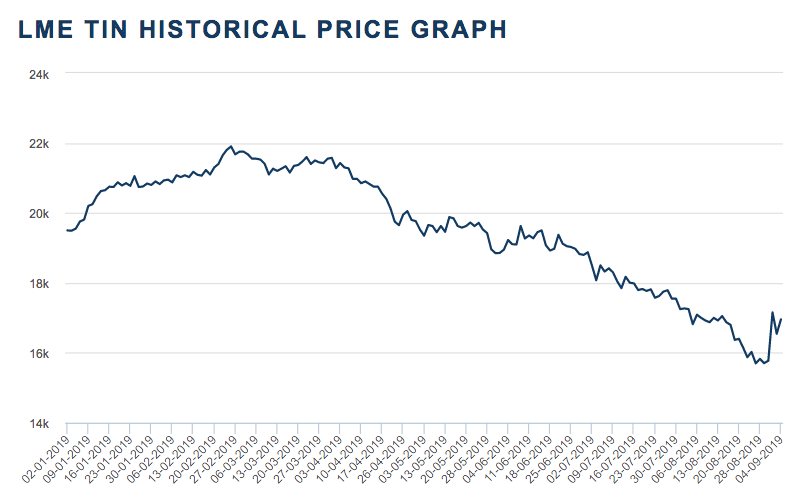 According to reports, the three day event culminated in major Chinese smelters committing to cutting production by a combined 20,200 metric tons (MT). Indonesia’s PT Timah (IDX:TINS), the country’s largest tin smelter and the world’s second largest, also agreed to slash its output by over 10,000 MT.

The share price of PT Timah shot up by as much as 17.43 percent following word of the cuts, and has since slid down slightly.

Prior to the announcement, the yearly output target for the Indonesian smelter was 60,000 to 70,000 MT. Although the company has yet to commit to a definitive reduction number, it is safe to say production for 2019 will be below that target range.

Demand for tin has slowed in China in correlation with the national economy and ongoing tensions brought on by the unending trade war between China and the US. Add to that a reduction in the amount of tin ore available for smelting, and the reasoning behind the output cuts begins to appear clearly.

A brief report from Metal Bulletin on Wednesday also notes that tin prices are adjusting as a result of easing stress over Hong Kong. However, market watchers are cautious, concerned that the trade dispute between Beijing and Washington will continue.