After a positive 2016, tin prices performed with volatility in 2017. But what is the tin outlook for 2018? Read on to learn what analysts had to say.

Tin was the best-performing LME metal in 2016, but prices performed in a choppy fashion in 2017.
Most metals rallied in the second half of the year, and although tin reached high levels it could not sustain the $20,000-per-tonne-mark for too long.
Supply worries as China implemented stricter environmental regulations supported prices, but gains were limited by an increase in warehouse stocks.
As the year comes to a close, the Investing News Network is looking back at the main trends in the tin space in 2017, and what’s ahead for prices in the new year. Read on to learn what analysts and market participants had to say about the tin outlook for 2018.

As of mid-December, tin prices were down more than 8 percent year-to-date. However, as the LME chart below shows, tin started the year off well, changing hands for $21,290 per tonne in January. 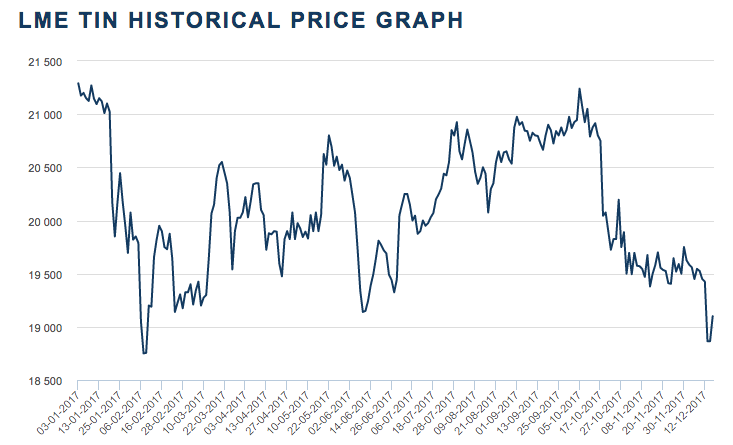 Tin prices from January 2017 to December 2017. Chart via the London Metal Exchange.
The metal’s lowest point of the year came in February, when it was trading at $18,755.
“Tin prices were shut out of the base metals rally and were broadly stable throughout 2017, although we saw a slight downward trend,” said Ricard Torné, FocusEconomics‘ head of economic research.
Warren Hallam, CEO of Metals X (ASX:MLX), Australia’s largest tin producer, said that after the metal’s positive performance in 2016, he expected a further but smaller rise in 2017. He noted that “the fundamentals still remain very strong,” with less than two weeks of supply available in SHFE and LME warehouses and no new mines on the radar.
“[Tin prices stalled this year,] although the market remains finely balanced and still without any additional supply available. [There is also] very strong semiconductor and battery market demand,” he added.
In terms of supply, mine production picked up this year compared to where it was last year. As a result, refined tin output grew from 340,000 tonnes in 2016 to 360,000 tonnes of refined tin 2017, said Tom Mulqueen, an analyst at tin industry group ITRI.
“In 2017, we saw a recovery in refined tin supply due to the average tin price being much higher than last year,” he said. The price increase has also incentivized production from Indonesia, Africa and China.
According to Torné, one of the surprises in the tin market was the removal of a 10-percent export duty in China at the start of the year. “[That] led to most developments in the tin market, as Chinese companies started to flood the international markets,” he added, saying that this put pressure on prices.
Similarly, Mulqueen referred to the removal of the export duty from China, along with Yunnan Tin’s (SZSE:000960) approval for so-called “processing trade,” as the biggest news in the tin market in 2017. “Neither of these announcements have impacted the market fundamentals, but there was a big reaction in terms of prices,” he said.
Looking at demand, tin received support from electronics sector resilience as well as China’s environmental crackdown, which pushed prices higher in the second half, Torné explained.
For his part, Mulqueen said consumption has continued to grow, but at a slower pace than last year. “The market has moved back into balance this year, which is a reflection of prices not changing that much compared to the increase seen in 2016,” he added.

Looking ahead to 2018, robust demand along with a shortfall in supply are set to continue.
Torné said China will continue to dominate headlines in the tin market, as stricter environmental regulations could reduce tin output. Moreover, he sees the tin market remaining in deficit next year.
“Despite the shortfall, prices will increase marginally, as tin has been suffering from a chronic deficit, which has already been pencilled in by the market,” he added.
Similarly, Hallam of Metals X is expecting a larger tin deficit, and thinks that will be reflected in prices. “We would expect a more modest rise in tin prices as the market remains in deficit,” he added.
Meanwhile, Mulqueen said supply from China will remain very static in 2018, and any decline in the refined tin market will likely come from Indonesia. “Next year the market might tighten up a bit again, as Indonesia’s production is expected to drop off,” he said.
In terms of demand, ITRI is expecting consumption to remain quite robust next year. “Overall, we forecast demand will grow 1 to 2 percent, and the market will end with a 5,000- to 10,000-tonne deficit,” he added.

Although tin prices performed with some volatility in 2017, they remained at relatively the same level throughout the year. But what is in store for tin prices in 2018?
Mulqueen doesn’t expect to see any huge price increases during the first half of the year. “I would be wary of anticipating any big price increase due to the potential increase of Chinese exports, but in the second half … reduced supply in Indonesia could impact prices higher,” he added.
Meanwhile, firms polled by FocusEconomics estimate that the average tin price for 2018 will be $20,418. The most bullish forecast for the year comes from Standard Chartered (LSE:STAN), which is calling for a price of $22,500; meanwhile, Euromonitor is the most bearish with a forecast of $18,115.
Torné said factors to watch next year include Shanghai warehouse stocks, which remain relatively high, and Indonesia, the world’s largest exporter, as it continues to boost global supply.

For his part, Mulqueen said responsible sourcing is a key trend in the market that is becoming a crucial issue in terms of import regulations. “There’s more focus in sustainability and responsibility, which impacts both producers and downstream companies,” he said.
Looking ahead, Metals X’s Hallam shared that the company is looking to expand its 50-percent-owned Renison tin project. “We will have completed a 20-percent expansion that is expected by the end of April and [should] result in lower costs, which combined with additional production will see even stronger cashflows from our tin business,” he added.

Don’t forget to follow us @INN_Resource for real-time news updates!
Securities Disclosure: I, Priscila Barrera, hold no direct investment interest in any company mentioned in this article.
Editorial Disclosure: The Investing News Network does not guarantee the accuracy or thoroughness of the information reported in the interviews it conducts. The opinions expressed in these interviews do not reflect the opinions of the Investing News Network and do not constitute investment advice. All readers are encouraged to perform their own due diligence.