The resurrection of the Kitsault mine received a crucial environmental permit last week. But a dispute resolution process started by a local Native group has raised questions. 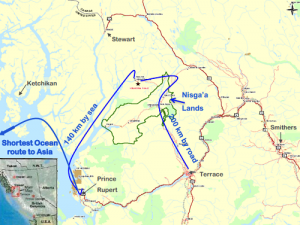 Avanti Mining (TSXV:AVT) saw its share price rise 14 percent on March 20, to $0.08, as investors absorbed the news that the government of British Columbia had granted environmental approval for the company’s Kitsault molybdenum project, 140 kilometers northeast of Prince Rupert, British Columbia.

The Kitsault mine operated from 1968 to 1972 and again from 1981 to 1982. It has proven and probable reserves of 228 million tonnes grading 0.083 percent molybdenum and containing 374 million pounds of molybdenum, according to an updated 2013 feasibility study. The project will produce 40,000 tonnes of ore a day over a planned 16-year mine life. Avanti is now focusing on obtaining the necessary financing and permits, with an eye to starting construction later this year.

The environmental permit came just days after the Nisga’a Lisims Government registered its disapproval of the project by initiating a dispute resolution process with the province. The territory surrounding the mine belongs to the Nisga’a under a historic treaty that was signed in 2000. That accord, called the Nisga’a Final Agreement, was the province’s first modern land claims agreement.

Chapter 19 of the treaty outlines the process for resolving disputes between the Nisga’a and the province. It consists of three stages: formal, unassisted talks; more structured efforts with the help of a neutral third party; and, if the dispute is still unresolved, final adjudication, either through arbitration or judicial proceedings.

“I am disappointed with the decision, but the Nisga’a are within their rights. It is between the Nisga’a and the province,” said Avanti CEO Craig Nelsen in a March 26 phone interview. “But I’m confident that the technical issues they have raised can be addressed, and I’m confident it won’t affect our plans.”

The Nisga’a didn’t respond to a request for comment. However, on March 14, Nisga’a Lisims Government president Mitchell Stevens told the Terrace Standard that he believed political considerations were pushing the province to make a hasty decision on the mine. BC will hold an election on May 14.

“We fear that the current political environment could be driving a premature decision by provincial ministers to approve this mine before all the facts are in,” he said. Stevens also raised concerns about the project’s effect on water quality: “Moreover, the project effects will include a loss of approximately 50 per cent of the aquatic life and habitat in a significant local watershed downstream of the mine site. This could have potential but as yet unknown corresponding effects in Alice Arm,” he added.

“The environmental assessment provided a roadmap to mitigate the project’s impact,” said Nelsen. “Based on that, the review found that the mine will have no significant adverse impacts.” In a March 15 press release, Avanti called BC’s environmental assessment process “one of the most rigorous anywhere.” Avanti spent about $13 million on it, and has invested about $70 million in the project so far.

Nelsen also dismissed concerns that the decision was rushed. “From the time we submitted the application, on December 20, 2011, to March 18, 2013, is about 15 months. I don’t know how that can be a rush,” he said. “I think that’s a convenient argument that makes for a good sound bite.”

He feels the company has gone well beyond its obligations to consult the Nisga’a on the project, as spelled out in Chapter 10 of the treaty.

“I’m proud of our engagement with the Nisga’a,” Nelsen said. “We started talking to them in January 2008, before we bought the property. We wanted to make them aware of our plans, let them know that we were aware of the mine’s history and start off on the right foot.”

“We’ve had over 650 engagements with the Nisga’a, and we provided funds for their engagement in the process all along,” he added. “This totaled in excess of $1.3 million from 2009 onward.”

Avanti is particularly interested in tapping into the local workforce, including the Nisga’a. According to the March 15 press release, the construction phase will involve $1 billion of new capital spending over a 25-month period and will create 700 construction jobs. Once the mine is up and running, 300 workers will be needed on an ongoing basis.

Nelsen sees the potential for the Nisga’a to fill a large proportion of those jobs. “At least 300 of the construction jobs could be filled by the Nisga’a, and our goal is to fill about half of the ongoing positions with Nisga’a or other First Nations,” he said. “We have invested in training programs. There is a high level of mechanical skill in the area and a good work ethic, so there are good raw materials to work with.”

Avanti has also partnered with the British Columbia Aboriginal Mine Training Association (BC AMTA) to help bring the necessary skills to local First Nations. “BC AMTA has a good program of melding formal training skills with counseling and support — sort of a mentorship program — to help prepare workers for life as a miner. People have to prepare themselves for the separation involved,” he said. “We look forward to identifying employees. There is a large, unemployed, young population that lives closest to the mine. They are a huge resource.”

The company hasn’t been in contact with the Nisga’a leadership since they launched the dispute resolution process. “When we were awarded the environmental permit, we sent a letter to Mitchell Stevens saying we still wanted to work together and work through the issues, but we haven’t heard back,” he said.

Editorial Disclosure: Avanti Mining is a client of the Investing News Network. This article is not paid-for content.