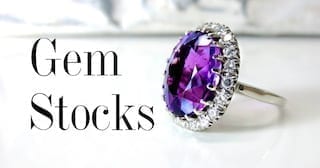 What were the top-performing gem and diamond stocks last year? We’ve put together a brief list of 2017’s five biggest gainers.

With 2017 now at a close, it’s a good time to look back on the top gem and diamond stocks of the year.
While the diamond market faced challenges last year, including declining prices and lower demand, experts have expressed optimism about the future. In terms of the broader gemstone space, gems other than diamonds are gaining some popularity.
Against that backdrop, a number of gem and diamond stocks enjoyed impressive share price increases in 2017. To help investors navigate the market, we’ve compiled a list of the five gem- and diamond-focused companies that have seen the biggest share price gains year-to-date.


Give me my free report!
All gem and diamond stocks are listed on either the TSXV, TSX, LSE or ASX, and had market caps above $10 million as of December 27, 2017. If we missed a company you think should be included, please let us know in the comments.

Current price: $0.55; year-to-date gain: 241.18 percent
At the top of our gem and diamond stocks list is Fura Gems. Named after a Colombian legend, the company holds both ruby and emerald assets. In Mozambique, it has an 80-percent stake in four ruby licenses covering 394.24 square kilometers, and in Colombia Fura has agreed to purchase 76 percent of Esmeracol, which owns the Coscuez emerald mine. It also holds a 100-percent stake in a Colombian emerald exploration concession.
Fura was busy in 2017. It entered into the agreement regarding its Mozambique ruby assets in September, and closed it in November; in October, the company began a drill program at the site. That same month, Fura entered into the agreement concerning Coscuez; that transaction has yet to close.

Current price: $0.20; year-to-date gain: 127.8 percent
Five Star Diamonds is focused on diamond projects in Brazil. Its chief asset is the Catalao project, which was formerly owned by De Beers and Rio Tinto (ASX:RIO,LSE:RIO,NYSE:RIO). Catalao covers 1,999.42 hectares and consists of one exploration license; applications for further exploration licenses are in the works for a further 4,000 hectares. Five Star owns 22 other projects in addition to Catalao.
The diamond stock has performed well throughout the year, and has been active at a variety of projects during the period. Five Star provided an update on Catalao in May, and in Q3 it announced the discovery of the first diamonds at its Riachao project. A few weeks later, it commenced a Stage 2 program there. In December, Five Star recovered the first diamonds at Maravilha, another one of its projects.

Current price:$0.24; year-to-date gain: 33.33 percent
Exploration company North Arrow Minerals has eight projects in Canada ranging from greenfields to advanced stage. Like the other companies on this gem and diamond stocks list, the company had an eventful year, and completed work at a number of its properties.


Give me my free report!
At the beginning of the year, the company closed its acquisition of the Qilalugaq and Pikoo projects; it also sold its Contwoyto project, which includes the Butterfly gold prospect. In recent months, North Arrow has discovered diamonds at its Nunavut-based Mel project and completed a summer drilling and mini bulk-sampling program at the Q1-4 kimberlite at its Naujaat project (formerly Qilalugaq), also in Nunavut. Since then, the company has started processing samples collected during the summer.

Current price: $1,528.47; year-to-date gain: 31.21 percent
Global mining giant Anglo American, mines a variety of commodities, including diamonds. The company owns 85 percent of De Beers, the world’s leading diamond company, with the remaining 15 percent owned by the government of Botswana. De Beers produces roughly one-third of the world’s supply of diamonds, and owns diamond mines in Botswana, Canada, South Africa and Namibia.
This year, the diamond stock had a dip in Q2, but has generally been on an upward trend. In December, Anglo American said that the 10th sales cycle of the year for De Beers “saw the continuation of good demand for … rough diamonds.” Additionally, in its Q3 production report, the company said that De Beers saw stable trading conditions during the period, with that stability resulting in increased production. In total, production went up from 6.3 million carats in the year-ago quarter to 9.2 million carats.

Current price:$74.83; year-to-date gain: 24.57 percent (data derived from ASX listing)
Like Anglo American, Rio Tinto is a major diversified miner whose operations include diamond mines. Currently the company operates two diamond mines: the Diavik mine in Canada and the Argyle mine in Australia. Its stake in Diavik stands at 60 percent.
Argyle has produced over 800 million carats of rough diamonds, and is the world’s largest supplier of colored diamonds. In August 2017, Rio Tinto announced the debut of its largest ever red diamond, sitting at 2.11 carats. Meanwhile, Diavik is located in the Northwest Territories and produces 6 to 7 million carats each year. In total, Rio Tinto’s diamond business comprises 1,500 people worldwide.
What were your top gem and diamond stocks this year? And what did you think of diamond prices? We want to hear your thoughts, so ket us know in the comments section.
The data for this article was retrieved on December 27, 2017. Only TSXV-, TSX- , LSE- and ASX-listed diamond companies with market capitalizations greater than $10 million were considered.
Don’t forget to follow us @INN_Resource for real-time news updates.
Securities Disclosure: I, Amanda Kay, hold no direct investment interest in any company mentioned in this article.