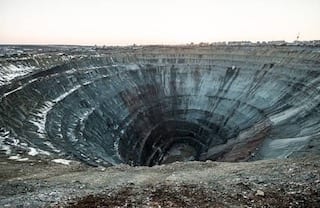 Do you know where diamonds are produced? These 10 mines were the world’s top diamond-producing mines by output and value in 2016.

The story of the modern diamond market begins in 1871, when the De Beers and Kimberley mines were discovered in South Africa. That milestone helped De Beers, now owned by Anglo American (LSE:AAL), become the world’s largest diamond producer.
Despite some volatility in the market, global demand for diamonds has remained strong. According to Morgan Stanley (NYSE:MS), worldwide supply of rough diamonds is expected to expand to meet that demand between 2016 and 2021, driven by growth mainly in Canada and Russia. Overall, prospects for the market look bright.
But where are most diamonds being mined today? Read on for a brief overview of the world’s 10 top diamond-producing mines by output and value, based on 2016 data compiled by expert Paul Zimnisky. You can also click here to read about the five countries that produce the most industrial diamonds.

Production: 11,975,000 carats
Value: $2,347 million
Jwaneng is the richest diamond mine in the world by value. The mine became fully operational in August 1982 and is owned by De Beers and the government of Botswana. Production normally varies between 11 and 15 million carats per year. De Beers plans to invest $2.2 million in a seven-year expansion project to extend the mine’s life beyond 2040.

Production: 11,975,000 carats
Value: $1,431 million
ALROSA (MCX:ALRS) estimates that its Jubilee mine will produce 9.2 million carats worth $1.4 billion in 2017; that amount represents 9 percent of global diamond output by value. The company’s portfolio includes 11 diamond mines and five alluvial operations that together account for 27 percent of global diamond production by volume and 33 percent by value.

Production: 3,948,000 carats
Value: $829 million
Since 1999, the International mine has been operated by ALROSA. It is characterized by very high diamond grades of up to 8.09 carats per ton. The underground mine is expected to run until 2022 at a design capacity of 500,000 tons of ore per year.

Production: 7,931,000 carats
Value: $753 million
Orapa, another joint venture between De Beers and the Botswana government, is a conventional open-pit mine that was discovered in 1967 and became fully operational in July 1971. Currently, Orapa is being mined at a depth of 250 meters, and is expected to reach 450 meters by 2026.

Production: 1,169,000 carats
Value: $585 million
De Beers’ offshore mining operation, Debmarine, produces over half of Namibia’s diamonds by volume and value. Debmarine is currently the only large-scale marine mining operation in the world, with a fleet of five specialized marine mining vessels that screen material recovered from the ocean floor at depths of 90 to 140 meters.

Production: 6,700,000 carats
Value: $570 million
Catoca is owned by four entities, primarily Endiama, Angola’s state diamond miner, and ALROSA. This year it is expected to produce 6.5 million carats worth over $600 million. Catoca is the world’s fourth-largest diamond mine in terms of production and accounts for almost 70 percent of Angola’s diamond output.

Production: 5,001,000 carats
Value: $565 million
Nyurbinskaya is another of ALROSA’s diamond mines. It has been operated by Nyurba, one of the company’s youngest mining and processing divisions, since 2001. This open-pit mine has a current depth of 290 meters, and it located at the Nakyn ore field, which also includes the Botuobinsky open pit and two alluvial placers.

Production: 6,658,000 carats
Value: $539 million
Rio Tinto (ASX:RIO,LSE:RIO,NYSE:RIO) operates and owns a 60-percent interest in the Diavik diamond mine in Canada’s Northwest Territories. Diavik commenced production in 2003, and produces some 6 to 7 million carats annually; diamonds at the mine are predominantly large, white and gem quality. Since production began, Diavik has produced 100 million carats of high-quality rough diamonds; the current mine plan has output continuing to 2024.

Production: 5,200,000 carats
Value: $463 million
Dominion Diamond’s (TSX:DDC,NYSE:DDC) Ekati mine was Canada’s first surface and underground mine, and has produced approximately 67.8 million carats since it began operating in 1998. Like Diavik, it is located in the Northwest Territories. The largest gem-quality diamond produced to date at the mine is a 186-carat diamond that came from the Pigeon pit; it was recovered and sold in 2016.

Production: 3,191,000 carats
Value: $463 million
Although open-pit mining at this operation ended in 2004, ALROSA built a series of underground tunnels at the site, and they have continued to yield high-quality rough diamonds. Diamond content at the mine is high, and the average diamond grade exceeds 3 carats per ton. Reserves at Mir are sufficient to continue mining with a design capacity of 1 million tons of ore per year until 2043.
Don’t forget to follow us @INN_Resource for real-time news updates!
Securities Disclosure: I, Priscila Barrera, hold no direct investment interest in any company mentioned in this article.