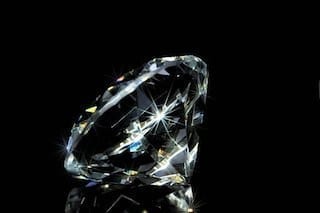 The 102.34-carat diamond is the world’s largest, rarest and most valuable D-flawless round white stone ever offered for private sale.

Sotheby’s claims that the diamond, mined by diamond powerhouse De Beers in Botswana, is the “world’s largest, rarest and most valuable D-Flawless round white diamond to have ever been offered for private sale.”

It believes the gem could sell for over $33 million.

Revealing the diamond was the company’s way of marking the first anniversary of its salon on London’s New Bond Street. Diacore, a South Africa-based manufacturer, spent six months cutting and polishing it.

In addition to its size, the diamond’s round shape also makes it attractive. Round is the most sought-after shape for colorless stones, says Sotheby’s, as diamonds with this shape give the most “light and life.”

According to the auction house, the stone is also the most perfect color, clarity and cut ever graded by the Gemological Institute of America.

Patti Wong, founder and chairman of Sotheby’s, stated, “[i]t is a masterpiece of nature brought to life by human hand, blazing with a brilliant firework-like display of almost every color on the spectrum — mesmerizing to behold.”

The stone belongs to an ultra-rare subgroup of gem-quality diamonds known as type IIA. This type is known for its chemical purity and for being crystal clear to the eye.

To date, only seven D-color diamonds weighing more than 100 carats have ever been sold at an auction, and none of them have been round brilliant cuts.

Diamond cutters usually prefer to try and maximize carat weight when working with rough stones, which usually means choosing a more common shape such as cushion, emerald or pear.

Palladium’s Next Boomtown: Northern Ontario?
US Turns the Screws on Maduro’s Venezuela
Investors “More Focused” with Their Cannabis Plays, Expert Says
A New Company Wants to Add Canadian Money to the Tech Sector