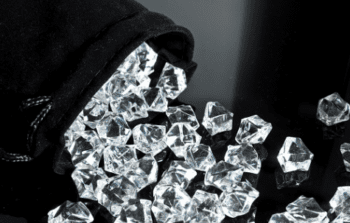 After De Beers’ biggest sale in a year, the rough diamond market is optimistic about demand for 2017.

The gem industry restocked after the holiday period, with De Beers, the world’s biggest diamond producer, having its biggest diamond sale in at least a year, boosting confidence that demand is continuing to rebound in 2017.
World Federation of Diamond Bourses President Ernie Blom said the rough diamond market has opened very strongly this year and that the polished market is likely to follow, “I expect a robust diamond market going forward,” he added.
De Beers, owned by Anglo American (LON:AAL), sold $720 million of diamonds in its first sale of the year, compared with $545 million last year. De Beers said it saw “good demand” across most diamond categories, while there was a larger-than-usual gap between its previous sale.

CEO Bruce Cleaver also attributed the recovery to the reopening of some diamond polishing operations in India, which matched higher demand for smaller, lower quality rough diamonds.
About 90 percent of the global rough diamond supply is cut and polished in India, with the sector employing around 800,000 people in highly-skilled jobs. But last November, Prime Minister Narendra Modi scrapped 500- and 1,000-rupee banknotes that shook up diamond polishing in the country, as small units mainly do business in cash.
“While the reopening of some diamond polishing operations in India saw something of an increase in demand for smaller, lower-quality rough diamonds, we maintain a cautious outlook for these categories as the Indian industry continues to adjust to the post-demonetization environment,” Cleaver added.

De Beers sells its diamonds at ten sales a year, known as sights, in Botswana’s capital Gaborone. The company’s biggest sale last year was $666 million in April with the lowest one being $418 million in December.
But De Beers was not the only one with good news in the diamond market. Most recently, Petra Diamonds (LON:PDL) said revenue leapt 48 percent in the first fiscal half because of steady demand following a stabilization in the rough market.
“Signs of stabilization in the rough diamond market are evident with steady demand across the majority of size ranges,” the company said.
That said, Alrosa PJSC (MCX:ALRS), the second-biggest diamond producer, announced that it expects rough-diamond production to increase significantly this year supported by optimism in the rough market.
Anglo American (LON:AAL) shares climbed up 5.88 percent after the sales announcement was public on Tuesday, and are currently at $1,379.09. Alrosa PJSC (MCX:ALRS), gained 2.75 percent the same day, and its shares are currently sitting at $103.70.
Don’t forget to follow us @INN_Resource for real-time news updates!
Securities Disclosure: I, Priscila Barrera, hold no direct investment interest in any company mentioned in this article.

One response to “The Rough Diamond Market Awakens”