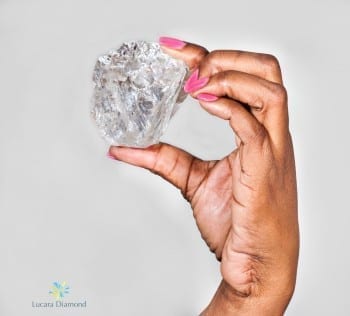 A 1,111-carat Type IIa diamond found at the company’s Karowe mine is the second-largest gem-quality diamond ever recovered.

Vancouver-based Lucara Diamond (TSX:LUC) made headlines late Wednesday when it announced the discovery of a 1,111-carat Type IIa diamond.
According to the company, the stone, which was recovered at the south lobe of its Botswana-based Karowe mine, measures 65 by 56 by 40 millimeters in size, and is the second-largest gem-quality diamond ever recovered. Only the 3,1065.75-carat Cullinan diamond, discovered in South Africa in 1905, is larger.
Here’s a look at the diamond:


The good news was compounded Thursday morning when Lucara reported the discovery of two more exceptional white stones at Karowe. One weighs in at 813 carats and the other is 374 carats, though those numbers are subject to change as the gems have not yet been cleaned.
President and CEO William Lamb was understandably pleased after the first discovery, commenting in a release that the “historic diamond recovery puts Lucara and the Karowe mine amongst a select number of truly exceptional diamond producers.” He added, “[t]he significance of the recovery of a gem quality stone larger than 1,000 carats … cannot be overstated.”
By the second discovery Lamb was feeling even more dumbfounded. “I am truly at a loss for words. This has been an amazing week for Lucara with the recovery of the second largest and also the sixth largest gem quality diamonds ever mined. We are truly blessed by this amazing asset,” he said Thursday.


Give me my free report!
Investors have also reacted well to the news. As of 12:46 p.m. EST on Thursday, Lucara’s share price was sitting at $1.99, up 23.6 percent. Earlier in the day it reached $2.18, not far from its 52-week high of $2.45.
That said, diamond market watchers haven’t wasted time in starting to ask questions about the diamond. Namely, “how much is it worth?”
Speaking to The Wall Street Journal, Phil Swinfen, an analyst at Numis Securities, suggested it could sell for $40 to $60 million. However, he also pointed out that given the stone’s historical significance “the value could take on a life of its own and achieve significantly more” — a point that Lamb has echoed.
That said, Swinfen also pointed out that it’s tough to value the diamond without more details on its color and how it could be cut. As yet Lucara has not done a proper analysis because the diamond doesn’t fit in its scanning machine.
For his part, Lamb isn’t too concerned about making a sale just yet. “We’re not desperate to sell it,” he said in a conference call Thursday. According to Bloomberg, when the gem does sell it will likely be bought by a jeweler or consortium of investors that will then decide the most profitable way to cut it — for perspective, the Cullinan diamond was cut into nine major gemstones and 96 smaller stones.
Until that happens, investors will likely be watching with excitement for new developments from Lucara and Karowe. After all, according to Investec (LSE:INVP), the company’s news this week is “balance-sheet-changing.”

One response to “Lucara Diamond Soars on Major Discovery”

See our exclusive index of Diamond companies on the move
EXPLORE