Global Rough Diamond Production About to Reach its Peak

Despite the recent opening of two new mines, global rough diamond production will reach its peak by 2019 and there will be a supply deficit only a year after that.

Despite the recent opening of two new mines, global rough diamond production will reach its peak by 2019 and there will be a supply deficit only a year after that, two separate reports published this week show.
Global rough diamond production will reach its peak in only three years before entering into a supply deficit by 2020, two separate reports show.
According to one of them, unveiled Wednesday by consulting group GlobalData, production of rough diamonds will increase from 127 million carats last year to 134.5 million carats by 2020, a compound annual growth rate of 2.1%.
Such growth will be supported by the expansions at operating mines including Lukoil Oil Company’s Vladimir Grib project in Russia, the Diavik and Ekati Diamond mines in Canada, and Rio Tinto’s Argyle mine in Australia, said Cliff Smee, GlobalData’s head of research and analysis for Mining.
But from 2019 onwards, output will begin to decline due to depleting reserves at Argyle, Diavik and Ekati, which accounted for roughly 18% of global production this year.
The expected supply deficit could be worsened by the fact that 47% of global diamond production comes from countries of high political risk, including the Democratic Republic of Congo and Russia, the report says. Supply could fall below projected levels if political disruption affects projects in those countries, it adds. 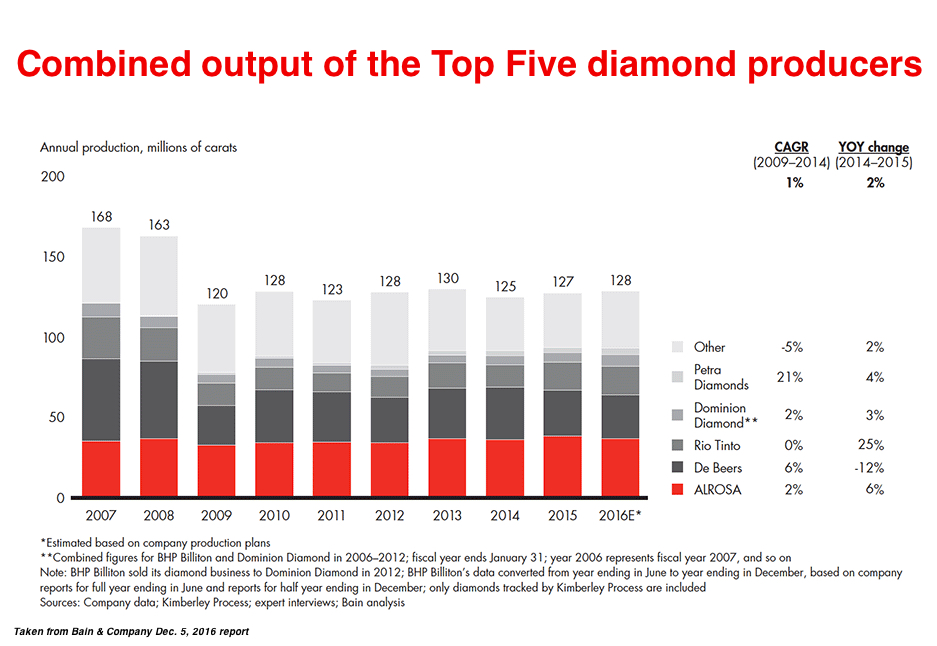 Another report, published earlier in the week by Bain & Company, expects rough diamond output to rise sharply in 2017 after stagnating for the best part of a decade. The analysts see global production increasing to around 150 million carats by 2019, before declining over the following decade by an average of 1% to -2% a year.
New supply from the Luaxe mines in Angola will be partly offset by likely delays in the operations at the Bunder mines in India and the shutting down of De Beers’s Snap Lake in Canada, the analysts added.
The post Global rough diamond production about to reach its peak appeared first on MINING.com.