Dunnedin Ventures Inc. (TSXV:DVI) today reported that the date of record for a Plan of Arrangement to spin out rights to gold mineralization at its Kahuna project, Nunavut, will be June 30, 2017.

Dunnedin Ventures Inc. (TSXV:DVI) today reported that the date of record for a Plan of Arrangement to spin out rights to gold mineralization at its Kahuna project, Nunavut, will be June 30, 2017.
The Company also announces its exploration plans to define drill targets across its Kannuqa gold belt, an approximately 300 square kilometre folded greenstone belt that has sourced widespread gold-in-tills, gold-in-bedrock, and gold in drill core, and is surrounded by Agnico Eagle Mines Ltd.’s (TSE: AEM; “Agnico”) Meliadine project to the north, west and south. 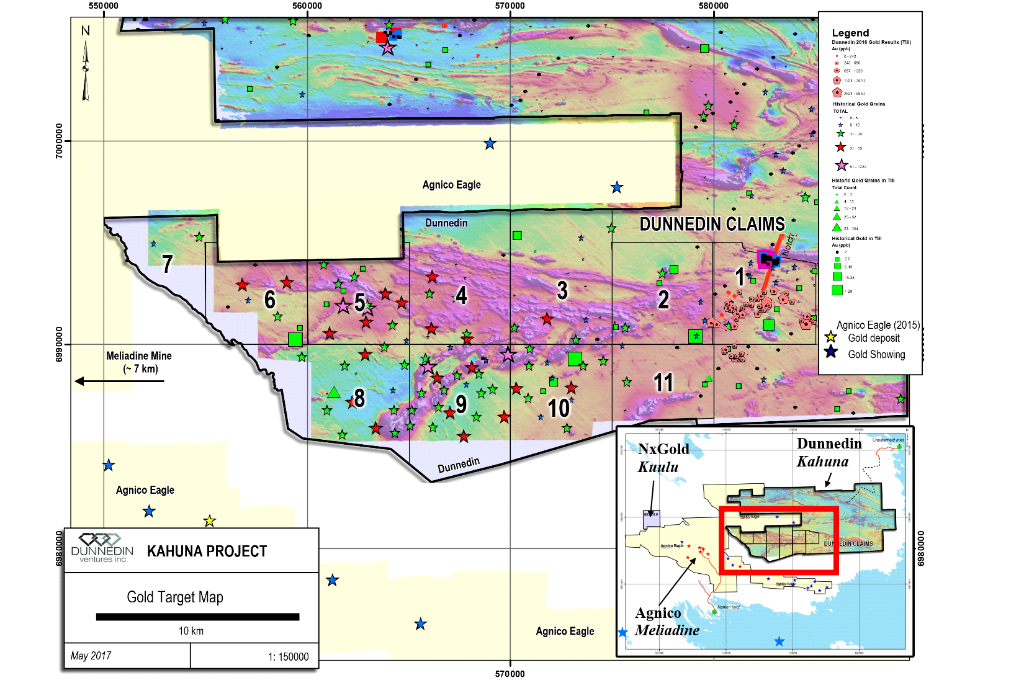 The Kannuqa belt is one of four gold-bearing metasediment belts have been explored at Kahuna.  Details of the other gold belts will be made available as results of last summer’s exploration are received. The Kannuqa belt covers approximately 300 km2(30,000 Ha), and has been divided for exploration purposes into 11 blocks averaging 25 square kilometres each.  All blocks contain gold occurrences as follows.
Table 1: Kannuqa Gold Belt sample results combined from historic data and Dunnedin’s 2015 till survey.

“We’ve identified more than 50 areas with concentrated gold-in-tills that include pristine, locally derived gold grains.  These were deposited down-ice from nearby bedrock sources that appear to lie within the Kannuqa gold belt,” said Chris Taylor, CEO of Dunnedin. “While gold is widespread in tills throughout the belt, it is concentrated near bedrock fold hinges in a pattern similar to that published at Meliadine.  As the Kannuqa belt begins less than 15 kilometres from the Meliadine mine site, it is a near-term priority for Dunnedin’s exploration efforts and has excellent potential to host new gold discoveries.”
Dunnedin confirmed historical gold-in-till results through recovery of proximally-sourced gold grains from Block 1 as disclosed on October 17, 2016.  Dunnedin expects to soon receive gold results from till samples collected across the Kahuna project in 2016.  These will include new results from the Kannuqa gold belt, which will direct upcoming exploration.
Field crews are expected to mobilize in early June 2017, when ground conditions allow.  The Company will expand its gold-in-till sampling grid across each of the 11 defined exploration blocks, including higher density sampling around high historical grain counts, and will undertake a geological prospecting and mapping program that will define drill targets at each block.  Drilling will be planned and implemented based on results received from this work.
As previously disclosed, a property-wide diamond exploration program will be concurrently undertaken, including drill testing of a number of high priority diamond indicator mineral sources, and collection of diamondiferous kimberlite bulk samples for diamond valuation purposes.  All till sampling conducted across the property will be screened for both indicator mineral and gold content, as Dunnedin has observed gold grains and kimberlite indicator minerals occur together in the majority of samples.
As disclosed on May 1 2017, Dunnedin has accelerated its 100 percent earn-in of the Kahuna project and is proceeding with its intention to spin out rights to gold mineralization at the Kahuna project.  The project and rights will be spun out into a wholly-owned subsidiary pursuant to a Plan of Arrangement under the Business Corporations Act (British Columbia).  The Arrangement will also include an agreed upon working capital amount to facilitate exploration activities at these projects.
Shareholders of record on June 30 2017 will be entitled to receive a distribution of shares in a new gold entity that will be listed on a Canadian stock exchange.  Additional details regarding the Arrangement will be provided as they become available.
Mr. R. Bob Singh, P.Geo, Exploration Manager, is the qualified person responsible for the technical content of this news release.
For further information please contact Mr. Knox Henderson, Investor Relations, at 604-551-2360.
On behalf of the Board of Directors,
Chris Taylor
Chief Executive Officer, Dunnedin Ventures Inc.
About the Kahuna Project
Kahuna is an advanced stage high grade diamond project located near Rankin Inlet, Nunavut.  Dunnedin is now recovering diamonds and indicator minerals from a series of kimberlite and till samples collected in from two seasons of field work.  An Inferred Resource released by Dunnedin showed over 4 million carats of macrodiamonds (+0.85 mm) at a grade of 1.01 carats per tonne had been defined along the partial strike length of the Kahuna and Notch kimberlite dikes through shallow drilling.  The largest diamond recovered was a 5.43 carat stone from the Kahuna dike which was a piece of a larger diamond that had been broken during the sample preparation process and was reconstructed as having an original size of 13.42 carats.  Recent results include a 0.82 tonne sample of the PST kimberlite dike which returned 96 macrodiamonds totalling 5.34 carats (+0.85 mm) and a 2.36 tonne sample of the Notch kimberlite which returned 89 macrodiamonds totalling 2.38 carats (+0.85 mm).
The Kahuna project is located adjacent to the development-stage Meliadine gold project of Agnico Eagle Mines Ltd. Meliadine has approximately 14.5 million tonnes of Proven and Probable Reserves grading 7.32 g/t gold, containing 3.4 million ounces of gold as of December 31, 2015.   There is an additional Indicated Resource of 20.7 million tonnes grading 4.95 g/t gold containing 3.3 million ounces of gold, and an additional Inferred Resource of 14.7 million tonnes grading 7.51 g/t gold containing 3.5 million ounces of gold (source: www.agnicoeagle.com).
Neither TSX Venture Exchange nor its Regulation Services Provider (as that term is defined in the policies of the TSX Venture Exchange) accepts responsibility for the adequacy or accuracy of this release.
Statements included in this announcement, including statements concerning our plans, intentions and expectations, which are not historical in nature are intended to be, and are hereby identified as, “forward-looking statements”.  Forward-looking statements may be identified by words including “anticipates”, “believes”, “intends”, “estimates”, “expects” and similar expressions. The Company cautions readers that forward-looking statements, including without limitation those relating to the Company’s future operations and business prospects, are subject to certain risks and uncertainties that could cause actual results to differ materially from those indicated in the forward-looking statements.
Click here to connect with Dunnedin Ventures Inc. (TSXV:DVI) to receive an Investor Presentation.