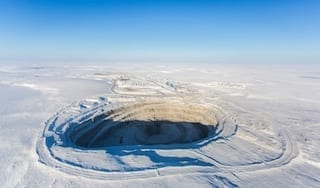 Dominion Diamond will seek permits for the project in the third quarter of 2017.

Dominion Diamond (TSX:DDC,NYSE:DDC), the world’s third-largest producer of rough diamonds by value, will seek permits for the underground Misery Deep project at its Ekati diamond mine in Q3 2017.
The decision comes after the release of a positive prefeasibility study (PFS) for Misery Deep that shows probable mineral reserves of 1.8 million tonnes and 8.7 million carats. The project will require an investment of $6 million in 2018, $69 million in 2019 and $19 million in 2020, Dominion said in a statement, and has an IRR of 40 percent and a NPV of $92 million.
“Our exciting high-return Misery Deep project, with a post-tax IRR of 40 percent, is advancing towards development and is expected to enhance our production profile at Ekati over the medium term,” said Jim Gowans, Dominion’s chairman of the board.


Give me my free report!
Ekati, which was Canada’s first surface and underground mine, has produced approximately 67.8 million carats since it began operating in 1998 in the Lac de Gras region of the Northwest Territories.
The Misery Deep PFS looks at the underground development of the Misery Main pipe, one of six kimberlite pipes at Ekati. The Misery Main pipe is currently in production as an open-pit operation, and is expected to account for approximately 20 percent of tonnes processed and 60 percent of carats recovered at Ekati in the 2018 fiscal year.
Independent diamond industry analyst and consultant Paul Zimnisky told the Investing News network that “it looks like [the Misery Deep project] might be economic, which would essentially fill a production gap between 2020 and 2023.” During that period, Dominion will have finished mining at the Misery Main pipe, but will not have begun production at Jay, another pipe at Ekati.
The Misery Main pipe has produced a number of high-value fancy yellow and orange diamonds with valuations ranging from $10,000 to $150,000 per carat. Last year, Dominion uncovered a 66-carat fancy yellow diamond called the “Arctic Sun.” It is the largest fancy colored diamond ever found in Canada.
Dominion, which rejected a $1.1-billion takeover bid earlier this year, expects first production at Misery Deep to come in 2019. This year, the company is focusing on exploration activities at its Ekati and Diavik mines, and is expected to spend between $115 and $140 million to grow the company in 2018.
“We are mining and exploring in what is still a relatively young mining district,” said Gowans. “There has been no greenfield exploration at Ekati since 2007, and of the 150 known kimberlites, only about 40 have had follow-up bulk sampling. We believe there is strong potential for further exploration success at Ekati and Diavik, and throughout the highly-prospective Lac de Gras region.”
Dominion’s share price was up 34.9 percent year-to-date on the TSX at close of day Tuesday, sitting at $17.55.
Don’t forget to follow us @INN_Resource for real-time news updates!
Securities Disclosure: I, Priscila Barrera, hold no direct investment interest in any company mentioned in this article.