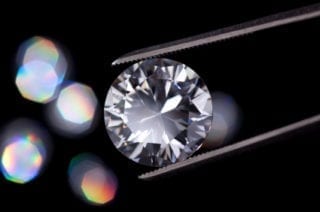 Despite expected volatility, the diamond industry still saw growth in 2016, which analysts expect to continue in 2017.

The diamond industry saw growth in 2016, which makes the diamond outlook in 2017 bright, according to analysts.
The Bain & Co. 2016 Diamond Industry Report said that the diamond industry was on the rebound in 2016 due to a re-stocking by midstream players and growth in rough-diamond sales in the first half of 2016.
Following the Zimnisky Global Rough Diamond Price Index — which was up 12 percent in 2016 — the index shows a spike in the latter part of June and has relatively held its position for the remainder of the year. Paul Ziminsky attributed this to, “softening seasonal demand but also the demonetization in India which is primarily affecting lower valued goods purchased by smaller independent manufacturers.”
As for the diamond outlook for 2017, De Beers’ Diamond Insight Report 2016 stated that increased sales coupled with volatility are likely, and diamond production would most probably increase in the short term and decline slowly after 2020. The report also said that large, economically viable new discoveries are unlikely.

2016 saw major moves by diamond miners. De Beers and Mountain Province Diamonds’ (TSX:MPV,NASDAQ:MDM) Gahchko Kue mine in the Northwest Territories, Canada officially opened on September 20, while Stornoway Diamond (TSX:SWY) opened its Renard diamond mine in Quebec, Canada on October 19.
Rio Tinto (NYSE:RIO) announced in August that it is shutting down the Bunder diamond mine in India by the end of 2016 to cut costs. De Beers’ Snap Lake mine continues to be on care and maintenance. Another one to note would be Dominion Diamond (TSX,NYSE:DDC) laying off 51 workers at its Diavik diamond mine in the Northwest Territories in late November.
In November, Lucara Diamond (TSX:LUC) reported that it sold 1,098 carats of rough diamonds for gross revenues of US $38.7 million from its second Exceptional Stone Tender of 2016. Its 812.77 carat diamond named, “The Constellation” reportedly sold for US $46,138 per carat in May – Rapaport said, the sale is “breaking “all records” for a rough diamond.”
In December, a  21.33 carat fancy pink-brown diamond reportedly sold for $42,907 per carat at a Bonhams’ Fine Jewely sale in London.

To drill down further into 2016 and the diamond outlook for 2017, INN spoke to Yaniv Marcus of the Diamond Investment & Intelligence Center on how the diamond industry performed overall in 2016, and how things are looking in 2017.
Looking back to the end of 2015, Marcus said he saw stability in 2016, with solid prices at auctions. “Although volume has been stable since the end of 2015, prices have improved, and increased somewhat. Producers are still cautious about the market and are balancing volume vs. price. Polishers are still buying, but are also cautious. They want to be profitable, as that is key for them to get further financing from banks, which have been continuing to step back from the industry. Stability is extremely important and are followed on a monthly basis,” he said.


Give me my free report!
In an article, Paul Ziminsky said, “The bellwether producers (the miners) took action towards to end of last year in an attempt to normalize the supply/demand balance, in an effort to provide a lifeline to their clients. The producers took a two-pronged approach, reducing rough supply to the market, either through production cuts and/or inventory build, and reducing prices, with a goal of restoring the rough/polished price spread, essentially returning profitability to the manufacturers.”

Marcus said that for fancy color diamonds, “unique and high end fancy color diamonds continue to climb–a slower climb–but solid, especially for rare pink and blue diamonds.”
Marcus also mentioned Rio Tinto’s (ASX:RIO,LSE:RIO,NYSE:RIO) Argyle Pink Diamonds Tender in 2016. This year, the company achieved the highest average price per carat since 1984, when the Tender began. The 2016 Argyle Pink Diamonds Tender was a collection of 63 rare pink, red and violet diamonds that came from Argyle’s underground mine. Marcus said,  “The recent Argyle tender has been broken down to several key players, and funds continue to bid higher prices for these rare pink diamonds. Once the mine closes down in the next 5 years or so, 90 percent of global pink diamonds will disappear and the only market that will be left is secondary.”
In 2017, Marcus sees that fancy color diamond prices will go up, especially for pinks and blues, “simply because there is more wealth created year over year, and the willingness to pay more exists.”
Collectors are indeed willing to pay any price — a 9 carat fancy vivid pink pear-shaped diamond sold for US $18 million at Christie’s in November 2016.
He emphasized that fancy color diamonds are still a safe haven investment, and said, “[V]alue of money decreases constantly, and with the US printing more money than ever, it is only a matter of time before the straw on the camel’s back will break….and the dollar will lose value. It is true that the world had a habit of running to the dollar for protection, but moving forward, it will no longer be the case; redemption of US debt is on the rise, and economies like China and India are increasing their exposure to a global basket of currencies. Some countries have already started piling diamonds as part of their security fund.”

Marcus also acknowledged that despite the increase in sales of lab-grown diamonds, “This, in my opinion, is not a true threat to real, natural diamonds. Nothing will replace nature.”
The De Beers report listed synthetic diamonds as a trend in 2016, and said that it is likely that the production of synthetic diamonds will continue to expand. Meanwhile, investment firm Morgan Stanley released a report in August that said, “lab-grown diamonds could take a 15 percent market share in gem-quality melee diamonds and a 7.5 percent share in sales of larger diamonds by 2020.”
Indeed, synthetic diamonds were introduced at retailer Barneys New York in October 2016. The collection is from Diamond Foundry, whose shiniest investor would be actor Leonardo DiCaprio.

Marcus previously recommended Petra Diamonds as a company to watch in 2016. He said, “When I recommended Petra Diamonds (LON:PDL), at the end of 2015, it was just under $70.00, while now, after 10 months it is sitting at around $133.00. After a correction–the run up in the last month–it went from $110.00 to $147.00. I do not own any shares, but with the advancement of the new plan, it is on target to hit production as planned, and that will be reflected in the share price, which should climb back to its historic highs.”
In closing, Marcus said, “I see further consolidation of the value chain of the diamond industry–meaning less layers between mine and consumer is imminent in order for the industry to improve, and further transparency is needed and will happen; further education will help consumers better invest, and increase integrity in the diamond investment area of the industry.”

Volatility goes hand in hand with the diamond industry, but with continued demand for natural diamonds, as well as the consumer’s willingness to pay more, investing in the diamond space in 2017 is still worth evaluating.

Related reading:
Diamond Outlook 2016: Summer to Bring Higher Prices?
Don’t forget to follow us @INN_Resource for real time updates!
Securities Disclosure: I, Pia Rivera, hold no direct investment interest in any company mentioned in this article.
Editorial Disclosure: The Investing News Network does not guarantee the accuracy or thoroughness of the information reported in contributed article. The opinions expressed in these interviews do not reflect the opinions of the Investing News Network and do not constitute investment advice. All readers are encouraged to perform their own due diligence.

One response to “Diamond Outlook 2017: A Brighter Year Ahead”