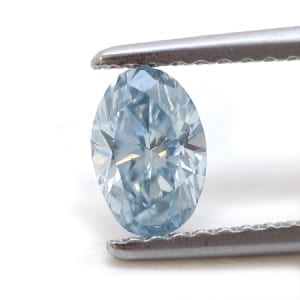 Blue diamonds have been making headlines on the auction block. Here’s a look as to why.

Looking at recent diamond auctions, investors will note that blue diamonds are dominating headlines. The most recent instance is of the disappointment following the Sotheby’s auction of the late Shirley Temple‘s 9.54 carat rare blue diamond. Anticipated to fetch between $25 million to $35 million, the rare diamond ring closed at $22 million, failing to sell. Still, despite the let down with the Shirley Temple’s diamond, there are more opportunities for investors in the future.
One of those opportunities is the upcoming Oppenheimer Blue diamond in Geneva on May 18. On the auction block is the largest fancy vivid blue diamond ever to be offered at auction. The rectangular-cut stone measures 14.62 carats and is expected to fetch a record setting price.
The Robb Report noted that “[c]olorful diamonds like the Oppenheimer continue to command high prices at auction.”

Why are blue diamonds so special?

Although the Shirley Temple failed to sell on April 19, blue diamonds have sold for significant sums. For instance, the Zoe Diamond – sold in November 2014 at Sotheby’s – set an auction record of $32.6 million. Meanwhile, in 205 the 12.03-carat Blue Moon reigned in $48.5 million –  a record for any gemstone. Moreover, the 10.10-carat De Beers Millennium Jewel 4 sold at auction for $31.8 million earlier in April 2016.
With the high value of these stones, investors might wonder what makes colored diamonds – in this case blue diamonds – such a hot topic.
Robb Report writes that just because there are more headlines does not mean that there are more blue diamonds, instead “it means that more people have learned to appreciate them.”
Rahul Kadakia, Christie’s head of jewelry commented recently that “less than 2 percent of diamonds discovered in the world are blue.” Furthermore, a mere 10 percent of all blue diamonds discovered are larger than a carat, meaning that these large stones being sold at auction are highly prized and indeed quite rare.
Don’t forget to follow us @INN_Resource for real-time news updates!