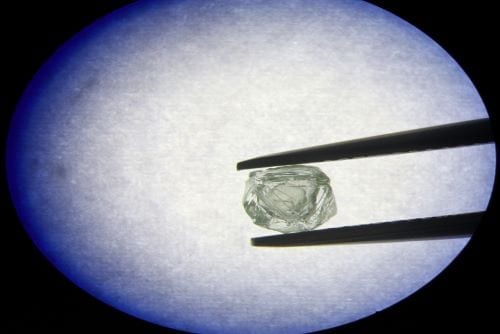 This marks the second remarkable find for the miner in October; earlier in the month, a rare diamond within a diamond (pictured) was unearthed.

Russian diamond miner ALROSA (MCX:ALRS) has unearthed a 232.4 carat gem-quality diamond, the largest discovery of its kind for the diamond major in the last three years.

The stone was recovered from the Udachnaya kimberlite pipe, which was originally identified in 1955.

According to the company, the Udachnaya kimberlite pipe is one of the largest primary diamond deposits not only in the Yakutia, but also around the world. The mine has produced hundreds of large diamonds since it entered production in 1967.

It’s been a profitable year for the company’s Udachnaya pipe, which produced 2.385 million carats of rough diamonds between January and September of this year.

This latest discovery marks the biggest find for the gem producer in recent years. The octahedron-shaped diamond is punctuated with a yellowish hue, as well as several chips.

“Such large gem-quality crystals are extremely rare. Of course, they are present at ALROSA’s deposits, but we have not seen them since 2016, when two diamonds weighing over 200 carats were mined,” said Evgeny Agureev, deputy CEO of ALROSA.

Earlier this month, the Russian miner discovered an extremely rare diamond within a diamond, which it dubbed the “Matryoshka” in honor of the traditional Russian nesting dolls.

The company asserts that it is the first diamond with a diamond moving freely inside of it to ever be recovered. Experts brought in by ALROSA have developed two theories that may explain how the one-of-a-kind gem was formed.

The first possibility involves a mantle mineral enveloping a diamond during its growth process and then dissolving.

The second is a little more complicated.

“A layer of porous polycrystalline diamond substance was formed inside the diamond because of ultra-fast growth, and more aggressive mantle processes subsequently dissolved it. Due to the presence of the dissolved zone, one diamond began to move freely inside another,” notes the company announcement.

The miner hasn’t said what it plans to do with the special stone; however, its rarity and exclusivity isn’t lost on the Russian company.

“As far as we know, there were no such diamonds in the history of global diamond mining yet,” said Oleg Kovalchuk, deputy director for the company.

“This is really a unique creation of nature, especially since nature does not like emptiness. Usually, some minerals are replaced by others without cavity formation.”