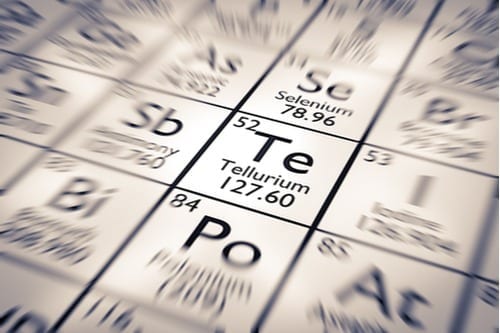 Tellurium is one of Earth’s rarest elements, and while it is more abundant than gold, tellurium is produced in smaller quantities.

Unknown to many mainstream investors, tellurium is a metal of rapidly growing importance.

While technically a metalloid in elemental form, tellurium’s role as a semiconductor has made its use in solar panels highly valuable with the expansion of solar power since 2008.

From its less-than-humble beginnings as a metal alloy used to increase steel and copper’s machining characteristics — it was used in the construction of the outer shell of the first atom bomb — tellurium’s role in thermoelectric applications and its ability to produce some of the highest efficiencies for electric power generation have pushed the element into resource market spotlights in recent years.

Outside of solar production, tellurium is used in rewritable optical discs such as CDs, DVDs and Blu-ray discs, and for the new generation of random access memory (RAM) known as PRAM. However, it is in solar production that most tellurium investors have found the greatest prospects for the resource.

When alloyed with a number of other elements, such as cadmium, mercury, bismuth and zinc, tellurium forms a telluride compound that enhances a material’s ability to conduct electricity; this ability is enhanced when it is also exposed to light. For that reason, tellurium, and cadmium telluride (CdTe) in particular, has become increasingly sought after as a source of thin-film photovoltaic solar panels since First Solar (NASDAQ:FSLR) proved the compound’s economic viability when it began mass commercial production of CdTe solar panels.

In nature, tellurium is typically found fused in telluride ores of gold, copper and silver. Currently, more than 90 percent of production is extracted as a by-product of copper mining and processing.

The top tellurium mining countries are China, Japan, Russia, Sweden and Canada which accounted for 428 metric tonnes of all production last year. The US Geological Survey predicts yearly production levels to remain in the 400 to 500 metric tonnes range for the foreseeable future.

Some gold, bismuth, silver and lead producers have also been able to extract tellurium in small quantities, but unless these companies focus directly on tellurium, their impact on this market is minimal. Confusion between gold and tellurium led settlers in Telluride, Colorado to mistakenly believe that tellurium was present in high quantities in the former gold mining town.

The growth of low-cost thin-film solar cells in recent years has quickly pushed its predecessor to the back-burner as thin-film panels represent a fraction of their production cost. As solar producers seek out new sources of tellurium for CdTe cell production, the market supply has been pushed to the brink of production as no surpluses in the market were present before the market demand crunch.

Roughly 40 percent of all tellurium is used in the solar panel industry. Thermo electric production, metallurgy and the rubber industry make up the rest of global demand.

As a measure of its growing importance, tellurium prices in 2000 were around US$14 per pound for 99.5 percent purity. Since 2009, the price of tellurium almost tripled from US$130 per kilogram to around US$400 in 2011. Prices have since come down and are currently sitting at the US$65 per kilogram range since early 2019.

While the solar panel market is deeply influential in shaping tellurium market dynamics, tellurium is also highly dependent on copper market trends. But, with recent developments in copper production techniques, the availability of tellurium coming out of copper mining has reduced tellurium production. Combined with the rising demand for the material, the price of tellurium is expected to continue trending substantially upwards over the next five years.

While substitutes of the material do exist, including selenium, niobium and tantalum, based on their thermodynamic characteristics, none of these materials possesses the high application quality of tellurium. As such, thin-film solar cell production is regarded as the primary end-use industry for tellurium that drives demand at the moment.

Currently, only a small handful of companies are engaged in producing tellurium. British Columbia exploration and development company, Deer Horn Capital (CSE:DHC) is one of the Canadian companies focused on bringing tellurium to market.

Montreal, Quebec-based 5N Plus (TSX:VNP,OTC Pink:FPLSF) is focused on both metal tellurium production and telluride compounds such as cadmium telluride, cadmium and zinc telluride.

Other companies, such as the Chinese subsidiary of Apollo Solar Energy (HKEX:0556), have focused on integrating telluride-based materials into their thermal exchange system production processes to cut out tellurium production supply risks.

While a growing number of companies will likely seek out tellurium production in the wake of growing demand, only those that can produce high-purity tellurium, 99.5 percent or higher, will be able to adequately supply thin-film solar panel producers.

Commercial-grade tellurium is usually marketed as minus 200-mesh powder but is also available as slabs, ingots, sticks or lumps.

This is an updated version of an article published by the Investing News Network in 2012.

Editorial Disclosure: Deer Horn is a client of the Investing News Network. This article is not paid-for content.