Primary Energy Metals (CSE:PRIM) (FSE: 1WZ:GR OTC: PEMTF) (“Primary” or the “Company”) is pleased to announce it has signed an arms length purchase agreement (the “Purchase Agreement”), dated effective November 6th, 2018, with the shareholders of Prost Vanadium Ltd. (“Prost Vanadium”). Pursuant to the Purchase Agreement, the Company will acquire all of the outstanding share capital of Prost Vanadium. Prost Vanadium holds the rights to 176 vanadium and uranium lode claims in La Sal District of San Juan, Utah.

Patrick Morris, CEO of Primary states: “We are very pleased to increase our land position in Utah with these additional past producing mines. With our neighbours, Energy Fuels, coming online as front runners in Vanadium – Uranium production in North America, we believe this strategic acquisition will not only be good for our shareholders but for the supply chain for these much needed battery metals globally.”

Prost Vanadium is a privately-held exploration-stage resource company, based in Vancouver, British Columbia. Due to its stage of development, Prost Vanadium does not yet generate revenue from operations, and is not expected to in the near term. The Company will issue 12,000,000 common shares to the existing shareholders of Prost Vanadium, in consideration for the acquistion, and will assume liabilities of approximately US$150,000 incurred by Prost Vanadium in connection with the maintenance of the lode claims. The common shares to be issued by the Company will be issued at a deemed price equivalent to the market price of the Company’s common shares at the time of issuance. No finders’ fees are payable in connection with the completion of the acquisition, and the acquistion is not expected to result in a change of control of the Company. 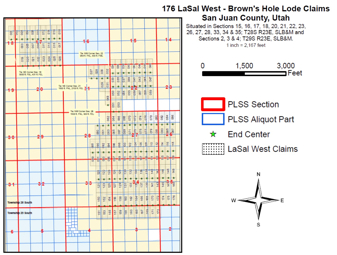 Although vanadium and uranium occurrences are ubiquitous and are known to exist in over 20 distinctly different sedimentary units in the Uravan belt, the Pennsylvanian-Permian Rico Formation and the Upper Jurassic Entrada Sandstone are the only formations which have been mined previously for vanadium and uranium. Most of the past production has come from the Entrada Sandstone. Historically, there have been a number of uraniferous vanadium deposits developed in the Entrada Sandstone along a sinuous trend extending in a north-south direction for over 100 miles. This trend coincides with a major structural feature representing a transitional zone between the Colorado Plateau and the Southern Rocky Mountain physiographic provinces.

Energy Fuels Inc.(NYSE American: UUUU; TSX: EFR) recently announced that they expect to resume vanadium production at their White Mesa Mill in mid-November 2018, producing significant quantities of salable V2O5 product by the end of December 2018. When production begins, Energy Fuels will be the newest vanadium producer in the World and the only primary producer of V2O5 in North America. Following the acquistion of Prost Vanadium, the Company intends to conduct a test-mining program that selectively targets high-grade V2O5 resources at the La Sal Complex, with the goal of significantly increasing productivity and mined grades and reducing mining costs per pound of V2O5 and U3O8 recovered.

Vanadium prices have risen by over 150% in the past year due to a number of factors, including production cuts and significant increases in demand due to the implementation on November 1, 2018 of new rebar standards in China that can only be achieved through increased use of vanadium (with limited substitution). In addition, vanadium demand could increase significantly in the coming years due to the commercialization of vanadium batteries used in connection with renewable energy generation. As of September 23, 2018, the mid-point price of V2O5 as reported by Metal Bulletin was $22.63 per pound, as compared to $9.00 per pound on September 29, 2017. 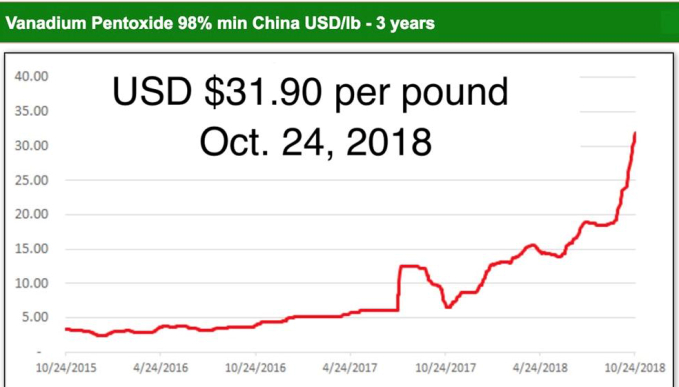 PRIMARY Energy Metals Inc. (CSE: PRIM FSE:1WZ:GR OTC: PEMTF) is a listed junior exploration and development company and is engaged in the business of acquiring, exploring and developing ethically sourced Cobalt, Copper, Nickel and Vanadium focussed mineral resource properties to create value for its shareholders. Current projects include Cobalt in Hazelton British Columbia, and 2 cobalt and 2 vanadium permits in Spain, and 199 vanadium and uranium claims in Utah.

ACQUISITION FOCUS – Other projects Primary is investigating are in the clean energy sector. In this sector, the Company is focused specifically upon exploration opportunities to source green energy power minerals for use in battery production. Primary’s interests in this sector are guided by the following:

Certain information set forth in this news release may contain forward-looking statements that involve substantial known and unknown risks and uncertainties. All statements other than statements of historical fact are forward- looking statements, including, without limitation, statements regarding future financial position, business strategy, use of proceeds, corporate vision, proposed acquisitions, partnerships, joint-ventures and strategic alliances and co- operations, budgets, cost and plans and objectives of or involving the Company. Such forward-looking information reflects management’s current beliefs and is based on information currently available to management. Often, but not always, forward-looking statements can be identified by the use of words such as “plans”, “expects”, “is expected”, “budget”, “scheduled”, “estimates”, “forecasts”, “predicts”, “intends”, “targets”, “aims”, “anticipates” or “believes” or variations (including negative variations) of such words and phrases or may be identified by statements to the effect that certain actions “may”, “could”, “should”, “would”, “might” or “will” be taken, occur or be achieved. A number of known and unknown risks, uncertainties and other factors may cause the actual results or performance to materially differ from any future results or performance expressed or implied by the forward-looking information. These forward-looking statements are subject to numerous risks and uncertainties, certain of which are beyond the control of the Company including, but not limited to, the impact of general economic conditions, industry conditions and dependence upon regulatory approvals. Readers are cautioned that the assumptions used in the preparation of such information, although considered reasonable at the time of preparation, may prove to be imprecise and, as such, undue reliance should not be placed on forward-looking statements. The Company does not assume any obligation to update or revise its forward-looking statements, whether as a result of new information, future events, or otherwise, except as required by securities laws.

Click here to connect with Primary Energy Metals (CSE:PRIM) for an Investor Presentation.

Top Uranium Stocks of 2020 on the TSX and TSXV
Uranium Mining in the US
Energy Fuels Applauds U.S. Government’s Commitment to Reviving and Strengthening U.S. Uranium Mining; Will Host Webcast on April 24
5 Top Weekly TSXV Stocks: Roscan Up Over 40 Percent on Gold Drilling