Go Cobalt Mining Corp. (CSE: GOCO) (“Go Cobalt” and/or the “Company”) is pleased to provide an update regarding the analysis of its radiometric survey on the 100% owned Copper Cobalt Monster Project (“Property”) in the Yukon, Canada.

Go Cobalt Mining Corp. (CSE: GOCO) (“Go Cobalt” and/or the “Company”) is pleased to provide an update regarding the analysis of its radiometric survey on the 100% owned Copper Cobalt Monster Project (“Property”) in the Yukon, Canada.

Highlights from the Survey:

The Monster Property is a 6,300 Hectare IOCG copper cobalt property in the Yukon Territory north of Dawson City. During the 2018 field program an airborne radiometric survey was flown by Precision Geosurveys. The data was further processed by Southern Geosciences.

Alteration and zonation in the Arena

The km-scale alteration zone over the Arena appears as a bullseye on a Property radiometric map and makes this a priority target for future exploration. The Arena has seven surface showings with historical grab samples that have yielded up to 1.34% cobalt and 44.8% copper.

Go Cobalt’s 2018 radiometric survey highlights these zones occur within a radiometric high of thorium and potassium. The entire zone is bounded by a zone that is high in potassium and uranium. The zonation occurs over 4 kilometres, indicating a potentially very large mineral system on the Monster Property in the Arena alone. 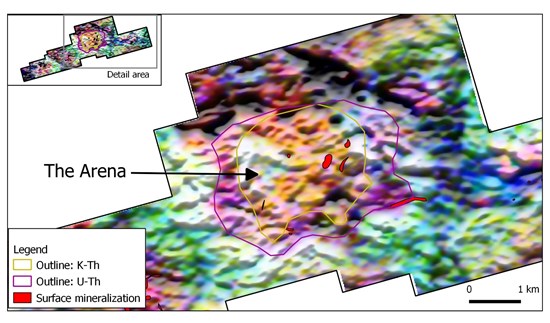 Figure 1. The Arena alteration zones overlain on a ternary map of K (red), Th (green) and U (blue), and shaded according to total counts.

The radiometric survey has uncovered a completely unexplored target. Several surface showings in the east of the Property lie in an east-west trending belt of low total count (Fig. 2). The belt continues west into a wide valley which was soil sampled in during the same field program and contains many anomalous cobalt samples. The anomalous cobalt in soil is offset by a fault that runs through the valley. 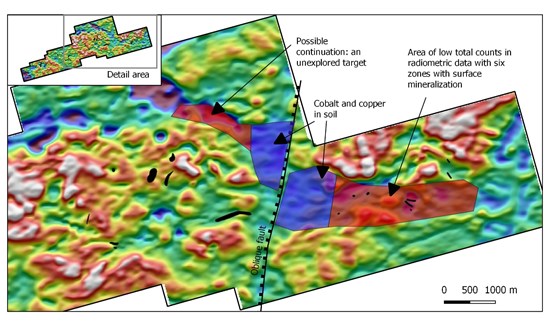 Figure 2. Total counts of radiometrics reveal a zone of low total counts that contains several surface showings in the east part of the property. The zone may continue to the north west as indicated by radiometric, soil, and spectral data.

Go Cobalt is a mining exploration company and seeks to fund exciting and relevant and projects. Our approach is to rely on local talent and respect local territories while maintaining upside exposure to new discoveries. Go Cobalt is focused on developing energy metal projects to help meet the demand for a battery powered future.