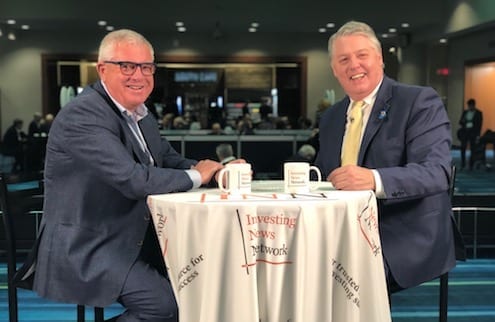 According to Tisdale, 21C Metals has targeted both palladium and cobalt due to their common use cases in modern industries. Palladium is commonly used in the catalytic converters found in internal combustion engines, while cobalt has been recognized as a metal of the future due to its importance in lithium-ion batteries. By targeting elements on both sides of the electric vehicle movement, Tisdale feels his company has optimally positioned itself to serve growing vehicle markets of all varieties.

21C Metals also owns the East Bull palladium project in Ontario, Canada. According to Tisdale, the company intends to continue drilling efforts on the property in order to further expand the potential resource on the property. To date, drilling results at East Bull have returned a 43-101 compliant resource estimate of 11.1 million tonnes of mineralized material at 1.46 grams per tonne palladium equivalent for a total of 523,000 ounces of palladium.

Below is a transcript of our interview with 21C Metals President and Director Wayne Tisdale. It has been edited for clarity and brevity.

Investing News Network: Before we get started, tell me what your symbol is and what exchange you’re on?

21C Metals President and Director Wayne Tisdale: I’m on the CSE and the symbol is BULL, B-U-L-L.

INN: Is that because you’re bullish on both palladium and cobalt or is it just a good name?

WT: I’m very bullish on both palladium and cobalt and that’s why we chose both of them: a metal of today and a metal of the future.

WT: It scrubs it. It basically scrubs the air. There aren’t many grams in a catalytic converter. It’s very small and it seems to take the emissions out and scrub them.

INN: What role does palladium play in the green economy?

WT: It’s a rare commodity, and it’s gone up in price dramatically over the last year. There’s been a lot of talk about how it will eliminate itself with the electrification of cars, because there is no catalytic converter in electric vehicles. However, most of the electric cars have a hybrid component to them, so you are not going to wake up one morning and everything will be electric. You’re going to have a hybrid point, so that takes the catalytic converter a long way and it takes palladium with it. I think it’s got a six or seven year run.

INN: It’s my understanding that we’ve been in this conversion process for 15 to 20 years already and it could take another 60 or 70 years before we move away from gas– or diesel-powered vehicles.

WT: That’s correct. However, Europe has become more intense about not building any more internal combustion engines, like in Germany. That’s the way they are going and they’re more capable of doing that than we are because in Canada we have longer distances to travel so the electric car doesn’t give you that huge amount of distance.

INN: If we take a look at emerging markets like India and China they’re not going electric right now, and they do not have the ability to deliver the electricity for a population that size. I think it’s absolutely fascinating that we get hung up on the fact that it’s going to be electric in a matter of years, but it’s not.

WT: There’s a lot of controversy over the battery — that it’s going to reduce the amount of cobalt in the battery.

INN: That’s a dangerous thing to do.

WT: It could cause fires. It has in the past. So, I think we are good in the cobalt market. Cobalt is a very fascinating product. Most of it comes from the Congo, and that’s a little bit suspect, the child labor stuff is bothersome. What cobalt does is take a copper mine and make it very profitable. Where we are on the German-Czech border with our project, we’re a copper mine with a good supply of cobalt.

INN: Let’s talk a little more about that project.

WT: The project was sort of in a time capsule when we found it. It first started producing copper around 1300. There were reports of up to 10 percent copper and then they put a head rim in 1897. Then along came the Austrians and Hungarians, and it got caught in the first world war and it was shut down.

Later, when the Czech government put it in production, they produced 500,000 tonnes before shutting it down and processing the copper on a tin mill. So, it wasn’t really a good representation. Then, after the wall, it sat, so we packaged it up and I bought it from a local guy I knew many years ago. He and his family escaped and came to Canada, he went back and assembled the whole land package. It’s a huge package, 15,000 hectares.

INN: What process did you go through to verify that all this is going to be viable?

WT: I was involved with a company called US Cobalt, and we sold that to First Cobalt (TSXV:FCC) for 149 million and it was a very good trade for us. I was very excited to get back in the business so I picked this project up from Otto and a VMS specialist I have known for years. That’s how we got started, then we spent a couple million dollars putting it together.

INN: Where we at on that project right now?

WT: We’re drill ready, we just got the permits a couple of days ago. So we are going to drill that. We’ve also taken the palladium project on.

INN: And where is the project?

WT: The south side of Sudbury, 60 miles out of Sudbury. It’s a property that’s been drilled, it’s got 500,000 ounces on it indicated and it’s drill ready. We’ve got permits and we are just doing the financing here in the next day or two, then we will start drilling in April.

INN: Let’s say you get the positive results that you want from both projects, where do we go from here?

WT: I’m not a miner, so I’ll be a seller. I was fortunate enough to be the guy that started Rainy River, then you just build the team and they did an amazing job, they took it. I just happened to be the guy in the middle that said, “I have an idea.”

INN: Tell me about the rest of your team.

WT: I’ve got a great team. Garry Clark, our qualified person and senior geologist, he’s the head of the prospect of Society of Ontario. I’ve got Michelle Gahagan, who is a lawyer and worked with me for 12 years. And I’ve got Jamie Newall, who’s a board member from London, where I lived for 20 years, and we’ve worked together. So, I’ve got a really happening team.

INN: As an investor, what’s the opportunity right now?

WT: We’ve got two of the most incredible metals in our sights. Our objective with the palladium is to drill it to a 1.5 or 2 million ounce reserve, then sell it, either in the ground to a producer or a smelter near us. We’ve also got some mining people in line who would probably pay us for that, and there’s good profit in that for them.

The cobalt project, which is called Tisova, it’s a volcanic massive sulfide, so we are looking for around 30 to 50 million tonnes of this material. It’s a big mine, and we’ve got a huge play. So we are going to drill that off starting in the next couple of weeks.

INN: What are some of the considerations when you go into a site that was initially mined in the 1300s?

WT: This one was fascinating for me because there was never any science done. There was zero — they didn’t even map it. We spent about a million and a half dollars doing the science to say, “okay, we’ve got to drill harder.”

INN: Because you have to validate it.

WT: All of it, and it was fun to watch that go through and dig around. It’s in a beautiful part of the world, it’s just rolling hills and farmland. We don’t have to have a helicopters. There’s a train line that goes 500 meters away; we can send our concentrate on it. It’s all there.

INN: You’re doing a good job of containing your enthusiasm, but I can see that you’re quite excited about this project.

WT: I am. I love this sort of stuff. People ask me if I should retire and I say “no, no, I’m just getting started.”

INN: Especially if you can find a couple of properties like this. Thank you very much.

The information contained here is for information purposes only and is not to be construed as an offer or solicitation for the sale or purchase of securities. Readers should conduct their own research for all information publicly available concerning the company. Prior to making any investment decision, it is recommended that readers consult directly with 21C Metals and seek advice from a qualified investment advisor.

2 responses to “21C Metals President Wayne Tisdale: Cobalt a Metal of the Future”