Potash is an umbrella term that covers all the bases when looking at potassium-bearing minerals. Here is a quick look at the four variations of potash that investors come across most often. 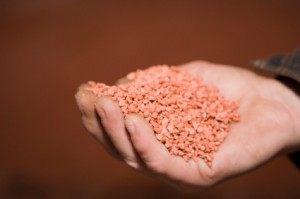 Potash is an umbrella term that covers all the bases when looking at potassium-bearing minerals. These minerals are found in large evaporate deposits from ancient lake and sea beds or in rock formations. It is important for investors to understand that there are different types of potash deposits and that each variation of the mineral has a different use.

If a company ever uses the words “regular potash,” investors should know that it is referring to sylvite, which is the mineral name for potassium chloride (KCl). In the potash world, KCl is also known as muriate of potash (MOP). Sylvite, according to IC Potash’s president and CEO, Sid Himmel, is primarily used for carbohydrate crops because the chloride is somewhat “toxic” to color, taste and aroma — which doesn’t make for very appealing food. Furthermore, MOP does not perform well in situations where there is high soil salinity. Luckily, the majority of carbohydrate crops are eaten directly by animals and not humans. In cases where these products are intended for human consumption — for instance with wheat — the crops aren’t served as is. Instead, the end result has been significantly altered to make the product look and taste better, as is the case with bread.

MOP accounts for the largest potash market, with production of over 65 million tons a year. As far as pricing is concerned, MOP is the standard price that investors see quoted most often. Current MOP prices are roughly $400 per tonne.

Sylvite is the most common occurring form of potash, with massive deposits found in the United States. However, the largest known deposits of sylvite come from Devonian evaporite basins in Saskatchewan, Canada.

Investors should also note that when sylvite is found mixed with sodium chloride, the mineral it creates is called sylvinite. This mineral is a variation of sylvite and also an important source for potash.

Since chloride has adverse effects on the aesthetics of food, when it comes to fruits and vegetables, farmers use polyhalite, a potash mineral that contains sulfate. Polyhalite deposits occur in sedimentary marine evaporites; for the most part, they can be found in New Mexico‘s Carlsbad district.

Polyhalite is known to the market as sulfate of potash (SOP). SOP is the second major form of potash; it has a total global market size of roughly 5.5 million tons per year. Because deposits of SOP are harder to find, it is generally a manufactured product, and also a higher-quality product, making the price roughly $200 more per ton than MOP.

Carnallite was once the go-to form of potash, according to ProEdge Wire. This form of potash is made up of potassium magnesium chloride and water. However, these compounded minerals make it a tricky mineral from which to extract the regular potash. As a result, it is a good type of potash to use only when there is no source of sylvite or sylvinite.

Carnallite is mined for both its potash and magnesium properties. The global distribution of this mineral is fairly vast, with occurrences in the Four Corners region of the United States, including New Mexico and the Paradox Basin in Utah, as well as Colorado. It is also found in Russia, Saskatchewan, Germany and in some regions in the Middle East.

Langbeinite, like carnallite, is a potassium magnesium form of potash; however, unlike carnallite, it does not contain chloride, but sulfate, giving it the name sulfate of potash magnesia (SOPM). Similar to SOP, this variation of potash is used for chloride-sensitive crops, but particularly where there is a magnesium deficiency in the soil.

“The potassium content of langbeinite is very low,” according to Himmel; that helps to keep the price of the product down. Langeinite sells for roughly $300 to $350 per ton.

Furthermore, it is important to note that “langbeinite is primarily a magnesium fertilizer on the margin.” Being so specific in its market, SOPM holds a very small percentage of the potash market, with roughly 1 million to 1.5 million tons produced each year.

The earth is made up of many variations of minerals and ores, each with their own unique properties. This list is by no means a complete list and should not be perceived as such. Potash Investing News has only scratched the surface of what is a very long list of potassium-bearing minerals.

Top Stories This Week: Fed Meets and Gold Price Drops, US Steps Up EV Efforts
EV Infrastructure in the US the Next Challenge for a Growing Industry
Discussing Small-scale Nuclear with Atomic Energy of Canada
Athabasca Basin Uranium Companies

2 responses to “Four Kinds of Potash”