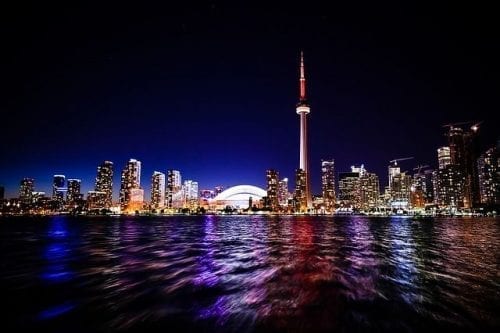 The Investing News Network spoke with Zymeworks CEO Ali Tehrani at the Bloom Burton & Co. Health Care Conference, which was held in Toronto from May 2-3.

With Zymeworks’ (NYSE:ZYME; TSX:ZYME) collaboration agreement expansion with Celgene (NASDAQ:CELG) announced in April, the company now has a total of six active partnerships with big pharma companies, validating Zymeworks’ place on the map with its technology.

Tehrani said this leaves the company “hands free” to be able to develop its wholly-owned therapeutics pipeline, in addition to allowing the companies with existing partnerships with Zymeworks to work on the same or different products.

“A lot of interest has been built on our tools,” Tehrani told INN. Other companies Zymeworks has partnered with includes Merck (NYSE:MRK), GSK (NYSE:GSK), Eli Lilly (NYSE:LLY), Daiichi Sankyo (TYO:4568) and Johnson and Johnson (NYSE:JNJ). The partnerships allow companies to use Zymeworks Azymetric platform to advance therapeutics its respective drug candidates towards clinical trials.

Celgene’s collaboration agreement expansion with Zymeworks will allow the company to increase the amount of potential products from eight to 10 and extend the research program term by two years. Zymeworks will an expansion fee and is eligible to receive up to $164 million in development and commercial milestones, including royalties on worldwide sales for each product—once those milestones have been reached.

The various partnership announcements have made a big impact on Zymeworks’ share price and revenue, but the company is still focusing most of its resources on its own pipeline. The money from the transactions will go into generating next generation biologics. In regards to its own pipeline, the company expects to release new preclinical data in the fall.

Zymeworks has also been chosen as one of the few companies to present at the American Society of Clinical Oncology (ASCO) conference, which will take place in June in Chicago. The company will present an oral presentation on “Single Agent Activity of ZW25, a HER2 Targeted Bispecific Antibody, in Heavily Pretreated HER2 Expressing Cancers,” and is one of two of the only companies—the other being Daiichi Sankyo—chosen from the competitive field of HER2 therapies.

HER2-expressing cancers include breast cancer, gastric cancer and other forms of solid tumors. Zymeworks lead product candidate, ZW25, is being evaluated in Phase 1 clinical trials in the US. It is a bispecific antibody which binds two non-overlapping epitopes known as biparatopic binding of HER2 resulting in dual HER2 signal blockade, increased binding and removing HER2 protein from the cell surface and enhances effector function.

“The field is extremely competitive because the need for breast cancer and gastric cancer is so great and unmet so being in a competitive field is a good thing,” Tehrani said. “For the investors it shows there is demand also being in the lead group of the pack as supported by the ASCO selection committee in terms of the oral presentation.”

The other lead product candidate, ZW49 is in preclinical development also for HER2-expressing cancers and is set to go into the clinical this year in a Phase 1 trial. Tehrani said the company is also excited “about one or more of our partners,” taking Zymeworks tools and platforms into the clinic this year as well, which will lead to milestone payments and additional validation.

This clinical-stage biopharmaceutical company is dedicated to every stage from discovery to commercialization of next-generation multifunctional biotherapeutics. Aside from the drug candidates mentioned, Zymeworks is advancing a deep pipeline of preclinical product candidates and discovery-stage programs in immuno-oncology and other areas.

The company also released its first quarter financial results on May 1, which showed $30,000 less in revenue from the previous year due to a decrease in research support payments from Daiichi Sankyo as R&D activity shifted, as per the agreement.

On May 3, Canaccord Genuity analyst Arlinda Lee reiterated a “buy” rating for the company with $18 price target.

“More deals could be possible,” said Tehrani. “We’re definitely having a lot of discussions so we’ll see if they materialize this year.”

As Tehrani told INN, some of Zymeworks’ milestones to look forward to this year include the ASCO conference oral presentation, ZW49 moving into the clinic as the next stage of development, and reveal of a new preclinical pipeline, possibly in the Fall, which may prove to be key interests for Zymeworks’ investors.