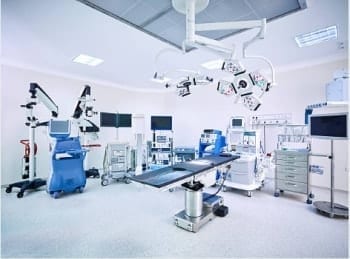 At roughly the halfway mark of the year, here the Investing News Network looks at the 5 top performing medical device stocks year-to-date.

Wait times to see doctors have risen 30 percent since 2014 in the US. Companies working to build medical devices could lower these wait times by automating checkups, and eventually surgeries.
As technology continues to advance, so does the need for high-end innovative medical devices. It’s still unclear whether the medical tech can effectively reduce costs and increase productivity, as it was responsible for 40-50 percent in annual cost increases according to Forbes. The return of the medical device excise tax in 2018 may persuade investors to steer away from the medical device sector, but if successful, companies producing medical devices, such as surgical robotics could be a promising investment. Dominantly, gains are still made in the US, but this could shift as expansion takes place through consolidation and collaborations in the industry.
Moving into 2018 to give investors insight, the Investing News Network (INN) is profiling top medical device stocks on the NASDAQ of 2017. Companies listed below have market caps of less than $500 million. Percentage gains reflect year-end figures as of December 29, 2017, with market cap and share price figures current as of market close on January 18, 2018, with data compiled from Google Finance. The top medical device stocks NASDAQ list was obtained thanks to a list from NASDAQ of small and micro-cap companies.

Market cap: $388.36 million; current share price: $23.81; 2017 percentage gain: 263.08 percent
Again, Pulse Biosciences is the top medical device stock on our list. In September the company faced low point when they voluntarily withdrew its initial application to the FDA for it’s 510(k) clearance of its PulseTxTMSystem.
The decision was made because they were unable to provide the FDA with requested information in their 90 day period. The press release included a plan for resubmission in the coming months.
Additionally, in the end of September, Pulse Biosciences entered a stock purchase agreement for the purchase of 2 million shares of the company’s common stock at a price of $15.02 per share. The agreement was made with Robert W. Duggen, an accredited investor and experienced life sciences executive.

Market cap: $157.33 million; current share price: $22.90; 2017 percentage gain: 186.96 percent
New to the list is IntriCon, who works to enhance mobility and effectiveness of miniature medical, hearing health and professional audio communication wireless body-worn devices.
The third quarter results showed net sales rose to a record high of $24 million, up 54.4 percent from the prior-year third quarter. The rise in sales were a result of the company’s focus on hearing healthcare initiatives, which delivered a 53.8 percent year-over-year growth. As they continue to grow as a company through their products like hearing aids, IntiCon should continue to improve and develop new devices to increase sales.
IntriCon reported third-quarter diluted net income per share of $0.15 compared with $0.19 loss in the same quarter in 2016.

Another newcomer to the list, Sientra, is aiming create an innovative range of products for breast implants, breast tissue expanders, and silicone scar treatments. They have the first FDA-approved shaped breast implants and the first FDA-approved 5th generation round breast implants.
Due to an increase driven by the company’s acquisition of the Speciality Surgical Products tissue expander portfolio. Sales in the second quarter increased by $2 million for the same period in 2016.
The third quarter showed the company is now consolidating financials from miraDry, an acquisition that was completed on July 25, 2017. Net sales for Breast products totalled to $7.7 million, increasing 17 percent from the same quarter of the previous year.

Market cap: $92.28 million; current share price: $8.56; 2017 percentage gain: 54.27 percent
Lower on the list this time, Nuvectra is focused on reducing the complexity of medical devices for clinicians and patients. They do this by developing products with intuitive design and simplified features.
“I am encouraged with our results this quarter, specifically our U.S. Algovita sales activity, highlighted by 25% sequential quarter over quarter growth. With respect to our MRI progress, we have received FDA feedback and are evaluating our responses to the Agency,” said Scott Drees, CEO, in the press release.
The revenue from the third quarter increased 102% from $3.8 million in the third quarter of 2016 to $7.6 million.
Don’t forget to follow us @INN_LifeScience for real-time news updates!
Securities Disclosure: I Gabrielle Lakusta, hold no direct investment interest in any company mentioned in this article.

**This article is updated frequently. Please scroll to the top for the most recent information**

5 Top Medical Device Stocks on the NASDAQ Year-to-date
By Bryan Mc Govern, July 12, 2017
With an aging population demand for the medical device sector increases and so companies in this area can find profits as they provide care for patients in need of treatment. 2017 has already seen an increase in sales and an expectancy of continued success for companies in developed markets.
The US and Europe represent the largest regions for the medical device sector, both as producers and consumers. Emerging markets have begun to make a lasting impact on the business opportunities available. However, the main gains are still located in the States.
This sector is facing uncertainty in regards to President Donald Trump’s healthcare replacement bill of Obamacare, which seeks to permanently remove a federally imposed tax on the industry many executives and leaders in the industry deemed hurtful.
As investors look ahead to the remainder of 2017, INN profiles the top medical device stocks on the NASDAQ on a year-to-date period. The companies listed below have market caps of less than $500 million. All figures and numbers are current as of market closing time on July 12, 2017, with data compiled from Google Finance. The top medical device stocks NASDAQ list was obtained thanks to a list from NASDAQ of small and micro-cap companies.

Market cap: $443.4 Million; year-to-date percentage gain: 382.46 percent; current share price: $31.36
First on the top medical device stocks list is Pulse Biosciences. This development-stage company highlights the use of their proprietary platform technology, Nano-Pulse Stimulation (NPS) for cellular responses. According to the company, NPS could be used as a treatment of solid tumors and could establish NPS in various applications like oncology and dermatology.
Earlier this year (March 14), Pulse announced it had submitted its 510(k) application to the FDA for the PulseTx system, which features tunable nanosecond pulse generator designed for tissue treatment. Darrin Uecker, president, and CEO of Pulse said this was the first 510(k) submission from the company.
The company also revealed the first treated patient in their multi-center study to inspect NPS treating skin injury seborrheic keratosis.
An investigator for the study Dr. James Newman said the NPS had the potential to give patients a unique option, for skin injuries.

Market cap: $134.45 Million; year-to-date percentage gain: 150.7 percent; current share price: $12.61
The next company on our top medical device stocks list is Nuvectra, whose Algovita Spinal Cord Stimulation (SCS) system has received a European approval CE mark. The FDA also approved it for the treatment of chronic pain.
Most recently the company announced it had filed a regulatory submission with the FDA for full-body MRI-conditional approval for the Algovita SCS system. Nuvectra is expecting to hear back on the potential approval by the end of 2017.
“The addition of a full body MRI-compatibility label will further enhance the product features making the Algovita system more attractive to potential customers and improving our competitive positioning,” CEO Scott Drees said in a statement.
Nuvectra announced its revenue for the first quarter of 2017 had gone up 144.4 percent from last year. Net loss also increased for the company, totalling roughly $13.1 million.

Market cap: $154.5 Million; year-to-date percentage gain: 69.62 percent; current share price: $13.41
Middle of the pack in the top medical device stocks liste is SeaSpine, a company that works on developing effective spinal surgery technology. Their portfolio includes a variety of medical hardware in different categories like cervical use, orthobiologics and thoracolumbar.
As part of a preliminary result report for the second quarter of 2017, SeaSpine revealed it expects revenue to be between $34 and $34.2 million.
“We are executing on our strategy to deliver mid-single digit revenue growth in 2017 while simultaneously focusing on cash conservation,” Keith Valentine, president and CEO said in a statement.
The company announced the official commercial launch of their Mariner Posterior Fixation system, which is designed to reduce the number of trays used during surgery. This system offers surgeons instrument and implant solutions for degenerative and complex spine pathologies.
Valentine said the system “utilizes a modular design that increases surgeon flexibility while reducing the number of trays that need to be brought into the operating room.”

Market cap: $137.49 Million; year-to-date percentage gain: 42.61 percent; current share price: $8.20
Invuity is working on advancing the use of advanced photonics for surgeons to have improved direct visualization of surgical cavities. The company’s portfolio offers a diverse range of dental tools alongside the patent for the Intelligent Photonics technology.
Recently the company provided an update on the commercialization plans of the newly announced PhotonBlade, an illumination tool for dentists performing surgery. Despite “positive market feedback” the company decided to perform a recall on the limited market release due to unintended energy discharges which could cause patient tissue damage.
Invuity expects to improve the device and ship it again during the third quarter of 2017.
The company reported a $17.3 million loss for the first quarter of 2017, while it also made $9 million in revenue, a 41 percent increase from the same period of time last year.

Market cap: $64.69 Million; year-to-date percentage gain: 23.03 percent; current share price: $3.98
Rounding out the 5 top medical device stocks on the NASDAQ year-to-date is iCad, a company that offers cancer computer-aided-detection and radiation therapy for clinicians. One of their main products the Xoft System has received FDA clearance and a CE mark. The iCad technology platform, on the other hand, is a mammography image analysis system.
The company’s stock saw a steady boost as they announced a presentation of the Xoft Axxent Electronic Brachytherapy (eBx) system at a conference for the American Society of Breast Surgeons.
“With the growing worldwide adoption of the Xoft System, an increasing number of clinicians are recognizing that this revolutionary technology offers a safe and effective treatment option for patients with early-stage breast cancer who meet specific selection criteria,” Ken Ferry, CEO of iCAD said in a statement.
As part of their financial disclosure for the first quarter of 2017, iCAD announced a revenue increase of 12.5 percent for a total of $6.8 million. The company reported a net loss of half a  million dollars.
Don’t forget to follow us @INN_LifeScience for real-time news updates!
Securities Disclosure: I, Gabrielle Lakusta, hold no direct investment interest in any company mentioned in this article.