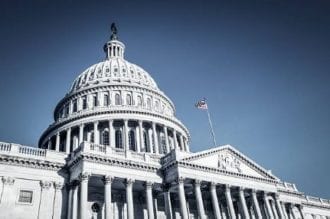 With a final vote of 217 for and 213 against, House Republicans passed a bill to replace Obamacare on Thursday (May 4), to be evaluated by the Senate before going into effect.
The vote for the American Health Care Act was preceded by an irregular proceeding where Speaker Paul Ryan and aides to president Donald Trump attempted multiple times for a new vote after the original bill was pulled, due to a lack of support.
This particular vote took place without a review from the Congressional Budget Office, which scores proposed bills and is often used as a standard analysis for the deciding if a bill should or shouldn’t be made into law. It also estimates the impact and how much the bill would cost.

Read our new 2020 life science outlook report! Get My Free Report
Up until Wednesday (May 3), the bill went through several revisions in order to appeal to the far-right Freedom Caucus and moderate Republicans, who did not agree with the text of the original document.
Now the Senate is tasked with reviewing the bill and voting for or against it. The New York Times reported Republican senators have “aired a variety of concerns” about this replacement, while it was also reported the bill would most likely get a major face-lift compared to what it looks like right now.
One of the most debated amendments to the bill is the fact that insurance companies would be allowed to charge higher premiums to people due to pre-existing conditions including, but not limited to: cancer, anorexia, mental disorders, diabetes, alcohol and drug abuse.
In the end tally, 20 Republicans voted against the bill, a key element that is set to be played out in the upcoming midterm elections. Activists have claimed voters will not let go of this vote, if the bill is set, and many Republicans would face a tougher challenge maintaining their seats.

While an investment strategist told the news outlet the vote hasn’t made a huge splash because of the pending Senate decision, Reuters reported any potential reaction was mild at best.
Some big reaction could come from insurers stocks, as pointed by Nasdaq, and some health-related ETFs like iShares Nasdaq Biotechnology ETF (NASDAQ:IBB) have felt a 1.1 percent decline to 295.07 points, while SPDR S&P Biotech ETF (NYSEARCA:XBI) dropped 1.48 percent to 69.88.
Don’t forget to follow @INN_LifeScience for real-time updates!
Securities Disclosure: I, Bryan Mc Govern, hold no direct investment interest in any company mentioned in this article.

Learn how to invest in life science and medical stocks

Read your free starter guide to investing in life science