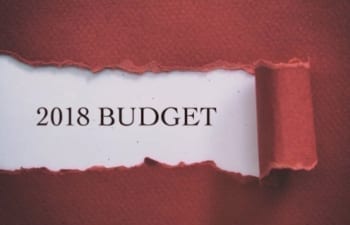 Taxing for cannabis products will come down to two options, whichever is the highest applicable per product, either a $1 per gram standard or 10 percent of a product price.

The newly unveiled 2018 Canadian federal budget announced on Tuesday (February 27) offers cannabis investors a closer look into how the legal product will be taxed in the future.

Delivered by Finance Minister Bill Morneau, the document called “Equality + Growth, A Strong Middle Class,” presented all the spending done by the federal government to regulate the cannabis industry.

The budget indicates an excise duty framework is being proposed for the majority of cannabis products set to be available to consumers after the legalization of cannabis becomes official later this year.

Cannabis products with low amounts of tetrahydrocannabinol (THC) will not be taxed. Neither will pharmaceutical items derived from cannabis, as long as they have a Drug Identification Number and are only available to patients with a prescription.

Taxing for cannabis products will come down to two options: whichever is the highest applicable per product, either a $1 per gram standard or 10 percent of a product price.

“Under the framework, excise duties will be imposed on federally licensed producers at the higher of a flat rate applied on the quantity of cannabis contained in a final product, or a percentage of the sale price of the product sold by a federal licensee.

The proposed tax will kick off once sales of recreational cannabis become available in retail.

A cannabis patients advocacy group, however, expressed disappointment on the Canadian budget. Canadians for Fair Access to Medical Marijuana (CFAMM) issued a statement saying they were “outraged” to find out the limits of the products that won’t be taxed.

CFAMM acknowledge the tax won’t affect products with low to no amounts of THC but said those products are actually a minority among the patient population and represent a small representation of use.

The government will exempt some products such as non-THC and low-THC medicine from the excise tax but those products represent a small minority of those used by patients. “It’s quite clear that Canadians understand that taxing medical cannabis is unfair and wrong,” Jonathan Zaid executive director of CFAMM stated.

“Exempting a small minority of patients does not address the affordability issue and implies some patients are more legitimate than others,” Zaid commented.

The actual breakdown of the tax will be split with 75 percent going to the Canadian provinces and territorial governments. The federal government will keep the remainder 25 percent. However, that sum will be capped annually at $100 million for the first two years after legalization.

All the extra money, in this case, will be sent back to the provinces as part of a special arrangement between the two levels of government. The arranged sums are expected to be delivered to municipalities and local communities due to, according to the budget, their role on “the front lines of legalization.”

Dan Kelly Dan Kelly president, CEO and chair Canadian Federation of Independent Business told Global News he is worried the government is asking for too much with this proposed tax.

“I think a smarter strategy would be to start with a very reasonable level of taxation to ensure that we get the business above ground before we start ratcheting it up,” he said.

A report on the entire budget prepared by business law firm Aird and Berlis indicated cannabis cultivators and manufacturers will now be required to get a license from Canada Revenue Agency (CRA) and “remit the excise duty, where applicable.”

The budget also included information on other areas related to the emerging cannabis industry the government plans to invest in. The Mental Health Commission will receive $10 million over five years to “assess the impact of cannabis use on the mental health of Canadians.”

Another $10 million, also over five years, will be given to the Canadian Centre on Substance Use and Addiction for research purposes.

It was also revealed how much will the government invest in the public education surrounding cannabis per year. Public education will get $18 million in 2018-2019, which then will go up to $16 million from the 2019-2020 cycle until the year 2023, resulting in a total $83 million campaign.

Advocates of the industry have long argued for a complete removal of a tax on medical cannabis products. With the initial comments from CFAMM, it will be interesting to see how companies in the space react to their actions attempting to convince the government to remove the tax on medical products.

Observers of the cannabis space will also have to keep a close eye on the impact the tax on recreational products will have in deterring the illegal marijuana market.