Selected Financial Information
All amounts expressed are in Canadian dollars. 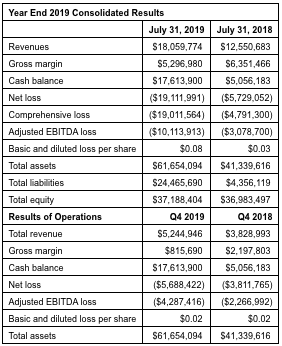 The Company’s $5.5 million growth in revenues over the prior year is attributed to the steady increase in AMA’s number of cannabis plants and total annual plant yield as well as to Infused’s significant product distribution expansion in the United States. Infused’s Canna Hemp™ brand of CBD health and wellness products are sold in over 800 retail outlets across 46 states, and via the Company’s E-Commerce site.

The Company saw a decrease in gross margin from $6.4 million to $5.3 million primarily due to increased purchases by AMA of third-party biomass to produce concentrates and final products. The Company anticipates producing sufficient amounts of biomass from its new facility thereby reducing third party purchases, which is expected to significantly improve the realized gross margins. Partially offsetting the increased costs of AMA, Infused has significantly increased its customer base, which has resulted in improved economies of scale in the production of CBD-based products, positively impacting overall gross margin.

The Company’s net loss for the year is $19.1 million, attributed to a one-time non-cash impairment loss of Spire Global Strategy and one-time non-cash loss on disposal of property and equipment as well as increases in general and administrative costs as the Company continued to scale up its operations and added staffing and resources to support the Company’s growth initiatives. The Company continues to incur costs to support its growing infrastructure requirements.

Significant expenditures during the period include property and equipment expenses related to AMA’s 67,750 square foot cultivation facility and 12,160 square foot production facility in Nevada and the purchase of the remaining 9% of Infused for $5.4 million, of which $1.2 million was cash via a promissory note paid during Q4.

The Company saw an overall increase in expenses as it continues to grow in size and scale.  The realignment of core business units such as cultivation, extraction and manufacturing assets and cost-cutting measures in place along all divisions have been a focus in order to lower expenses.

“Our second year of operations was met by a surge in market volatility, challenging capital markets and a changing regulatory environment. Although not immune to sector-wide stock pressures and volatility, the Company remains positioned with growth and profitability in mind and we continue on target on this path. We are razor-focused on continuing to ensure the long-term viability of the Company. We have implemented cost cutting measures aimed at reducing our current operating expenses, improving efficiencies and strengthening our product offerings while building a sustainable foundation.

Exceeding expectations, we increased revenues by 44% from our previous year while awaiting our new cultivation facility to become operational. We oversaw a 130% growth in revenues for our CBD brand portfolio, as well as a 245% increase of cash to execute on our growth plan. By the end of this fiscal year, we had completed the construction of one of Nevada’s largest indoor cultivation facilities for premium craft cannabis and had begun to transfer our cannabis plants to the new facility.

Subsequent to the Year End, we entered the California market with a management agreement for cultivation and manufacturing in the state and continue to make progress on our infrastructure projects in Nevada, while targeting promising markets in Arizona and Colorado. Our proprietary Canna Hemp™ brands are emerging as significant players in the industry and continue to grow across the nation. We have also attracted some of the best brands in the industry as licensing partners as we continue to increase market share in Nevada as one of the largest wholesalers of cannabis products to legal dispensaries.

We forecast strong revenue growth in 2020 as we expand our proprietary portfolio of AMA branded THC flower and concentrates, continue innovating our unique, differentiated, quality-based CBD Canna Hemp™ portfolio and as our recently added licensing partnerships bear fruit. We anticipate significant margin improvements as we complete the build-out of new cultivation and production facilities in Nevada and become less reliant on wholesale biomass suppliers. With our focused vision on delivering the highest quality consumer branded goods, we have a disciplined growth path to scale up operations in 2020 and beyond.”

Detailed information on the financials and the management’s discussion and analysis can be found at https://sedar.com/

The Company owns 91% of Alternative Medicine Association, LLC (AMA), and 100% of Infused MFG LLC. 1933 Industries continues to focus its operations in the licensed US cannabis industry as a multi-state operator in Nevada, Colorado and California.

About Canna HempX™
Canna Hemp X™ was named “Best Topicals for Pain” by Herb’s Guide to the Best Cannabis Products on the Planet. Canna Hemp X™ is a CBD sports recovery cream for athletes, bridging the gap between recovery and top performance.
http://www.cannahempx.com
https://herb.co/learn/best-cannabis-products/

Trulieve to donate $20,000 in scholarship funding and $15,000 to support leadership development

Trulieve Cannabis Corp . (CSE: TRUL) (OTC: TCNNF), a leading and top-performing cannabis company in the United States today announced a new partnership with the Thurgood Marshall College Fund (TMCF), the nation’s largest organization exclusively representing the Black College Community. Trulieve will donate $20,000 to help fund several college scholarships awarded to students who are attending one of the organization’s member-schools as part of Trulieve’s diversity, equity, and inclusion initiatives. The $15,000 in talent funding is earmarked to support TMCF’s internship program, reaching a diverse talent pool of students and alumni from their 47 member-schools to provide immersive experiences at Trulieve.

Trulieve Cannabis Corp. (CSE: TRUL) (OTCQX: TCNNF) (“Trulieve” or “the Company”), a leading and top-performing cannabis company based in the United States announced today the opening of a brand-new Florida dispensary, the Company’s 80th nationwide. The new location marks the Company’s first in Tamarac and third in Broward County expanding patient access to Florida’s largest and broadest assortment of high-quality medical cannabis products.

Revive Therapeutics Ltd. (“Revive” or the “Company”) (CSE: RVV, USA: RVVTF), a specialty life sciences company focused on the research and development of therapeutics for medical needs and rare disorders, is pleased to announce an update on the Company’s U.S. Food & Drug Administration (“FDA”) Phase 3 clinical trial (the “Study”) to evaluate the safety and efficacy of Bucillamine in patients with mild to moderate COVID-19.

With its recent $23 million dollar financing, the Company plans to aggressively expand from 14 clinical sites to up to 50 clinical sites to meet the next enrollment goals for the Study in Q2-2020. The Study is a randomized, double-blinded, placebo-controlled trial and the safety and efficacy data analyzed at each interim analysis timepoint of 210, 400, 600 and 800 completed patients are only made available to the Independent Data and Safety Monitoring Board (“DSMB”) for review and recommendations on continuation, stopping or changes to the conduct of the Study. In the event of any serious safety concerns, the DSMB would be notified to determine any risks and provide its recommendations. To date, in this initial 210 interim point there have been no serious safety concerns that required the DSMB to be notified.

HempFusion Wellness Inc. (TSX:CBD.U) (OTCQX:CBDHF) (FWB:8OO) (“HempFusion” or the “Company”), a leading health and wellness CBD company utilizing the power of whole-food hemp nutrition, is pleased to announce that its common shares have been approved for DTC full-service eligibility in the United States by the Depository Trust Company (“DTC”) and can now be both traded and serviced through DTC’s electronic book-entry system.

DTC is a subsidiary of the Depository Trust & Clearing Corp. (“DTCC”) that provides clearing and settlement services for the financial markets and settles the majority of securities transactions in the United States. This electronic method of clearing securities speeds up the receipt of stock and cash and thus accelerates the settlement process for investors and brokers, enabling the stock to be traded over a much wider selection of brokerage firms.