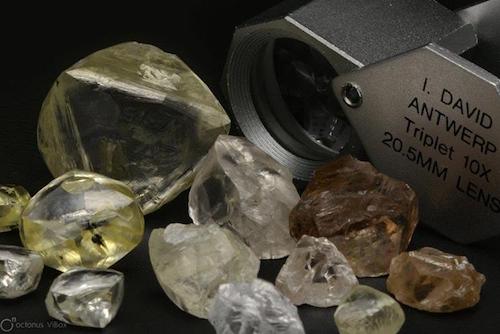 Australian-listed gem miner Lucapa has completed its first diamond tender in Antwerp featuring stones from its Mothae mine in Lesotho.

Australian-listed gem miner Lucapa (ASX:LOM) has completed its first diamond tender in Antwerp featuring stones from its Mothae mine in Lesotho.

The mine began commercial diamond production during Q4 of 2018; subsequently a 78-carat and a 38-carat diamond were recovered from the site as well as a large amount of smaller gems, which were included in the recent diamond sale.

The initial tender for the new project included 5,411 carats of diamonds and raised AU$5.3 million for Lucapa.

The diamonds were recovered during the plant ramp-up phase in Q4 2018 and in the first month of commercial mining operations at Mothae in January 2019.

During the last quarter of 2018, Lucapa commissioned a new 1.1 million tonnes per annum (Mtpa) plant ramp-up which uses a unique high-efficiency plant able to process the weathered near surface material at the site allowing for the recovery of small stones.

“The strong sales prices achieved for our quality run of mine production, in the absence of a single stand-out stone, represent a great start for Mothae, which augurs well for its future as a producer of exceptional diamonds and its contribution to the Basotho nation,” Lucapa’s Managing Director Stephen Wetherall said in the announcement.

The Mothae mine is jointly owned, with Lucapa possessing 70 percent and the Government of the Kingdom of Lesotho holding the remaining 30 percent.

This gemstone technology reduces the potential for diamond breakage allowing for the recovery of large unbroken diamonds.

“The solid bidding we witnessed in Antwerp for this first commercial parcel has certainly marked Mothae’s arrival on the international scene as a producer of top-quality goods, complementing those from our Lulo mine,” added Wetherall.

The company’s Lulo mine is located in Angola and has been in production since 2015.

To date, the Lulo mine has produced more than 800 specials, which are classified as diamonds weighing more than 10.8 carats. Two of which are the largest diamonds ever recovered in Angola, a 227-carat gem and a 404-carat diamond dubbed the 4th February Stone.

The Angolan mine is also a producer of high-value colored diamonds, including a 46-carat pink gem and a 43-carat yellow.

Lucapa believes that Mothae also has immense potential to be a world-class diamond mine. The company has plans to increase production at the Lesotho mine to 2.2Mtpa in 2021 under phase two of its development strategy.

Shares of Lucapa were down on Wednesday (February 27), trading at AU$0.18.