This Thunderstruck Resources profile is part of a paid investor education campaign.*

The Pacific Ring of Fire is home to a 12,000 km trend that contains rich gold and copper deposits. And while various countries located along the Ring of Fire have established mining industries, Fiji remains a hidden gem for the mining industry — one that’s ripe for exploration, development, and production.

Fiji is a country composed of over 300 islands and is best described as a hotbed for seismic activity. Fijian islands like Viti Levu, when combined with historical seismic activity, present favorable conditions for mining. In fact, Viti Levu contains an estimated 5.2 million ounces of gold and 4.9 million tonnes of copper. Plus, Fiji features an 80 year history of mining on the island, possesses an experienced mining workforce, robust infrastructure and a mining friendly government.

Thunderstruck Resources (TSXV:AWE,OTC:THURF) is a Canadian mineral exploration company with a promising portfolio of projects located on Fiji’s main island of Viti Levu. Recent and historical exploration data of these projects has confirmed the presence of zinc, copper and precious metals mineralization. This diversified project portfolio allows investors exposure to each of these markets. Thunderstruck Resources is led by a strong, experienced management team with decades of applicable experience in geology, mining and international finance. 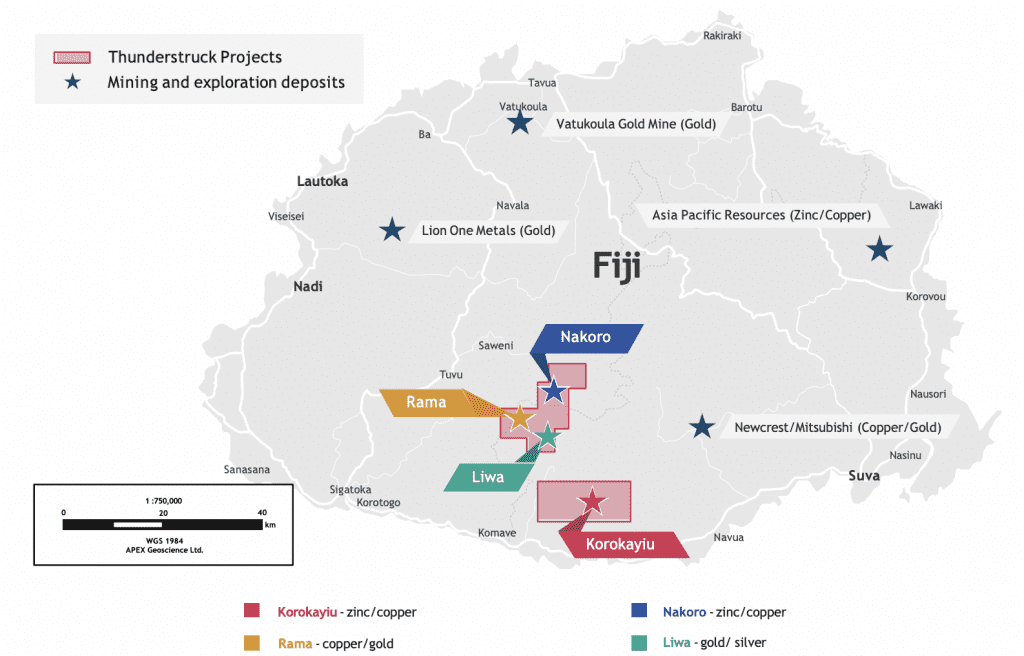 According to Bryce Bradley, Thunderstruck’s CEO, Fiji presents the perfect opportunity for Thunderstruck Resources investors.  In an interview with Adelaide Capital, she explains, “Fiji is really underexplored because of its remoteness. People were wondering, why invest in something so remote? Well, it’s precisely because it’s so remote that it has not been picked over and that it’s ripe for exploration. The Vatukoula Gold mine, located near the Thunderstruck projects, has been in operation for over 80 years. This means that there is a skilled labor force, the island is mining-friendly and that there is a fully-developed infrastructure.”

Thunderstruck Resources project portfolio covers approximately 3 percent of Fiji’s main island of Viti Levu. The company’s complete project portfolio consists of underexplored projects that have already indicated the presence of valuable minerals. Liwa Gold, the company’s flagship project has had geochemical and geophysical programs conducted recently, indicating the potential to become a high-grade gold and silver-producing project.  A maiden drilling program and further exploration commenced in the fall of 2021. 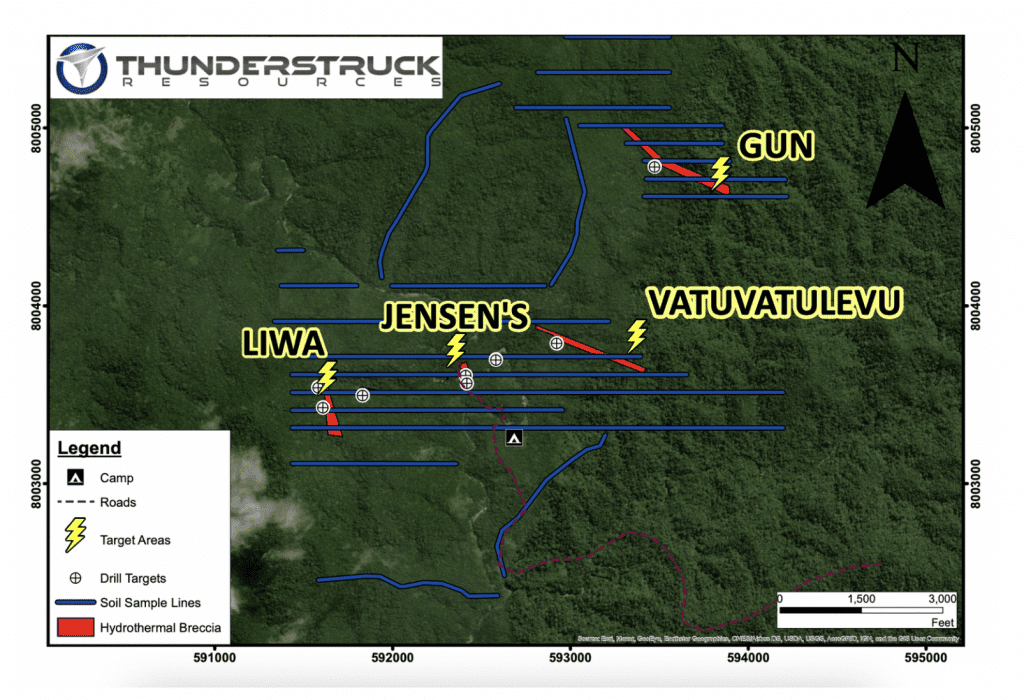 There have been four priority gold zones identified throughout the Liwa Gold project, over 3km, with each area having promising rock and soil sample results that indicate the presence of high-grade gold and silver. Multiple geochemical and geophysical survey campaigns have provided further evidence of high-grade precious minerals.

The project has a five year Special Prospecting License (SPL) and landowner agreements in place, the maximum allowed under Fijian law.  The Liwa Gold exploration project is owned 100% by Thunderstruck Resources and is actively being explored. 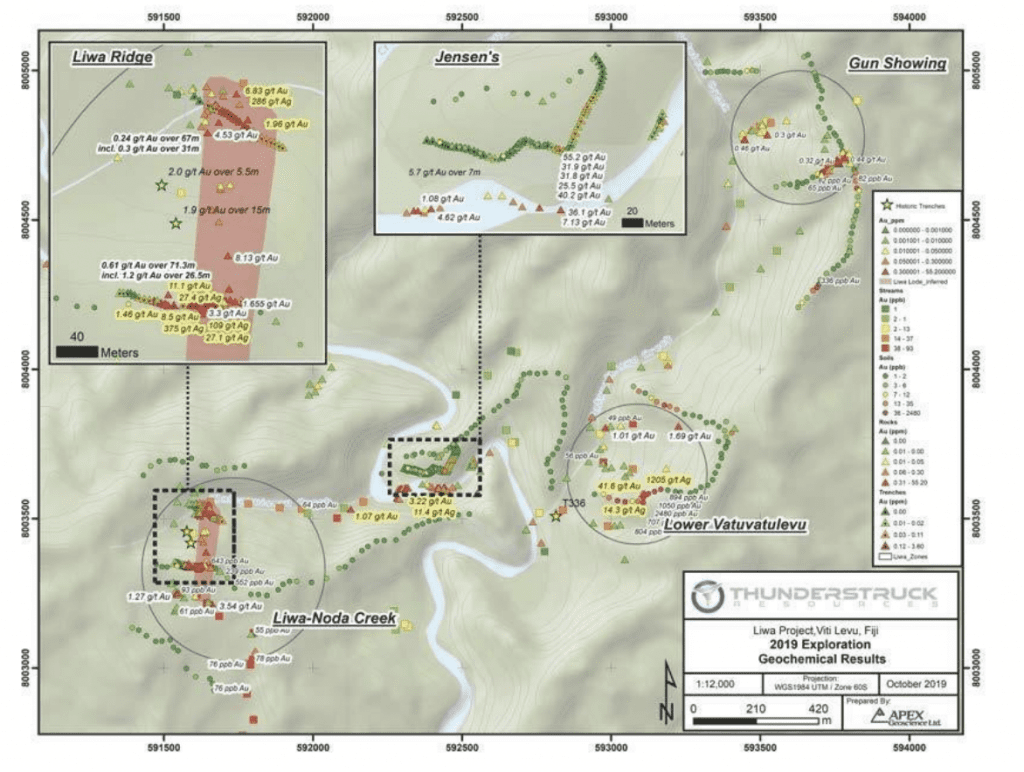 This 136 square kilometer project contains a high-grade zinc-copper mineralization that was discovered and drilled by Anglo Pacific in 1977. The results indicated the presence of a mineralized zone that contained zinc, copper and silver.

Historical drilling on this copper/gold porphyry was conducted by Anglo Pacific in 1975.   Results returned 244m at 0.22 percent copper between six and 250 meters, along with 0.23g/t gold between 6 and 72 meters. Further soil sampling produced similar numbers, 240m average 0.27 percent copper and 0.15 g/t gold. 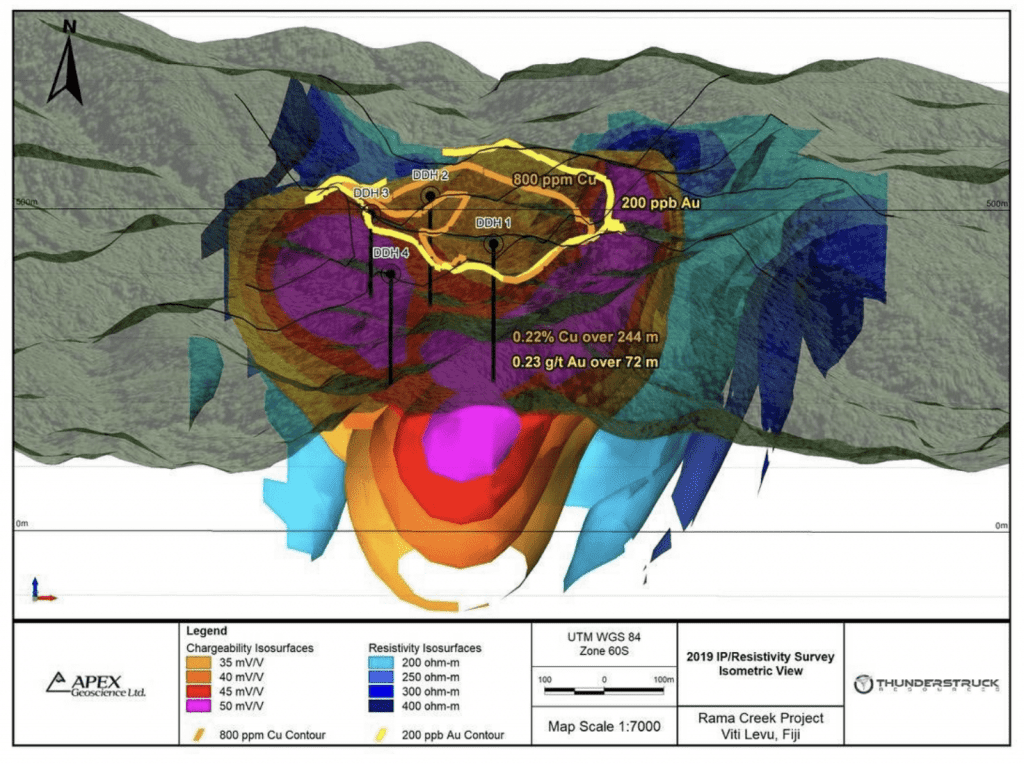 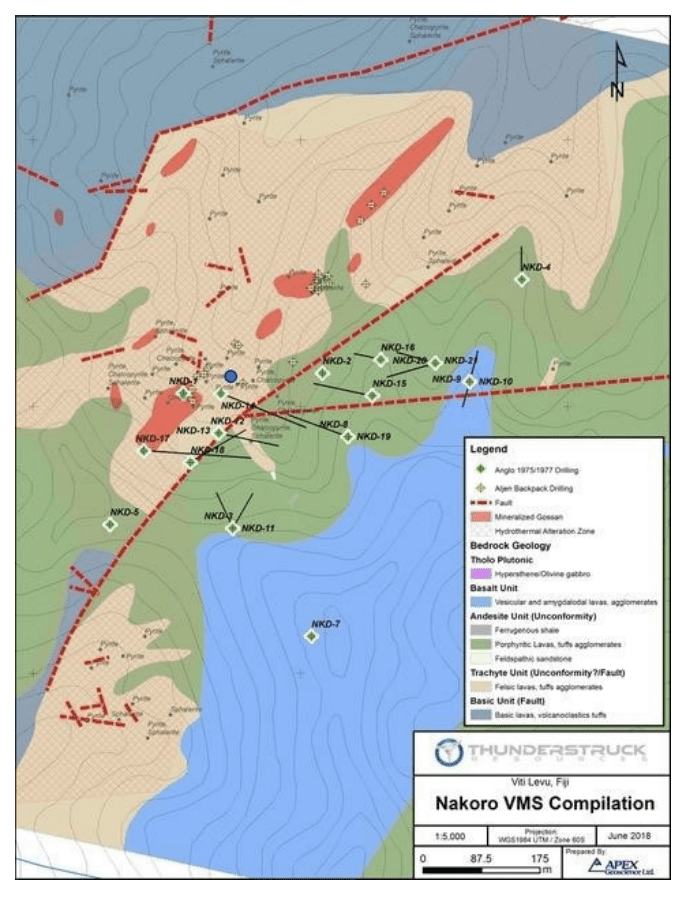 This project is characterized by the presence of a zinc-copper volcanogenic massive sulfide deposit. Anglo Pacific previously intersected this deposit and yielded high-grade values, including 12m at 12.7% zinc and 0.3% copper. This project is 100% owned by Thunderstruck Resources. Nakoro shares similar VMS mineralization to the Korokayiu prospect.

Bryce Bradley (CEO/President) With a strong background in Capital Markets and Investment Banking, Ms. Bradley has facilitated the structuring and financing of dozens of private and publicly traded small and micro-cap companies. She founded and served as President of two Canadian merchant banks focused on capital raising and advisory services for mining exploration companies. Ms. Bradley co-founded and financed Thunderstruck Resources and has served as Director, President and CEO since securing its suite of Fijian assets and taking the company public on the Toronto Stock Exchange in 2013.

Wilson Michael is a Fijian national and has acted as CFO for other resource companies in Fiji. He is familiar with industry-specific accounting requirements and brings a sound knowledge of Fijian business practices and regulatory issues. He previously worked in various roles as an accountant, CFO and manager for a variety of companies in the Pacific Islands, including property developers, international shipping operators, mobile phone companies and local municipalities. He is an Associate of the Institute of Chartered Secretaries and Administrators.

Mr. Christl is an early supporter and long-term shareholder of Thunderstruck. In 2015 he completed his Exempt Market Products Course (EMD), raising money for both public and private companies with Robson Capital, of Vancouver Canada. In 2018 Rob joined Thunderstruck as Investor Relations Manager, building the Company’s shareholder base through direct communication and social media platforms. Rob brings a wealth of capital raising and marketing experience to his role at Thunderstruck, with a vested interest in the Company’s success. During the last year, Rob has been steadily growing Thunderstruck’s exposure in the market by engaging and building relationships with brokers, funds, investors and other industry groups. He will continue to do this in his new role, effective February 2021, as VP Business Development and Investor Relations.

Brien Lundin – Co-Founder and Chairman of the Board

Brien Lundin is a co-founder and Director of Thunderstruck Resources, Ltd. His decades-long career has included analyzing and speculating in the metals, mining and technology sectors. Lundin also serves as President and CEO of Jefferson Financial, Inc., a private company that hosts the annual New Orleans Investment Conference, which is now in its 47th year of educating investors. In addition, he edits and publishes Gold Newsletter, which stands as the oldest continuously published precious metals and mining advisory, having served as the cornerstone of the industry since 1971.

Lawrence Roulston is a mining professional with over 35 years of diverse experience as a mining analyst and consultant. He is Managing Director of WestBay Capital Advisors, providing business advisory and capital markets expertise to the junior and mid-tier sectors of the mining industry. Previously, he was the editor of Resource Opportunities, an independent investment publication focused on the mining industry. Roulston holds a B.Sc. in geology. He is Chairman of Metalla Royalty and Streaming Ltd. and an advisor to Metallis Resources Inc.

Linnea von Hessert is a geologist with over 20 years of experience in the mining industry, having worked for majors and juniors as well as the Bureau of Land Management in Nevada. She is an active investor with significant holdings in the mineral exploration industry. She graduated from the University of Montana with a B.S. in geology in 1999.

The information contained here is for information purposes only and is not to be construed as an offer or solicitation for the sale or purchase of securities. Readers should conduct their own research for all information publicly available concerning the company. Prior to making any investment decision, it is recommended that readers consult directly with Thunderstruck Resources and seek advice from a qualified investment advisor.