For more information, please view the InvestmentPitch Media "video" which provides additional information on the company and this news, along with some comments from Laura Lee Duffett, President and CEO of Tres-Or. If this link is not enabled, please visit www.InvestmentPitch.com and enter "Tres-Or" in the search box.

The planned 5-hole drill program, totalling 1,500 metres, was completed in one week, with each of the 5 holes reaching 300 metres and encountering significant kimberlite, thereby providing more than 10 tonnes of kimberlite sample for mini-bulk macrodiamond testing.

The kimberlite core will provide the sample for the recovery of macrodiamonds by testing at an independent Canadian laboratory. The company has already collected approximately 8 tonnes from the mini-bulk sample that exceeded 10 tonnes and anticipates recovering all diamonds greater than 0.425 millimetres in diameter.

Tres-Or's previous sampling programs at Guigues established that the kimberlite carries closely comparable indicator mineral and microdiamond populations to De Beers' Victor Diamond Mine in northern Ontario. Nitrogen measurements were conducted by the Saskatchewan Research Council Geoanalytical Laboratories Diamond Services on all Guigues microdiamonds larger than 0.15 millimetres, which demonstrated that more than 75% of these microdiamonds lack the impurity nitrogen, making them similar to most of the largest high value diamonds, Type II, ever produced around the world.

The shares are trading at $0.08. For more information, please visit the company's website at www.tres-or.com, contact Laura Lee Duffett, President and CEO, at 604-541-8376 or by email laura@tres-or.com.

Investmentpitch Media leverages the power of video, which together with its extensive distribution, positions a company's story ahead of the 1,000's of companies seeking awareness and funding from the financial community. The company specializes in producing short videos based on significant news releases, research reports and other content of interest to investors.

To view the source version of this press release, please visit https://www.newsfilecorp.com/release/104168

The following issues have been halted by IIROC:

Lucara Diamond Corp. ("Lucara" or the "Company") is pleased to provide operating guidance for 2022 (all amounts in USD unless otherwise stated). Please view PDF version

Mountain Province Diamonds Inc. ("Mountain Province", the "Company") (TSX: MPVD) (OTCQX: MPVD) today provides an update for its 100%-held Kennady North Project. Following staking in early 2020 that increased the Kennady North Project area by 35 percent, three additional claims have now been staked and filed with the government recorder for the Northwest Territories . These new claims are important to Mountain Province Diamonds as they are to the east of significant clusters of kimberlite indicator minerals, as well as the previously identified MZ Kimberlite, both of which require further review. Additionally, the three claims connect the Kennady North land package into one contiguous area which now includes 30 federal leases and 94 claims that total 107,373 hectares and completely surrounds the Gahcho Kué Mine. Mountain Province is a 49% participant with De Beers Canada in the Gahcho Kué diamond mine.

Tres-Or Resources Ltd. (TSXV: TRS) (OTC Pink: TRSFF) ("Tres-Or" or the "Company") is pleased to report completion of the Company's first macrodiamond drill program at the Guigues Kimberlite Pipe in southwestern Québec. The planned 5 holes have been completed to 300.00 m each, providing more than 10 tonnes of kimberlite sample for mini-bulk macrodiamond testing. Four of the holes ended in kimberlite at 300.00 m, and the fifth hole entered metasediment county rock at 262.10 m. The drill was operated 24 hours a day by Forage DCB Drilling Inc. of Rouyn-Noranda, Quebec and finished the entire 1,500 m of HQ (64 mm diameter) core program in one week. 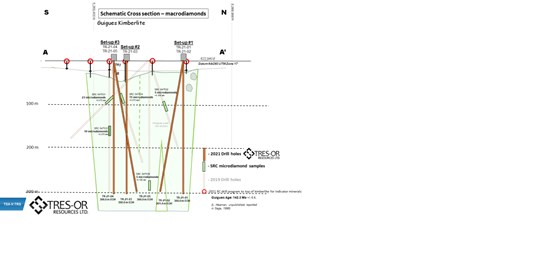 Star Diamond Corporation ("Star Diamond" or the "Company") reports that the unaudited results of its operations for the three and nine months ended September 30, 2021 will be filed today on SEDAR and may be viewed at www.sedar.com once posted. All currency amounts are in Canadian dollars. A summary of key financial and operating results for the three months ended September 30, 2021 is as follows: