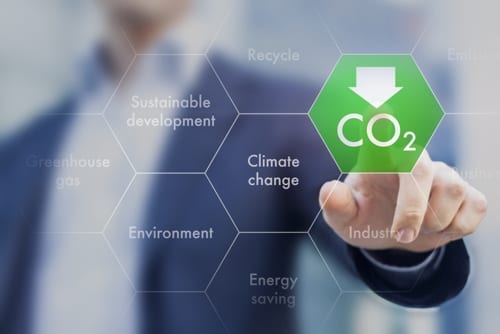 Organically derived renewable natural gas has the potential to significantly reduce GHG emissions in the world’s most carbon-dependent industries.

The reality of climate change is sinking in for much of the world.

Consumers are now shifting away from fossil fuels for their heating and energy needs and moving toward more renewable forms of energy. At the same time, governments are handing down tighter emissions regulations to many of the world’s most carbon-intensive industries.

While wind and solar power are typically at the forefront of the renewable energy mix, renewable natural gas (RNG) is also increasingly being used as an alternative to fossil fuels. Derived from biogas captured at organic waste facilities, RNG can be easily deployed to reduce greenhouse gas (GHG) emissions from the two most critical industries in the fight against climate change: utilities and transportation.

Greenlane Renewables Inc. (TSXV:GRN) is a leading global provider of biogas-upgrading systems that are capable of contributing to the decarbonizing of the natural gas grid and transportation network.Send me an Investor Kit

Conventional natural gas may be viewed as less damaging to the environment than other forms of fossil fuels, but its production and use is still a significant source of GHG emissions. As a pipeline-quality gas, RNG is fully interchangeable with conventional natural gas and can be easily injected into existing natural gas distribution systems or used in natural gas-powered vehicles.

Unlike conventional natural gas, which is thermogenically formed from fossilized organic matter deep in the earth’s crust, RNG is produced from the capturing and upgrading of biogas generated from decomposing organic waste sources such as landfills, dairy farms and wastewater treatment plants. Regardless of its origin, the economic component of natural gas is methane, which is used as a fuel source for generating heat and electricity as well as an alternative to gasoline and diesel for powering vehicles.

“Rather than methane from a coal bed, you’re getting methane from organic waste,” said Scott Gramm, manager of renewable natural gas for FortisBC Energy.

As one of the leading commercial sources for RNG, landfills provide the ideal setting for the production of biogas as bacteria breakdown the organic matter in a compressed and oxygen-deprived environment. Wastewater treatment facilities mimic this environment through the use of a process called anaerobic digestion, in which microbes in an oxygen-free container decompose organic matter in sewage. This process is also used on farms to dispose of agricultural waste such as manure.

Biogas is primarily methane but also contains between 25 percent and 50 percent carbon dioxide as well as small amounts of other gases. Over the years, biogas collection technologies have been developed in order to prevent these GHGs from being released into the atmosphere. Once captured, the raw biogas must then be “upgraded” to the standards required for utilities or vehicle use via a process that involves removing water, carbon dioxide, hydrogen sulfide and other trace impurities. This biofuel is considered a carbon-neutral renewable natural gas because it does not contribute any net carbon dioxide into the atmosphere.

The pipeline-ready biomethane can then be used directly as a clean-burning fuel or converted into liquified natural gas (LNG) for transport to other markets. One example of the commercial production of LNG from renewable organic waste sources is the Altamont landfill in California, the world’s first and largest renewable landfill gas to electricity facility. Altamont’s LNG plant is designed to produce about 13,000 gallons of natural gas each day. This renewable energy source provides fuel for 300 waste transfer trucks, reducing carbon dioxide emissions by approximately 30,000 tons per year and displacing 2.5 million gallons of fossil fuels.

As a carbon-neutral fuel source, renewable natural gas has many environmental benefits over conventional natural gas. RNG production from diverted waste organics reduces the amount of waste going into landfills while also capturing GHGs before they enter the atmosphere. Once cleaned of impurities, the remaining nutrient-rich byproducts can be used as an alternative to chemical-based fertilizers. Of course, the biggest upside is its role in curbing GHG and reducing fossil fuel consumption.

“Methane is a greenhouse gas that is 25 times more potent than carbon dioxide over 100 years, according to the Intergovernmental Panel on Climate Change (IPCC). It is responsible for about 16 percent of global emissions, with agriculture and waste management being two major sources,” Brad Douville, president and CEO of Greenlane Renewables (TSXV:GRN), told the Investing News Network (INN). “Both the production and use of RNG help to reduce GHG emissions, first by capturing methane at the source before it can be released to the atmosphere, and second by repurposing it as renewable energy that can replace conventional natural gas in distribution networks and displace diesel fuel in heavy duty vehicles transporting people and goods.”

The global biogas industry has the potential to cut emissions by 12 percent (or 4 billion metric tons of CO2 equivalent annually) by 2030. However, with only 2 percent of the available organic waste needed to produce biogas currently being captured and recycled, the industry has room to grow. At the COP25 meeting in Spain, the World Biogas Association and its corporate members, including Greenlane Renewables, called upon governments around the world to support the industry in meeting its full potential by 2030.

RNG ideal for utilities and transport

RNG is completely compatible with existing natural gas infrastructure and indistinguishable from conventional natural gas when blended into the pipeline. Industry advocates argue that deploying RNG to meet the world’s needs for cleaner energy is more cost-efficient and less burdensome on consumers than further building out existing electric grids. “In several countries, the gas grid is larger than the electric grid in energy delivered. For example, the gas grid in the United States is 1.2 times the size of the electric grid, while in Canada it’s twice as large and four times larger in the UK,” said Douville.

Renewable natural gas can have a significant impact on reducing GHG emissions in the transportation sector as well, which is by far the world’s largest emitter, accounting for a quarter of CO2 emissions from burning fossil fuels. “When used as a transportation fuel, RNG from food and green waste has a negative carbon intensity, ” according to Deanna Haines, Director of Energy and Environmental Policy for SoCalGas. The use of clean-burning natural gas engines can reduce GHG emissions up to 80 percent.

Some of the world’s largest transport industry corporations are seeing the value of RNG as an alternative fuel source. In October 2019, the world’s largest package shipping company UPS announced it plans to purchase more than 6,000 natural-gas-powered trucks between 2020 and 2022. The company has committed to purchasing 230 million gallon equivalents of RNG over the next seven years, making it the largest consumer of the renewable fuel source in the global transportation industry.

With global warming rapidly changing the planet, governments and industries around the world are working to break the global economy’s dependence on fossil fuels. As a sustainable energy alternative, RNG provides a cleaner, more readily available energy source than fossil fuel-derived natural gas. While the wind and solar markets have dominated the renewable energy space, there is an opportunity for RNG to emerge as an environmentally friendly alternative to conventional natural gas.

The information contained here is for information purposes only and is not to be construed as an offer or solicitation for the sale or purchase of securities. Readers should conduct their own research for all information publicly available concerning the company. Prior to making any investment decision, it is recommended that readers consult directly with Greenlane Renewables and seek advice from a qualified investment advisor.