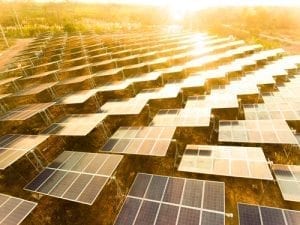 Solar energy is a clean alternative to fossil fuels; however, making the panels themselves comes with an environmental price tag.

The Clean Energy Revolution is all about sustainability from cradle to grave.

Both investors and consumers in this space want the manufacturing process for clean-energy products to have as small an environmental footprint as possible. Otherwise the movement away from fossil fuels will not lead us to a truly low-carbon economy.

Renewable forms of energy such as solar are key to that transition. In 2017, new renewable-energy-generating capacity surpassed that of net new fossil fuel capacity. “We are at a turning point … from fossil fuels to the renewable world,” Erik Solheim, head of UN Environment, told Reuters. “The markets are there and renewables can take on coal, they can take on oil and gas.”

Solar power is the fastest-growing source of that new renewable energy. According to a report published by research firm Zion Market Research, the global solar panel market accounted for US$30.8 billion in 2016 and is expected to reach US$57.3 billion by 2022, growing at a CAGR of 10.9 percent.

The International Energy Agency (IEA) believes solar will dominate future growth in the renewable energy sector, with global capacity in five years’ time expected to be greater than the current combined total power capacity of India and Japan, reports the Guardian. “What we are witnessing is the birth of a new era in solar photovoltaics (PV). We expect that solar PV capacity growth will be higher than any other renewable technology up to 2022,” said Dr. Fatih Birol, IEA executive director.

That increased solar capacity will require more solar panels, and that means more silicon, the material responsible for converting solar energy into electricity.

Silicon is the solar energy metal

Silicon, an excellent semiconductor, is essential in the fabrication of solar panels. Unlike other metals, its conductivity improves as temperatures increase — making it ideally suited for solar-energy generation.

Yes, solar panels do not emit greenhouse gases when they are generating electricity; however, the conventional process for producing solar-grade silicon, or polysilicon, uses harsh chemicals and requires a lot of energy.

According to a 2014 National Geographic report, the entire process results in the emission of greenhouse gases and the production of toxic chemicals. “The dirty little secret about solar panels is that while solar energy as a concept is green because you can generate electricity without generating pollution, you create a lot of pollution during the manufacturing of those solar cells,” Bernard Tourillon, CEO of HPQ Silicon (TSXV:HPQ), told INN. HPQ Silicon owns a portfolio of high-grade quartz properties in Quebec, and with PyroGenesis Canada (TSXV:PYR) is developing a new carbothermic process that has the capability to convert quartz into solar-grade silicon metal in just one step.

Although silicon is one of the most abundant elements on earth, it doesn’t occur freely but rather is found in compound form with oxygen as silicon dioxide (SiO2) or silica. Quartz is the most common form of silica. The conventional process for producing pure silicon from quartz and further refining it for use in solar panels requires a lot of energy and the use of caustic chemicals — leading to the emission of greenhouse gases and the production of the very toxic chemical silicon tetrachloride.

“Traditionally this is a very high-CAPEX smelter process that requires large-size plants and is extremely pollutive because to transform quartz into silicon metal by default you create carbon monoxide,” added Tourillon.

Silicon has a melting point of 1,414° Celsius, nearly that of iron. Freeing silicon from SiO2 requires passing quartz through a carbothermic process (basically adding carbon through extremely high heat) in giant electric furnaces, which in turn requires a lot of energy, notes Fengqi You, assistant professor of engineering at Northwestern University and a co-author of a study on the subject conducted in partnership with Argonne National Laboratory.

Further increasing the carbon footprint of solar-panel manufacturing, coal is often the source of energy used to heat the furnaces, especially in China where the majority of the world’s polysilicon and solar panels are produced. Hence, as the Economist points out, “when a new solar panel is put to work it starts with a ‘carbon debt’ that, from a greenhouse-gas-saving point of view, has to be paid back before that panel becomes part of the solution, rather than part of the problem.”

Nearly all of the silicon used in today’s solar panels comes from the refining of metallurgical-grade silicon using a chemical purification method known as the Siemens process, which involves the use of caustic chemicals, including sodium hydroxide and hydrofluoric acid. This process produces waste in the form of highly toxic silicon tetrachloride.

While most manufacturers recycle this waste to produce more silicon, the reprocessing equipment can carry a hefty price tag — in the range of tens of millions of dollars — leading some companies to dump the waste. Once silicon tetrachloride comes into contact with water it releases hydrochloric acid, which acidifies the surrounding soil and emits toxic fumes.

In an effort to crack down on illegal dumping of toxic waste produced by polysilicon manufacturers, environmental regulators in China shut down operations at several offending factories in 2017. The move sent prices of polysilicon soaring on shortages and spiked production costs for solar panel manufacturers.

Clearly, without sustainably produced silicon, solar panels are not a genuine clean-energy alternative to fossil fuels.

A potential solution to this challenge may come in the form of the fourth state of matter: plasma.

Plasma is a charged gas capable of strong, electrostatic interactions, making it a great conductor of electricity. Plasma’s semiconductive property is why in 2015, HPQ Silicon approached PyroGenesis, one of the largest concentrations of plasma expertise in the world, and inquired about the possibility of using its plasma-based knowhow to transform quartz into solar-grade silicon metal.

PyroGenesis has successfully developed plasma-based systems for the US Navy, including technology that destroys chemicals-based weapons, and has invented a plasma-based process for producing power for 3D printing that is now used internationally.

The resulting cooperation between HPQ Silicon and PyroGenesis led to the development of the PUREVAP™ Quartz Reduction Reactors process, a new carbothermic process that has the capability to convert quartz into solar-grade silicon metal.

In less than 18 months, the PUREVAP™ QRR process has demonstrated the possibility of converting quartz into solar-grade silicon metal at commercial scale in one step.

“Plasma is a very exciting area of technology. Our PUREVAP™ metallurgical process harnesses the advantages of plasma to commercially produce solar-grade silicon directly from quartz,” Peter Pascali, president and CEO of PyroGenesis, told INN. “If you can conduct that transformation in one step using a clean technology like plasma then without a doubt there are significant environmental benefits from that.”

A third-party revenue analysis of the process, conducted by private France-based Apollon Solar, found that at the commercial scale, the PUREVAP™ process could lead to the production of solar-grade silicon at a significantly lower cost compared to conventional processes.

PyroGenesis’ recent GEN2 testing results have validated the commercial scalability of the PUREVAP™ process. “The results we have achieved recently with the GEN2 PUREVAP™ give us increased confidence and assurance that at pilot scale, we will be able to reach significant higher production yields of the high-purity silicon metal that we are targeting,” said Pierre Carabin, PyroGenesis’ chief technology officer.

HPQ Silicon owns the PUREVAP™ technology as it relates to the transformation of quartz to silicon through a binding agreement with PyroGenesis. HPQ Silicon provides the strategic direction, marketing and funding for the project for a 90-percent interest.

HPQ Silicon, PyroGenesis and Apollon Solar are working together to conduct the GEN3 Pilot Plant phase, now in the planning stages, to further validate the commercial scalability of the PUREVAP™ process.

There are of course other factors that contribute to the carbon footprint of solar energy outside of how silicon is produced; for example, in the fabrication of the solar panels themselves. But solving this one challenge may still be a huge step forward for the solar industry and could bring the world closer to a more energy-efficient and environmentally sustainable future.