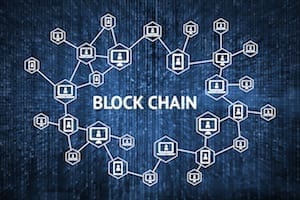 Blockchain is evolving past cryptocurrencies into a technology that may define the next decade.

Blockchain technology has become mainstream. It’s being hailed as the defining technology of the decade by industry experts, and has led to the cryptocurrency craze that’s taking the financial sector by storm. But like the advent of the Internet in the 90s, there’s much more to the power of blockchain than we currently know. Before we go forward to understand the importance of blockchain, for investors, let’s go back in time, to 1994.

The hosts of “The Today Show” Katie Couric and Bryant Gumbel took part in an on-air debate about the pronunciation of the @ symbol. Couric thought it stood for about or around, not at, as Gumbel mocks in the below video. The debate is unimaginable today, but in ’94, email hadn’t yet been established as a daily necessity, and the Internet was a much bigger beast to understand.

Eventually, the segment evolves into a larger discussion about the Internet, leading Gumbel to ask a question that so accurately sums up the 90s: “What is the Internet, anyway?”

Nearly 25 years later, it’s hard to imagine a time in our recent history when the Internet wasn’t part of our lives. But technology is like all of life’s great creations―fashion, music, art―its cyclical nature improves upon elements from the past to develop a better system, and a better future. Today, that system is blockchain.

“Blockchain will be the defining technology of the next decade. In terms of its business application, it’s the new internet,” says Jeff Koyen, Strategic Advisor for 360 Blockchain, (CSE: CODE), an investment firm focused exclusively on early-stage opportunities in blockchain technology. “Much as the web went from a curiosity for geeks to the most important invention since television in just 10 years, these are very early days for blockchain.”

To comprehend the importance of blockchain technology, it will help to open your mind the same way “The Today Show” cast did that morning in ‘94. Blockchain technology exists, it’s not going anywhere, and it will be more important to your life than the @ symbol is to your email address.

This article will help you learn the basics of blockchain technology, and the emerging assets of Bitcoin and other cryptocurrencies that exist because of blockchain, so you can learn what to invest in, and make smarter investments.

What is Blockchain Technology, Anyway?

Blockchain technology was originally developed to process cryptocurrency transactions between two parties on a decentralized network. It’s this decentralized network that defines blockchain. There is no central server that records or stores these transactions . In this way, blockchain has a competitive advantage over, say, traditional banking systems that rely on central hubs that can be compromised by hackers or other malicious players.

Instead, blockchain transactions are held across thousands of computers on the network. There is no danger of information being stolen or retroactively changed, since there is no one central place hackers can break into.

Cryptocurrencies—which operate on their own blockchains—are digital currencies secured through cryptography. Cryptography is the process of converting data to a combination of characters and numbers that can only be decrypted using sophisticated mathematical algorithms and secret keys. For all practical purposes, modern cryptography is unhackable even by the most powerful supercomputers.

The first and most famous example of cryptocurrency is Bitcoin.

Let’s say Bob requests Bitcoin from Alice. Bob initiates a transaction request, and the transaction is sent to the peer-to-peer network of computers that maintain the blockchain. These computers — called “miners” — compete to solve complex cryptographic puzzles that validate the transaction.

The first miner to confirm the transaction is rewarded with Bitcoin (or another cryptocurrency if they’re mining a different coin). Miners are the backbone of the blockchain — they ensure transactions are unique; that each party has consented; and that the blockchain is accurately updated. This process is called “Proof of Work,” not unlike showing your work on a high school math test).

Once Bob’s transaction is confirmed, it’s combined with other transactions to create a new “block” of data. This block of data is added to the “chain” of existing data. Thus: blockchain.

Blockchains are permanent and unalterable. The information on a blockchain can not be reversed.

“It is more probable that asteroids fall on your house than a Bitcoin address is compromised,” according to Blockgeeks.

360 Blockchain Inc (CSE:CODE; FWB:C5B; OTCPINK:BKLLF) invests exclusively in blockchain technologies, as they believe blockchain technology will radically transform how business is conducted throughout the world. The company is based in Vancouver, BC, but has also recently expanded into the US market with its wholly-owned subsidiary in the Silicon Valley, 360 Blockchain USA.Send me an Investor Kit

Decentralized networks hold a direct advantage over traditional systems that record information at a central location. For starters, because every transaction written to the blockchain is immediately distributed to all participants, the record is permanent, auditable and uneditable. These features make blockchain technology attractive for applications beyond cryptocurrency, and into sectors such as global finance, real estate and medical records.

Blockchain is the most exciting technological innovation since the Internet because it is:

An Initial Coin Offering (ICO) is a presale of a new cryptocurrency that a company uses to raise funds. Startups issue their own cryptocurrencies that can be traded online―despite the company remaining private―and sold for real money that serves as working capital. In the early days of ICOs (just three years ago!), ICOs flew under the radar of most regulatory agencies, making them very attractive for companies looking to raise non-diluting capital. This is no longer the case, as the SEC is closely monitoring ICOs to ensure investors are being swindled.The largest ICO to date was held in September 2017 by Filecoin; the company raised $257 million.

Although the term “ICO” is still commonly used to describe the creation of new cryptocurrencies, it’s actually a misnomer. Most new offerings are Token Generation Events, or TGEs. Tokens are cryptoassets that operate on top of an underlying blockchain network. As an analogy, imagine your phone’s operating system: iOS for iPhone, for example; now consider the apps you’ve installed on your phone. In this example, iOS is the blockchain; tokens are applications that run on your iPhone.

Ethereum is credited with kickstarting the TGE craze, thanks to a radically new feature called “smart contracts.” Essentially, Ethereum added a programming language to cryptocurrencies, giving them greater versatility and utility than simple coins. Tokens can have complex, multi-faceted levels of value and, therefore, myriad uses in just about every industry.

For example, consider a real estate title company that programs an Ethereum token to transfer ownership of a property only when a certain price has been paid by Bob to Alice. Or a patient’s medical record might be released to an insurance agent only when certain permissions are granted by the holder of the private key (ie, the patient). These are just two examples. Smart contracts are a transparent, conflict-free way to transfer value while avoiding the services of a middleman, and holding each party equally accountable for the terms of the contract. Their uses are being considered by nearly every sector.

Why Blockchain, Not Cryptocurrency, is the Smarter Investment

Although cryptocurrency is getting all the buzz right now, investing and trading in these markets is still extremely risky. To describe crypto as “volatile” is a disservice; massive fluctuations in price occurring daily, if not hourly. You can follow the movement of thousands of cryptocurrencies at www.coinmarketcap.com. Much of the volatility stems from the uncertainty around regulations and the propensity for pump-and-dumps.

“At a glance, crypto most closely resembles foreign currency trading, and cryptocurrency pairs are bought and sold using dashboards that would be familiar to any E-Trade user,” says 360 Blockchain’s Jeff Koyen .“But crypto actually moves more like the stock market—a completely unregulated stock market, that is. Prices bounce wildly with rumors and announcements, and insider tips are exchanged in private chat groups. Pump-and-dumps are organized by shadowy networks at the expense of newcomers who don’t appreciate the risk.””

Still, for good reason, cryptocurrency trading is irresistible for many. With a total market cap that regularly tops half a billion dollars, there is a lot of money being made. But there’s also a lot being lost.  Without regulation, there is no recourse for those who fall prey to the many scams that plague the cryptocurrency markets.

That’s why most seasoned investors are looking at opportunities in blockchain technology, not Bitcoin and its ilk. Unlike cryptocurrencies, companies developing blockchain properties can offer investors real insights into their operations, such as the management team, market potential, growth opportunity, financial performance and so forth.

“Investing in a company using blockchain is a better option than buying cryptocurrency, but you need to pick the right company,” financial writer Timothy Green tells CBS.

360 Blockchain’s Jeff Koyen agrees. “We’re looking at early-stage startups that are developing non-crypto uses for blockchain. Enterprise platforms for data storage and distribution, for example, where the blockchain tech guarantees integrity but also makes it possible to serve SaaS customers with bespoke products.”

These portfolio companies may, or may not, hold their own TGEs to raise working capital, Koyen adds. “If they do, we will work closely with them to adhere to all regulatory guidelines, and their business focus will remain on building real-world products using blockchain technology.”

If Jeff Koyen is right, blockchain technology will radically transform how business is conducted — delivering security, cost savings and efficiencies at unprecedented scale.

Knowing that every conceivable industry—from energy to finance, government to retail, security to media—could radically improve performance using blockchain technology, the potential for blockchain is limitless. Numbers have been thrown around: $7 billion by 2022, $16 billion by 2025, and as high as $10 trillion by 2033 for the combined blockchain and cryptocurrency tech market, according to RBC.

Google and Goldman Sachs were among the largest investors in blockchain in 2017, and Amazon joined ranks by investing through its AWS portal.

This INNspired article is sponsored by 360 Blockchain Inc (CSE:CODE; FWB:C5B; OTCPINK:BKLLF). This article was written according to INN editorial standards to educate investors.

6 responses to “Blockchain Technology: An Introduction for Investors”