YDX Innovation Corp (TSXV:YDX; OTC:YDRMF; FSE:A2AP0L) (“YDX” or the “Company”), is pleased to announce the filing of its audited annual financial results for the 12 months ended December 31st, 2018.

YDX Innovation Corp (TSXV:YDX; OTC:YDRMF; FSE:A2AP0L) (“YDX” or the “Company”), is pleased to announce the filing of its audited annual financial results for the 12 months ended December 31st, 2018. Complete MD&A and audited financial statements were published and are available on SEDAR. All numbers in this release are expressed in CAD.

YDX Innovation had a year focused on growth and sustainability, creating an important base for 2019. In 2018, through a subscription business model, the Company deployed Arkave VR in the US and in several events in Brazil, creating a new source of revenues for the Company with higher margins compared to the project division and the potential for recurring revenues. The Company applied significant resources in the Arkave VR product, investing in software advances, equipment and events to promote the product in the United States and Canada.

The YDreams Global division delivered more projects and, as the main source of revenue of the Company, also attracted several new clients including Embraer, a new key client for 2019.

Daniel Japiassu, CEO of YDX Innovation stated, “We are very happy with the results and overall performance of the Company in 2018. YDreams Global continues to regularly deliver high end projects for top brands and we have developed a competitive and scalable product, Arkave VR, which has established a strong brand awareness in the US. In 2018 we also reinforced our team but decreased our overhead achieving revenue growth of 32.8% and a significant increase of 302% in terms of gross profit. Our gaming arena Arkave VR was played by thousands of gamers in dozens of events and was mentioned in Forbes as a contender on the Location Base VR race. For 2019 we will continue to focus on growing and continuing being a leader in interactive and immersive technologies.”

Near the end of fiscal 2018, the Company officially launched Arkave VR at one of the most important Location Based Entertainment events in the United States, the IAAPA Expo in Orlando. The product was well received and the first arena for the US was signed and delivered before Christmas. The Company will continue to invest in content development for Arkave VR for 2019 with the main title being the exclusive VR game featuring Mickey Mouse, through a licensing agreement with the Walt Disney Co. The new experience has a release date of August 2019.

The return on investment is intended to be obtained by selling Arkave VR arenas to different facilities, charging annual license fees or receiving a share of revenues earned by every Arena that is opened. The Company is also renting the Arena for events directly or through distributors.

During the year ended December 31, 2018, the Company’s main division, YDreams Global, was actively commissioned to deliver major projects including the following: 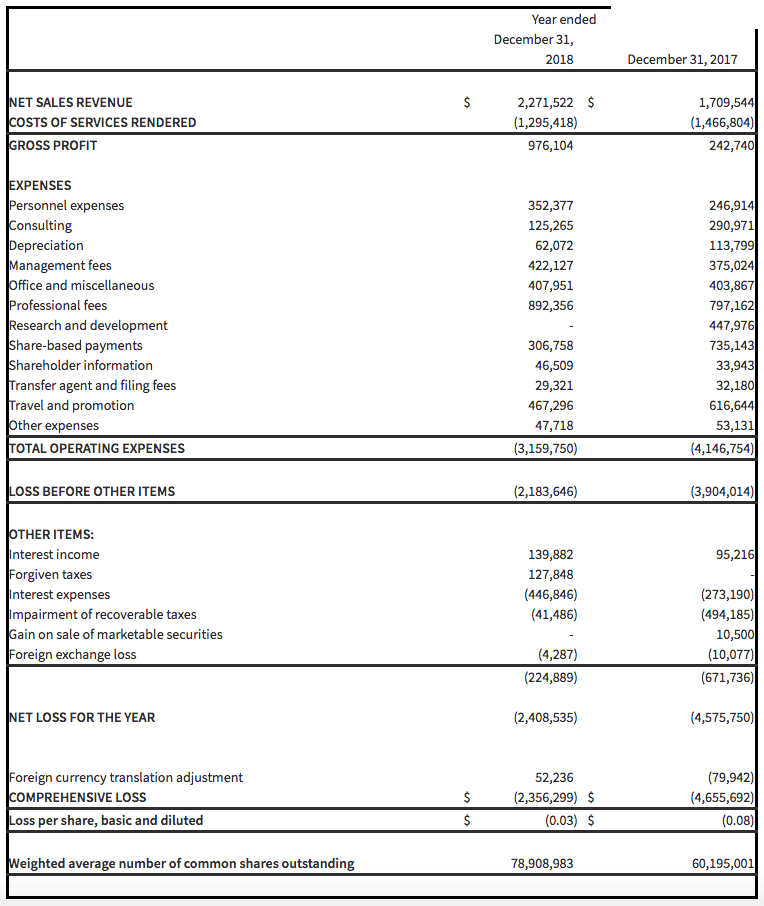 The following table presents selected financial information for each of the last eight quarters. 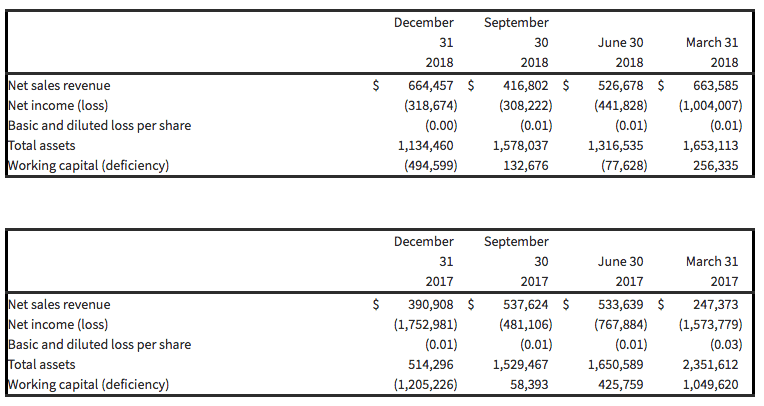 YDX Innovation Corp. (TSXV: YDX www.ydxinnovation.com ) is a technology company that develops products and services and is an expert in immersive technologies like Augmented and Virtual Reality, eSports events and Interactive Exhibitions.

Arkave VR has four Arenas in the United States, a flagship store being built in Canada and is being sold through a network of distributors that will focus on the thousands of Family Entertainment Centre’s throughout North America, in constant search for innovative attractions.