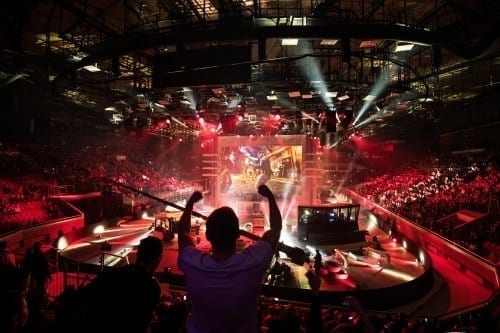 Esports is taking up a much bigger slice of overall revenue in the entertainment industry. For fans of Esports, there’s nothing like battling against competitors in a packed arena for thousands or even millions of dollars.

For fans of eSports, there’s nothing like battling against competitors in a packed arena for thousands or even millions of dollars.

Competitive gaming is growing so fast that eSports arenas have begun to open in some of the world’s most popular entertainment-driven cities, like Los Angeles, London, and New York. And it’s no surprise that Las Vegas, the premier destination for unlimited fun, is the perfect venue for Esports fanatics.

Growth of eSports in the entertainment industry

Revenues in the global entertainment and media market are set to rise 4.2 percent CAGR between 2017 and 2021 ($1.8 trillion to $2.2 trillion) according to PwC, and of that number, eSports represents one of the fastest rising segments of the industry with projected growth to $874 million by 2021 (from $42 million in 2012). As the global interest in competitive gaming increases, tournaments and leagues have become more sophisticated, and prize pools have increased with sponsorship and advertising money now pouring in. Streaming advertising during eSports tournaments grew 35 percent in 2017, and ticket sales in the US grew 19.7 percent from the previous year. But just how mainstream is eSports?

More than 300 million people worldwide watch eSports tournaments, and by 2020, the number is expected to reach half a billion. Amazon recently launched Amazon GameOn, its new cross-platform gaming service that provides developers with the tools to drive engagement, increase monetization and bring more players into the action. Amazon revealed the gaming platform at the 2018 Game Developers Conference on stage with its early adopters, including Eden Games, the game studio arm of mobile video game publisher Millennial Esports (TSXV:GAME,OTCQB:MLLLF). Eden Games is the developer behind some of the world’s most successful racing games, including V-Rally and Test Drive Unlimited and its mobile racing game, Gear.Club, was included in the launch of the GameOn platform.

In 2013, 32 million people watched the championship of Riot Games’ League of Legends on prevailing streaming services Twitch and YouTube. That’s more than the number of people who watched the TV series finales for Breaking Bad, 24 and The Sopranos combined, and more than the combined viewership of the 2014 World Series and NBA Finals.

Gaming was once an industry that was happy to lay low and out of the limelight, but now it’s shining brighter than ever, and finally has the infrastructure back it up.

eSports arenas opening up around the world

Tournaments are traditionally held in temporary settings like movie theatres, college campuses, internet cafes, or at existing sports and entertainment arenas that have been transformed to meet the specific demands of eSports events. But in 2015, the eSports Arena in Santa Ana, California opened as the first to be dedicated to competitive gaming in North America. Its owners, Allied Esports, then announced between 10 and 15 new locations in North America. There are now arenas in major global cities like London, Beijing, Taipei, New York, Las Vegas and Seattle.

In 2017, the Intel Extreme Masters event, held in Katowice, Poland, drew a record 173,000 fans to the multipurpose Spodek Arena. In addition to the fans that attended the event and accompanying festival, another 46 million unique viewers watched online from around the world.

“The development of permanent eSports destinations is fueled not only by the widely held notion that competitive gaming is now mainstream enough to make purpose-built arenas financially sustainable but also from within the professional ranks of the industry, too,”said SportsPro Americas editor, Michael Long. “The belief being that permanent sites will lead to a higher level of tournament quality and production, and yield greater revenues in an ever-maturing market.”

Las Vegas welcomes more than 40 million tourists each year, and in 2017, ten percent more millennials traveled to Vegas than the previous year. Interest in gambling on casino floors is declining, while nearly 50 percent of survey respondents said they spent money on entertainment—such as a sporting event— compared with a third of respondents in 2012.

Staking its reputation as a gambling city, Las Vegas lacked a physical sports presence until 2017, when the NHL’s Las Vegas Golden Knights began playing at T-Mobile Arena; they have proven to be a resounding success, reaching the conference finals in their first year. The team averaged over 17,000 fans during home games, or 103 percent of the arena’s capacity with standing room tickets included, and it ranks fourth in the league in NHL merchandise sales this season. Vegas will also score its first permanent NFL team as early as 2019, with the Oakland Raiders planning to play there when their new stadium is built.

There’s no city in the world that can attract people out to a show like Las Vegas, which is why Vegas is now the home of new eSports arenas as well. The first all-purpose eSports arena opened in Vegas in 2017; it’s a 15,000 square-foot arena from Millennial Esports that hosts year round tournaments in an intimate space with high quality sound, lighting and gaming stations, a VIP section where teams can warm up, a snack station, a 200-seater theatre for viewing, and a main viewing area with a stage and green room for up to 500 people.

“A lot of events had been taking place in convention spaces at hotels, or just at arenas that they convert, like at the MGM. What we have is a purpose-built arena that has been designed by gamers for gamers,”said Millennial Esports CEO Alex Igelman. “The arena has been a fantastic success for us, hosting events for the likes of Amazon, Microsoft and EA Sports. We are now holding our own weekly cash prize races on purpose-built Gear.Club simulators every Thursday to Saturday and the response has been phenomenal.”

Located in Downtown Las Vegas at Neonopolis, a 250,000-square-foot entertainment complex, the arena is close to many popular breweries and tourist attractions, like the pawn shop used in the popular television show Pawn Stars. “The idea behind Neonpolis was to bring downtown Las Vegas into the future,” says Neonopolis owner Rohit Joshi. “The excitement and buzz produced by the arena has been a key part of making that vision a reality.”

The success of Millenial Esports’ arena has inspired further growth in the sector and Las Vegas is now also home to the Esports Arena Las Vegas, a 30,000 square-foot arena custom-built to accommodate eSports events and tournaments.

As visitors to Vegas seek out unique entertainment, eSports arenas’ doors will continue to open and add to the industry’s growth.

There have been few, if any, opportunities in the modern era to invest in a sport as unique as eSports. It combines the competitiveness and fanaticism that has made major sporting leagues successful for over half a century, with technological advancements like the internet, mobile apps and VR, to name a few.

eSports arenas generate revenue for ownership companies through a number of streams, like a daily or monthly membership or subscription model where users are charged to use the facility. A membership could include discounts on events or merchandise as a way to retain members and increase brand loyalty. Other revenue streams include rental fees from event organizers who use the arena, as well as sponsorship and advertising revenue. With the recent repeal of the US Professional and Amateur Sports Protection Act (PASPA) by the Supreme Court, eSport companies are looking at the opportunity to incorporate gambling revenue into their business models.

Companies who demonstrate they are proactive in the eSports industry by building arenas, hosting tournaments, developing technology and partnering with industry leaders can provide an investor with a good opportunity to play the growing eSports market.

One response to “eSports Gaining Ground in the Entertainment Industry”

Comments are closed.
×
See our exclusive index of Mobile companies on the move
EXPLORE