GoldON Resources Ltd. (TSXV:GLD) (“GoldON” or the “Company”) is pleased to report that a total of 1006.5 metres of core drilling has been completed through nine holes on its 100% owned Slate Falls Gold-Silver Project.

This Phase I drill program tested targets at the Trail Zone, and the Sanderson Main, East and North zones (see drill hole location map), where summer sampling and mapping confirmed high-grade gold and silver values (see news releases of June 25 and July 17, 2019). Drilling not only targeted the polymetallic quartz veins but also the shear zones hosting the high-grade veins as little historical sampling was completed on the host-rock both in previous drilling and trenching programs (see news release of November 5, 2019).

Drilling concentrated on intersecting surface sample results approximately 50 metres vertically below while allowing for possible additional parallel shear zones in the footwall and hanging wall within the Slate Falls Deformation Zone hosting a D2 anticlinal fold axis. All holes hit mineralized shear zones at target depth, as well as parallel mineralized shear zones in addition to mineralized and altered feldspar porphyry. Drill hole statistics are presented below in Table 1 and drill target descriptions are as follows:

Hole SF-19-07 was drilled at the Sanderson North Zone to undercut surface sample # 251171 that returned assays of 9 g/t gold and 310 g/t silver. The hole was drilled to depth of 43 m and stopped due to technical issues.

Hole SF-19-08 was drilled at the Sanderson Main Zone to undercut hole S-19-05 which began in a shear zone.

Note: the selected samples referenced above are surface rock grab samples and are not representative of the true grade of mineralization on the Property. 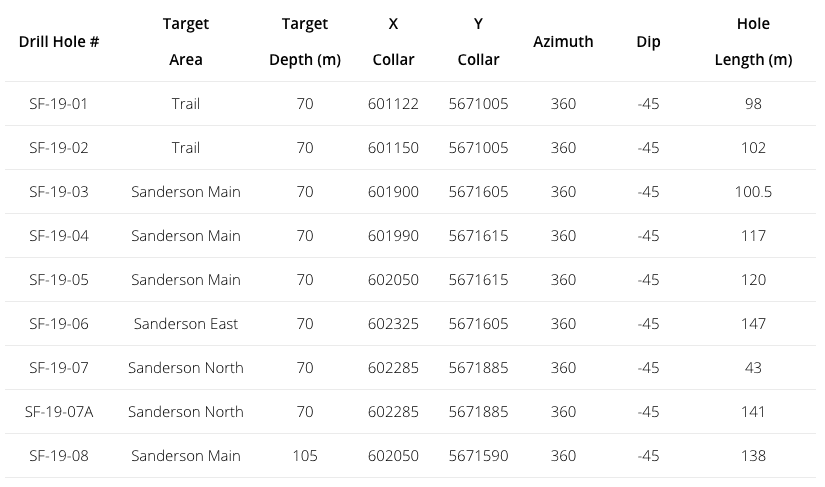 “We are very pleased with our initial drill program on the Slate Falls Property and anxiously await drill results,” said Michael Romanik president of GoldON. “Multiple mineralized shear zones were encountered in the drilling characteristically similar to those historical zones recently mapped and sampled. The widespread deformation and mineralization support our belief that the Slate Falls Deformation Zone is a prominent yet poorly explored crustal scale feature. We’d again like to thank our exploration team and the Slate Falls First Nation for making this program happen.”

Logging and sampling of the drill core has been completed and core samples are being submitted in batches to SGS Canada (Burnaby) for analysis. Results will be reported as they are received.

About the Slate Falls Property

Located in Ontario’s Patricia Mining Division, the Slate Falls Property (the “Property”) lies between the Red Lake and Pickle Lake gold camps within the southwestern extension of the Meen-Dempster Greenstone Belt (see regional map). Several mineralized gold-silver showings have been identified on the Property including the Carpenter, Fly, FTM, J. Loon, L1, L15, Path, Sanderson and Trail Zones. These zones are part of the Slate Falls Deformation Zone and extend for over 10 kilometres (km) in strike and 1.5 km in width within the Property’s boundaries. All zones host high grade gold-silver mineralization and are related to regional fold axes and structures that provide traps for mineralizing fluid (see property map).

Mike Kilbourne, P. Geo, an independent qualified person as defined in National Instrument 43-101, was on-site during the drilling campaign and has reviewed and approved the technical contents of this news release on behalf of the Company.

GoldON is an exploration company focused on discovery-stage properties located in the prolific gold mining belts of northwestern Ontario, Canada. Active projects include the West Madsen property in the Red Lake Gold Camp and our flagship Slate Falls project in the Patricia Mining Division where 18 gold-silver mineralized zones have been identified over the 13-kilometre breadth of the property. GoldON has 15,152,282 shares issued and is fully funded to complete its fall exploration programs.