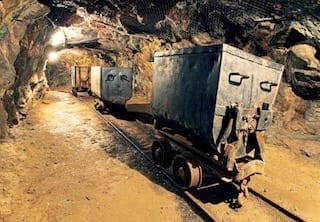 Alphamin Resources (TSXV:AFM) is on track to start production of conflict-free tin at its Bisie project in the Democratic Republic of Congo (DRC) by 2019, the company said on Tuesday (August 22).
Tin mining in the DRC has been linked to conflict, human right abuses and corruption. However, Alphamin is a member of the Conflict-Free Sourcing Initiative, a global group of end-user companies focused on developing conflict-free certification standards and protocols.
“There is a very strong drive by the end-users of tin, tantalum and tungsten and, more recently, cobalt to push for conflict-free sourcing,” Alphamin CEO Boris Kamstra said.


Give me my free report!
The company says Bisie is the world’s highest-grade untapped tin deposit, and is aware that its success will depend on maintaining security in the region and eliminating illegal mining.
“The DRC government has been hugely supportive in that we now have a very strong military presence in our area,” Kamstra told reporters at a Johannesburg briefing attended by Anselme Kitakya, minister of mines for the DRC’s North Kivu province. “In essence we’ve got a military curtain between ourselves and the east of us which is largely unpopulated forest.”
Bisie’s tin reserves stand at more than 3.5 million tonnes grading 4.3 percent per tonne. According to the company, that translates into an IRR of 49 percent based on a tin price of $17,300 per tonne.
“Future tin supply is globally uncertain as inventories are running low and economically viable tin reserves are being depleted. The International Tin Research Institute has forecast that there is likely to be a global shortfall of tin [from] 2018,” Kamstra explained.
Tin prices have been on the rebound this month after reports of smelter shutdowns in China. Prices touched a six-month high of $20,905 on July 28, and have held close to that level since then, closing at $20,525 on Wednesday (August 23).
Meanwhile, shares of Alphamin Resources closed at $0.38 on Wednesday, up 11.76 percent year to-date.
Don’t forget to follow us at @INN_Resource for real-time news updates!
Securities Disclosure: I, Priscila Barrera, hold no direct investment interest in any company mentioned in this article.