Henry Bonner of Sprott Global Resource Investments takes a look at the metallurgical coal market. He cites Sprott Resource CEO Steve Yuzpe as saying that the commodity is cheap and due to improve.

A particular type of coal – called metallurgical coal or coking coal – is used in the process of manufacturing of steel. After reaching a six-year low in its price and recent industry cutbacks to production, metallurgical coal is showing classic signs of a resource that is ready for a cyclical uptrend.

Steve Yuzpe, CEO of Sprott Resource Corp., specializes in finding long-term value plays in the private equity sector. He says metallurgical coal is an out-of-favor sector, and by his estimation, it is cheap and the price is probably due to improve.

At the current low price, more than half of the supply of metallurgical coal is being produced at a loss on operating costs, without accounting for exploration and development costs that must be recouped.

Many industry participants are being wiped out. Steve says many stocks he’s been following in the sector are down over 90% since 2011. Since the 2011 peak, metallurgical coal producer Walter Energy, Inc. is down 96%2. Coal producer Arch Coal Inc. fell by around 91% in the same time period3 and another large producer, Alpha Natural Resources, Inc., fell by over 96%.4

While supply cutbacks are underway, demand continues to grow steadily. Steel production, which drives the demand for metallurgical coal, has continued to rise gradually, growing by 2.4% in 2013 – in line with the average growth rate for steel production of 2.6% per year since 1980.5 Drivers for steel demand include urbanization in emerging economies, infrastructure spending and automotive demand.

We often point out that bull markets begin when shrinking supply encounters steady or rising demand for a commodity. In a bear market, producers cut costs and lower their general and administrative costs. They defer or cancel expansion plans, and put uneconomic mines on care and maintenance. Eventually, the lower supply cannot keep up with demand, which sets off an uptrend in the commodity price and encourages new investment. 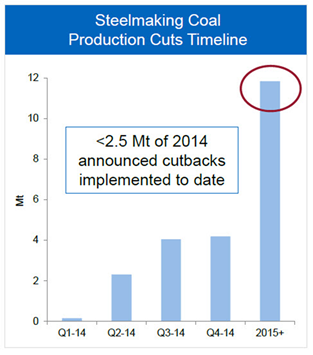 Sprott Resource Corp. is managed by one of Canada’s leading teams of resource private equity specialists. They currently have investments and operations in oil and gas, energy, agriculture and agricultural nutrients. They take an active involvement in the companies where they invest. They are dedicated to generating consistently superior returns on capital for shareholders, while focusing on risk management and real wealth preservation. For questions about Sprott Resource Corp., contact Steve Yuzpe by phone at 417.977.7333 or e-mail info@sprottresource.com, or visit their website www.sprottresource.com.