At the Coal Association of Canada’s 2013 conference, Milton Catelin, chief executive of the World Coal Association, explained why he’s glad coal is set to remain a key part of the world’s energy mix. 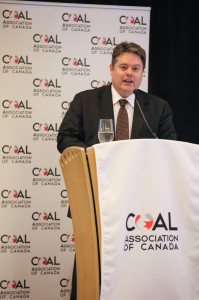 This past summer, Coal Investing News has reported extensively on the coal industry’s problems, which include cost cutting and reduced production from major players, India’s Coalgate scandal and withdrawal of support for the fuel from bodies like the United States, World Bank and European Investment Bank.

Combined, those factors appear to point to a bleak future for coal.

However, according to Milton Catelin, chief executive of the World Coal Association, that is hardly the case. In fact, in a September 12 presentation at the Coal Association of Canada’s 2013 conference, held in Vancouver, he told audience members that, contrary to popular belief, coal is here to stay.

A world built on coal

Catelin’s confidence is based in part on his belief that the world we live in today was built on coal. As he noted at the beginning of his presentation, coal currently provides 30 percent of the world’s primary energy, 41 percent of its electricity and 68 percent of its steel — not numbers to scoff at.

Further, he explained, those percentages are unlikely to change much in the next two decades or so, meaning that, like it or not, coal will continue to be in demand.

No stranger to critics, Catelin realizes that many don’t like it. He acknowledged at the conference that coal has a bad reputation due to the widely held view that it causes global warming and sickness and is responsible for the deaths of many miners.

What people tend not to realize, he said, is that coal is not only key to maintaining the way of life that has been established in the developing world, but is also an important component of improving conditions in developing countries like India.

For example, he explained, China, a model for many developing countries, has seen 536-percent growth in GDP since 1990. The country’s successes include lifting more than 660 million people out of poverty, increasing its steel and cement production by 18 and nearly 14 percent, respectively, and connecting 99 percent of its population to the grid.

That success, according to Catelin, is largely the result of China’s use of coal, and makes a compelling case for support of the fuel.

Following Catelin’s presentation, one audience member asked a question that many no doubt had in mind: if coal is really so great, why is it so publicly maligned?

The reason, Catelin answered, is that environmental lobbyists have been presenting coal as negative for decades, and they are better at getting their message out than coal industry members — especially with celebrities backing their cause. He also noted that as political correctness becomes increasingly desirable, many politicians and organizations are loathe to express support for coal.

That desire not to support the fuel is problematic, according to Catelin, because it means that initiatives aimed at developing and improving clean coal technology (CCT) receive little support. Specifically, although carbon capture and storage (CCS) and CCT provide a quarter of the answer to climate change, CCS is “seriously underfunded” compared to other low-carbon technologies, such as nuclear and renewable energy.

In closing, Catelin reiterated that coal is here to stay, despite what environmentalists might hope. Given that fact, the best path forward is for coal’s opponents to redirect their efforts toward helping make the fuel cleaner and more sustainable.

Coal Giants’ Lay Offs Could be a Boon to Oversupplied Australia